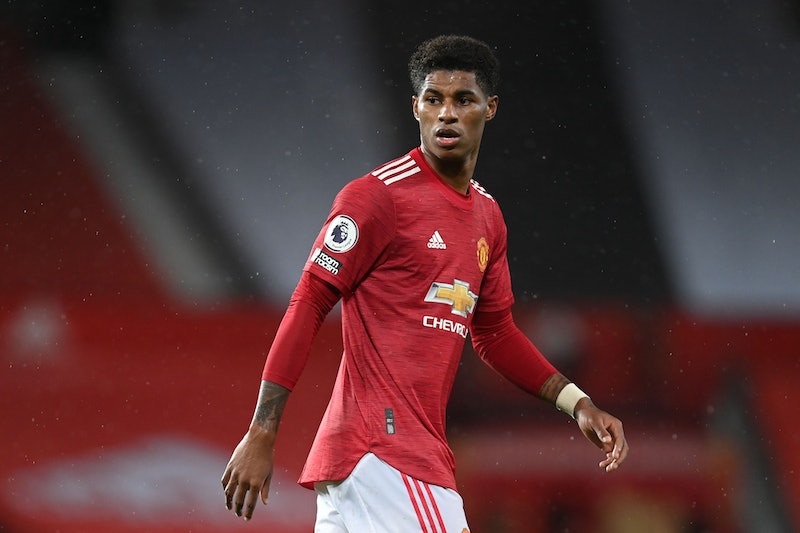 "I’m by no means a politician," said Marcus Rashford in a British Vogue interview last year, "but I had a voice and a platform that could be used to at least ask the questions." The Manchester United footballer and campaigner has emerged as a prominent figure when it comes to ending child poverty in the UK, and it seems the country's law-makers are listening. After sustained campaigning throughout 2020, what's happening now with Marcus Rashford's free school meals campaign?

How did Marcus Rashford get involved with the free school meals campaign?

Back in June 2020, the Department for Education announced its free school meal vouchers would not continue over the summer holidays. In response, Marcus Rashford wrote an open letter to parliament asking ministers to rethink their decision. "As a family, we relied on breakfast clubs, free school meals, and the kind actions of neighbours and coaches," he wrote in the moving address which he shared on Instagram. "Food banks and soup kitchens were not alien to us; I recall very clearly our visits to Northern Moor to collect our Christmas dinners every year."

"This is not about politics; this is about humanity," he added. At the time, Rashford had partnered with charity Fareshare to help "supply three million meals to vulnerable people" during the first lockdown.

Thanks to Rashford's letter, the government decided to provide children eligible for free school meals during term-time in England with a six-week voucher to see them through the summer holidays.

What happened with the campaign during 2020?

On Oct.15, 2020, Rashford launched an online petition calling for the government to provide more children with free school meals and to extend the vouchers scheme until at least Easter 2021. This time, however, 322 MPs voted against the initiative. In response to the government's lack of support, hundreds of UK businesses stepped up to contribute to the Child Poverty Task Force set up by Rashford, with the aim of creating long-lasting change.

It took a while, but Nov. 8 2020 saw another major U-turn by the UK government. Prime Minister Boris Johnson called Rashford to let him know that the government is now pledging more than £400 million to support poor children and their families in England, per BBC.

As part of the funding, £170 million was allocated to a COVID Winter Grant Scheme, distributed to councils with at least 80% earmarked to help with food and bills from December 2020 to this March. There are also plans to expand the Holiday Activities and Food programme across the country next year, while Healthy Start payments are set to increase from £3.10 to £4.25 a week from April 2021. More details about where the money will be spent can be found on the government's website.

At the time, Rashford said he was thankful for the government's change of heart: "The steps made today will improve the lives of near 1.7 million children in the UK over the next 12 months, and that can only be celebrated."

"I am fully committed to this cause, and I will fight for the rest of my life for it, because in my mind, no child should ever go hungry in the United Kingdom," he continued.

On Twitter, he also thanked the campaigners, charity workers, volunteers, teachers, care workers, and key workers who have "fought for this level of progress for years."

"This is YOUR victory," he tweeted. "Never underestimate the role you have all played. I’m just honoured to be on this journey with you."

On Jan. 11, 2021, Rashford, along with other celebrities, as well as politicians, activists, and campaigners took to social media to criticise the quality of some of the food packages being given to families after parents posted pictures of what they'd received.

One parent on Twitter shared a photo of a hamper that was reportedly meant to last them 10 days. It contained a loaf of bread, two bananas, a tin of baked beans, two carrots, one tomato, three Frube yoghurts, two potatoes, three apples, cheese, and two Soreen bars. "Public funds were charged £30. I'd have bought this for £5.22," they wrote. "The private company who have the #FSM contract made good profit here."

Rashford responded, saying it was "unacceptable." He said the poor quality of the food being delivered to families would make learning at home even harder for kids and parents. "Then imagine we expect the children to engage in learning from home. Not to mention the parents who, at times, have to teach them who probably haven’t eaten at all so their children can..."

Chartwells, the company that the parents said had provided the parcel, responded to their tweet saying it would investigate what had happened. "Thank you for bringing this to our attention, this does not reflect the specification of one of our hampers," Chartwells wrote.

The Department of Education also replied, saying "We are looking into this. We have clear guidelines and standards for food parcels, which we expect to be followed. Parcels should be nutritious and contain a varied range of food."

Food writer Jack Monroe, who is known for advocating for issues on food poverty, took to Twitter to reply to Chartwells, saying this was not a one-off incident. "With all due respect, this isn’t the only photo in circulation. Perhaps you could clarify the situation by posting a pic of what your food parcels -should- look like? Because I’ve had hundreds of pics that look just like this one. Over to you."

Monroe was tweeting through Jan. 11 and 12 about the poor quality what was being delivered to families after she received "LOTS of photos of the food parcels" that contained "ill thought through, offensively meagre scraps."

Leader of the opposition Keir Starmer also shared his thoughts on Twitter, writing "The images appearing online of woefully inadequate free school meal parcels are a disgrace. Where is the money going? This needs sorting immediately so families don’t go hungry through lockdown."

More like this
Gen Z Are Twice As Likely To Identify As Queer, According To New Data
By Sam Ramsden
Pret & Costa’s Coffee Is The Strongest On The High Street, According To Which?
By Sam Ramsden
Here’s What TikTok's "Mascara” Trend Is *Really* About
By El Hunt
Ben & Jerry’s New Sundae Flavours Are A Chocoholic’s Dream
By Sophie McEvoy
Get The Very Best Of Bustle/UK
Sign up for Bustle UK's twice-weekly newsletter, featuring the latest must-watch TV, moving personal stories, and expert advice on the hottest viral buys.