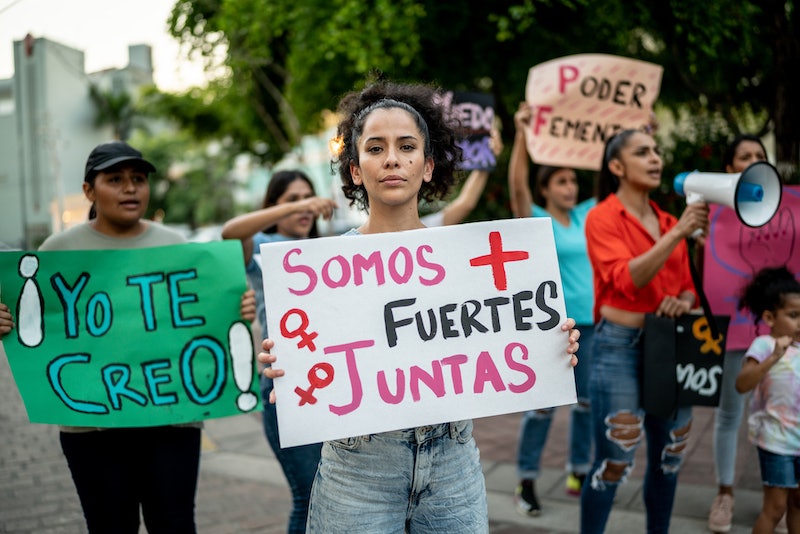 It's been nearly 60 years since the passage of the Equal Pay Act, and there are still vast disparities between how much women make compared to men. This is especially true for women of color. As of 2022, Latinx women are paid only 57 cents for every dollar a white man makes, whereas women overall earn about $0.82 cents to the dollar. While the gap is closing, there is still got a long way to go. One way to show support for financial equality is by donating to organizations that support Latinx Women's Equal Pay Day and other efforts to close the gender wage gap on Dec. 8, 2022.

There are a number of "equal pay days" throughout the year, and each of them is aimed at acknowledging the time it takes for a certain group of women to earn as much as a white man on average. Latinx Women's Equal Pay Day is the last of its kind for the year, as the wage gap is the largest for Latinx women, per the National Women's Law Center.

In 2019, to put it into perspective, a Latinx woman had to work 23 months to earn what a white man can earn on average in 12 months, according to the National Women's Law Center. That adds up to more than $1.1 million lost over the course of a 40-year career. Despite the millions of Latinx women this impacts, nearly half of Americans aren't aware of the wage gap between white and Latinx women, according to a 2019 survey from Lean In.

Fortunately, there are many organizations working tirelessly not only to educate people on this gap but to change it as quickly as possible. Here are nine organizations to support on Latinx Women's Equal Pay Day and beyond.

More like this
25 Inspiring Quotes From Black Women To Celebrate Black History Month
By Kyli Rodriguez-Cayro and JR Thorpe
24 History-Making Black Women You Probably Didn't Learn About In School
By Ayana Lage and JR Thorpe
Twitter Is Identifying With Sally Field & Jane Fonda’s Friendship In New Viral Video
By Jake Viswanath
Ashamed Of Your Screen Time Stats? Here's How To Change That
By Alexis Morillo
Get Even More From Bustle — Sign Up For The Newsletter
From hair trends to relationship advice, our daily newsletter has everything you need to sound like a person who’s on TikTok, even if you aren’t.

This article was originally published on November 20, 2019