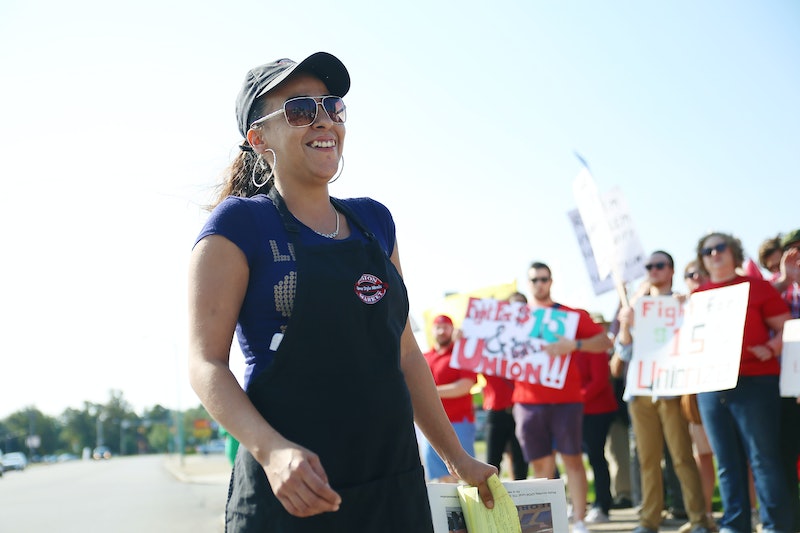 The fight for equal pay is far from over, and for women of color there is even more work to be done when it comes to closing the pay gap. On Latina Women's Equal Pay Day, UFCW International Secretary-Treasurer Esther López explains why this day is more necessary than ever, and how we can work together to make the workplace more equitable for Latina women across the United States.

Latina women are entering the workforce at higher rates than ever before, and joining the ranks of skilled and educated professionals across industries. We are making an impact in business and politics, where the first Latina U.S. Senator, Catherine Cortez-Masto (D-NV) was elected in 2016. Despite these gains, there is one significant place where Latina women have not made progress: closing the wage gap. Compared with white men, Latina women earn just 54 cents on the dollar. In fact, the reason we celebrate Latina Equal Pay Day on Nov. 2, 2017, is because it takes that long for Latina women to make the same amount of money that non-Hispanic white men made — in 2016.

The median salary for a Latina woman in the US is $31,109 a year, while their non-Hispanic, white male counterparts make $57,204 — $26,095 more per year. This means Latinas make about 54 cents for every dollar a white man makes. Compare this to non-Hispanic white women who make about 80 cents on the dollar compared to their male counterparts, and Latino men who earn about 69 cents on the dollar — down from 71 cents in 1980, according to the Pew Center. If this gap were closed, the average Latina woman in America could buy a car, pay for a year at a public university, or even cover their rent for a year and still have money left over for food without the added stress of being paid an unfair wage.

Women employed in low-paid jobs suffer the widest pay gap, but women working in high skilled positions are also vulnerable. For example, according to a fact sheet published by the Labor Council for Latin American Advancement (LCLAA) and National Women’s Law Center (NWLC), “Latinas working as physicians and surgeons — a high-wage job where Latinas make up less than 1 percent of the workforce — make just 48 cents for every dollar paid to their white, non-Hispanic male counterparts.”

As Bustle pointed out on Black Women’s Equal Pay Day, equal pay is about more than just gender — it’s about race, too. For Latina women across the country, their immigration status, language barriers, discrimination, and harassment are all contributing factors to receiving unfair pay.

As bleak as these stats seem, there exists a sure-fire way for Latina women to earn the better wages they deserve: joining a union in their industry. Latina women who have joined a union earn more than their non-union counterparts — $242 more per week, in fact, according to the Bureau of Labor Statistics.

For decades, the labor movement, constituency groups, women’s organizations and other allies have been fighting for just and safe working conditions for hard-working families. Many of these folks are Latina women who are constantly finding new and innovative ways to bring people together and drive them to action.

The magnitude of this problem and the impact on the lives of Latinx people and their families is one that requires decisive and collective organizing. Unions, like my own, the United Food and Commercial Workers International Union, must continue to organize Latinx workers and vigorously fight for equality in the workplace. Civil society organizations, philanthropy, business, and the government must also work with labor and workers’ rights organizations to address this problem. We have a responsibility to support and uplift everyone — it’s the only way to build a better future that we can all be proud of.

On Nov. 2, 2017, the day that Latina workers finally catch up to what white male workers were paid in 2016, individuals and organizations will join in solidarity for a day of action to raise awareness about this problem. Latina women will share stories about how the pay gap impacts them, folks will visit and call their elected officials to say that we can’t afford to wait for equal pay, and of course you can follow along on Twitter via the #LatinaEqualPay hashtag to collect more resources and tools to get informed, join the conversation, and take action to close the pay gap.

It’s important to remember that everyone has the power to help and do good. During the 2016 election, it was our sisters in the Domestic Workers Alliance at UNITE HERE Culinary Union 226 in Las Vegas, led by now-Nevada State Senator Yvanna Cancela, who decided to say, “ya no más!” and showed fellow Latina women just how powerful each and every one of them could be. They organized rallies, they registered folks to vote, and of course, they build a wall of taco trucks. Their example showed the world how invaluable Latina women’s voices are when building a better economy that works for all of us.

These trabajadoras’ passion and determination inspires me to keep doing this work each and every day. But their energy reminds me to say to you all, you, too have the power to help close the pay gap. Find your Local Union family, learn more about organizing, support Latina leaders fighting for equal pay, and continue the march forward.