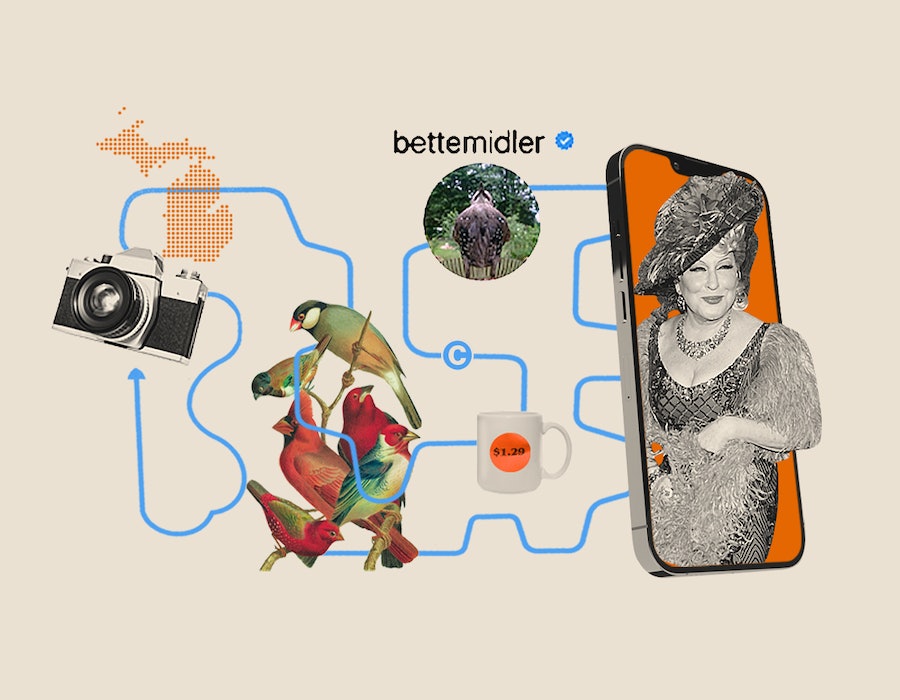 In April 2021, the photographer who goes by the name Ostdrossel received a Twitter notification that one of her followers had tagged her in a comment. The fan had noticed that Bette Midler — actor, comedian, noted mandarin duck enthusiast — had tweeted one of Ostdrossel’s photos, of an oriole perched on an orange slice, without crediting her. Soon, a few other followers alerted the photographer, who tweeted a response: “Oh my, I am honored to get tweeted by you, @BetteMidler … You can find many more bird photos and videos on my pages and ostdrossel.com. Here’s to the beauty of nature. Have a fabulous weekend!”

Midler didn’t respond and, roughly a month later, changed her Twitter avatar to another one of Ostdrossel’s bird photographs: this time, a starling with its chest puffed out, wings tucked behind its body. And then she changed her Instagram avatar to the starling, too. It wasn’t the first time someone had used one of her photos without permission, but Midler was certainly the highest-profile person who had. (A spokesperson for Midler did not respond to Bustle’s request for comment. Midler, who has faced other online hubbub recently, removed the starling from Instagram in the last week.)

“People just take [the photos] and don’t care where they come from,” says Ostdrossel, who goes by the mononym professionally. “They just repost it because it’s a ‘viral post.’” She says one company added her images to its Amazon product page. “They pretended their camera took photos that I took,” she says. “I’d never even heard of that camera.” And recently she noticed “somebody using several of my photos for his own portfolio.”

When she finds her photos elsewhere on the web, she leaves a comment with her information, and her followers do the same. If a photo is being used for commercial purposes, she reaches out to ask for explicit credit. Sometimes the offenders “feel attacked,” she says, “which is kind of funny because they apparently did not feel like they were doing something similar to me when they took my photos.”

Although she has no hard feelings for Midler — and says she’s “a little bit” flattered the actor used her photos — “it would be even better if [she] wrote, ‘photo by @Ostdrossel.’ Why is that so hard?”

Ostdrossel, 44, moved to Michigan from Germany about a decade ago. She noticed that birds were generally more “vibrant” stateside and wanted to share photos with her mother, who lives in Germany. So she set up a feeder in her backyard, where she photographed the species that visited, like house finches, goldfinches, and blue jays. The eastern bluebird was her favorite, and the inspiration for the name “Ostdrossel.” When trying to describe the eastern bluebird to her mother, who doesn’t speak English, an automated translation software mistakenly created the word. “I thought it was interesting, being a translator myself,” says the photographer, who writes German subtitles for American films on Netflix and other streaming platforms as her day job. “Machine translation is not always perfect.” (The correct German name of the bird is Rotkehl-Hüttensänger, or red-throated cavesinger.)

To create the photos, she’s rigged an elaborate setup near her feeder, featuring a box with a macro lens and an action camera with a motion sensor. “It’s just a different kind of thing when you suddenly see all the textures and the eyes in detail,” Ostdrossel says. She currently switches between two live stream locations: one at the feeder and one inside a “nest box” where the local bird moms “lay eggs and raise their babies,” she says. “I have a camera in there that sees it all.”

When a local birdwatching group responded “very enthusiastically” to the candid shots, she decided to start a Tumblr to share the photos with a larger audience. Then, in 2016, her first images went viral on Tumblr — photos of the cardinal, grackle, mourning dove, blue jay, and tufted titmouse — and she decided to migrate her content to its own website.

Ostdrossel doesn’t routinely search the web for her images. “That would probably make me very angry, because they appear all over the place,” she says. “My followers sometimes send me a link or they say, ‘You might want to look into that,’ or ‘There’s somebody using this.’” And she knows right away when one of her birds appears where it shouldn’t. “My photos are like my babies. I know the little details, and I know basically every photo that I have posted.”

Per the U.S. Copyright Office, copyright exists “from the moment the work is created,” but ultimately, there’s not much Ostdrossel can do to defend herself from copyright infringement. She’s not in a position financially to hire a lawyer, she says, or send a cease-and-desist letter every time someone uses an image without crediting her. “All you have is the court of public opinion,” she says. “Part of why I decided to be very present on all the social media platforms was also to fight against people taking my photos.”

In 2019, she created a company in order to sell stickers on Redbubble, but she has not monetized beyond that online marketplace, where right now she’s raising money for humanitarian efforts in the wake of the Kentucky flood. In 2020, she raised more than $1,000 for Feeding America by selling cloth masks printed with the birds. But outside of fundraisers, her merch is not exactly lucrative.

More like this
Marcus Mumford, Open Book
By Ilana Kaplan
A Couple Of Pints With Brooklyn Beckham
By Mickey Rapkin
Kim Kardashian On The Beauty Hack That “Changed My Life, My Skin, My Confidence”
By Taylor Jean Stephan
The Indigo Girls Taught Me Queer Relationships Could Be Messy, Too
By Hannah Soyer
Get Even More From Bustle — Sign Up For The Newsletter