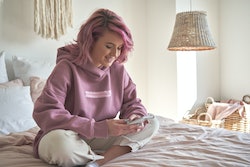 If you're looking for a quick way to end a friendship, Gen Z has the solution you seek. The latest TikTok trend has people introducing their friends by their least appealing qualities and passing the phone to said friend to berate them equally. Basically, TikTok's #PassThePhone challenge is taking over our For You Pages and friendships alike.

The concept is simple. You record a clip of yourself saying "I'm going to pass the phone to the person who [insert unsavory thing here]." It can be rude! It can be raunchy! It can a straightforward-ish way to say, "I think the way you are is bad, but I love you regardless."

The key is that the person you're passing the phone to doesn't hear what you say about them. Then, they presumably repeat the process: record a clip of themself saying they're going to pass their phone to the person who is the biggest simp. Or the person who is still making whipped coffee a year after the trend has died. Or the person who had to Google what "simp" even means. And surprise! Those can all be about the same person!

That's it. That's the whole thing. Please enjoy these friends exposing each other.

It's similar to the "who's going to be the drunkest" trend where you each film a confessional-style clip saying who you think is going to get the drunkest at the party. These are best done with theme parties so you can see the drunkest White Claw and the drunkest Mike. It's also reminiscent of the "it's the [passive aggressive commentary on someone else for me" challenge where you exchange digs with another person on camera, going back and forth until the time runs out or you are too destroyed to continue. Unlike the #passthephone challenge, you get to hear the commentary in real time. Is that better? Worse? Equally devastating in a different way?

Even if you’re practicing social distancing and don’t have a group of friends to pass the phone to, you can still partake in the #passthephone challenge. Just pass the phone to yourself! After all, who knows you better than you.