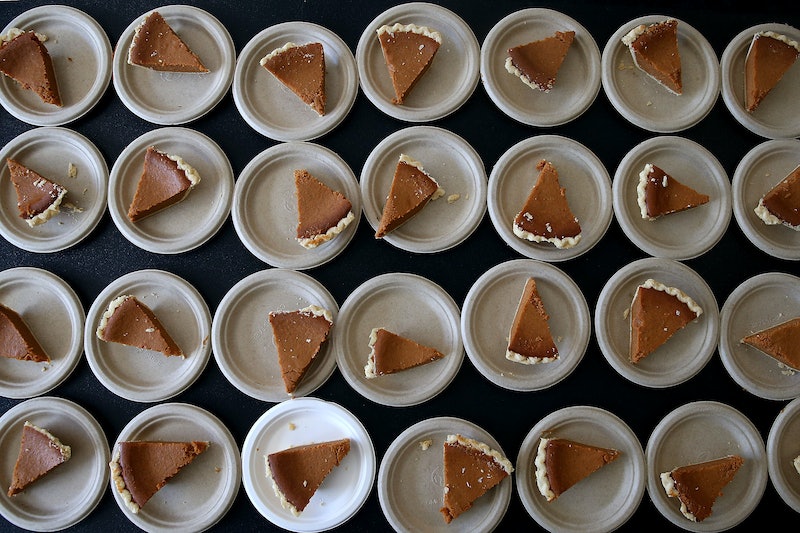 If you're a math wiz, or just a person on the internet, you know that March 14, is a very special day. For those of you who don't know, however, it’s Pi Day, a day that celebrates the mathematical constant of 3.14. Pi is the ratio of a circle's circumference (distance all the way around) to its diameter (distance from side to side) — and it's a constant number because it remains the same in any circle of any size. This is because while circles can obviously vary in size, they don't vary in shape.

For any circle, dividing its circumference by its diameter, will give you the same number: 3.14159..., which is what we call Pi. Because we like to round numbers, though, Pi is most commonly referred to as 3.14, which looks a lot like March 14, hence its celebratory origins. These celebrations go all the way back to 1988, when physicist Larry Shaw founded the "holiday." So a big thanks to him for giving us an excuse to flex our math skills and maybe eat some actual edible pie every March.

Of course, to celebrate many people eat pies because the homophones make for an easy reason to fill up on the baked good. And while the two word just sound the same and have no actual relation to each other — even though pies are round — observers of the holiday are happy to appoint the sweet as a celebration must-have. But perhaps the best part of Pi day are not the pies, it's the memes that surface online right around March 14. Because math can be funny, especially if the internet gets to it and there’s no actual math involved.

Being yelled at by our full name is something we can all relate to, no?

Honestly, if there was actual pie in math class it would have been much easier to focus.

This is definitely just a coincidence, but it’s a fun one at that.

When worlds collide, this is what we get.

Never ending pie doesn’t sound like the worst problem to have.

When your math knowledge and history trivia come together as... pi.

Okay, fine, this one requires a little bit of math know how.

When you see the mustache you’ll get the point.

Someone needs to pitch this plot to Hollywood as soon as possible.

This last one gets a bit meta. This mother texted her teenager some math jokes like “What do baby parabolas drink? Quadratic formula!” and then asked her if she enjoyed her pi day jokes. Her kid’s response could not have been more on point: “They never end.”

More like this
21 Galentine’s Day Memes To Celebrate Your Best Friends
By Meghan Bassett and Mia Mercado
Dunkin’s Valentine’s Day Lineup Includes A Drink That Tastes Like Dessert
By Alexis Morillo
15 Black-Owned Liquor & Wine Brands To Add To Your Bar Cart
By Alexis Morillo
12 Aphrodisiac Desserts To Spice Up Your Valentine’s Day
By Kaitlyn Wylde
Get Even More From Bustle — Sign Up For The Newsletter
From hair trends to relationship advice, our daily newsletter has everything you need to sound like a person who’s on TikTok, even if you aren’t.

This article was originally published on March 13, 2017