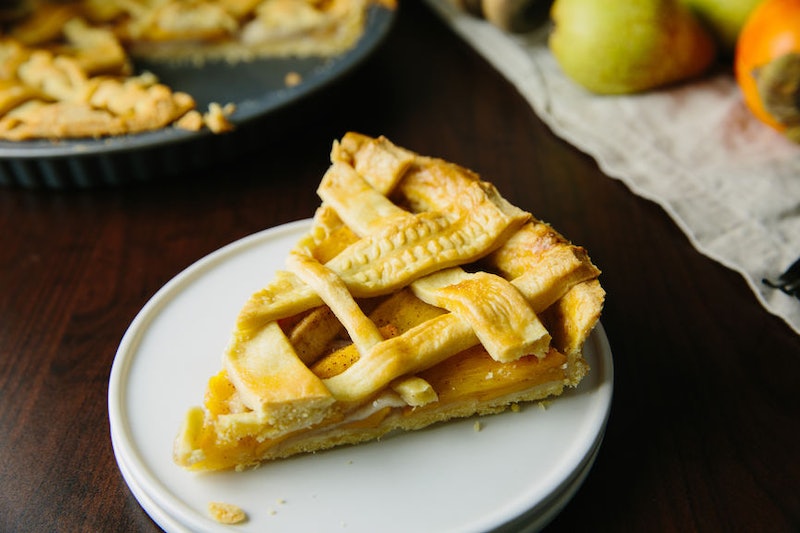 Have you noticed a lot of puns and pies being served up today, often in tandem? Of course you have — it's National Pi Day, the one calendar day of the year that appeals to both math nerds and food geeks alike. But, if you woke up this morning assuming that today was just another Monday, and didn't expect to be bombarded with geometry jokes at every turn, you might very well be wondering: what is Pi Day, and when is it going to be over? Relax. Even if you don't care a single ounce about irrational numbers, I'm willing to bet that you do care about pie — so grab a slice, and then let's chat about why this holiday is way more exciting than you think.

You don't have to be a math genius to figure out why National Pi Day is celebrated on March 14. The calendar day 3/14 just so happens to include the first three significant digits of Pi — or, the ratio of a circle's circumference to its diameter. Generally speaking, fans of both Pi and pie use this opportunity to bring the world's attention to what it is that they love the most, whether that's dessert or digits. Either way, the holiday is a fun opportunity for everybody to brush up on their middle school geometry notes, while trying to solve the hardest question of them all: apple, or cherry? Here are seven facts about National Pi Day you didn't know.

1. Pi is an infinite and irrational number

That's right, there's no end in sight. That being said, we have been able to calculate more than a trillion of Pi's digits — but there's way more where that came from.

2. Although Pi has been around forever, National Pi Day is fairly new

It was first established in 1988 by physicist Larry Shaw. Pi Day as a holiday is only 28 years old.

In 2009, Congress passed a non-binding resolution to make March 14 permanently Pi Day. One of the reasons cited for passing National Pi Day was the need to "reinforce mathematics and science education for all students in order to better prepare our children for the future." So, take this opportunity to teach someone something today.

It's on July 22, or 7/22. Why? Flip the order of those numbers around, and you have 22/7, which just so happens to be the fraction equivalent of Pi. Mind blown.

5. You should absolutely celebrate with pie

These aren't my instructions (although I am strongly in agreement). These orders come from the American Pie Council, which actually takes Pi Day pretty seriously. Check out its website for celebration ideas, pie recipes, and even a brief history of pie. You're going to want some dessert to help wash down all that math, after all.

But for now, let's focus on what's important... pie.