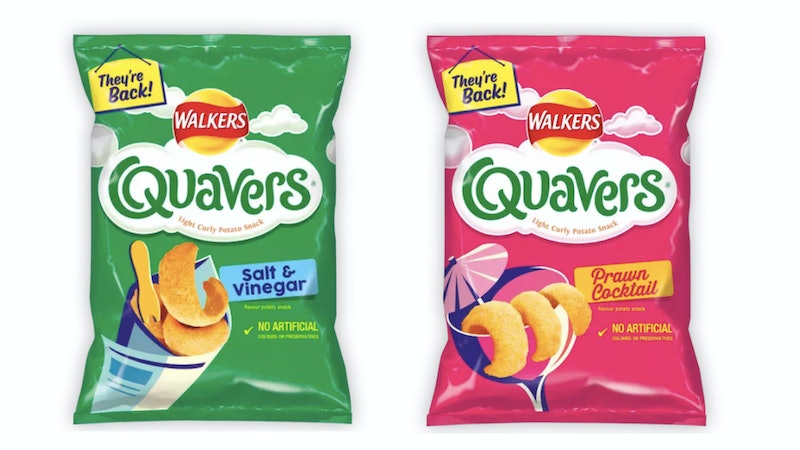 January hasn’t exactly been a month of good news. But fear not, as I've got some foodie news for you that'll start your year right and pep you up for 2021. Prawn cocktail Quavers are returning, my friends, along with a salt and vinegar flavour too.

It was first announced in December 2020 that these top tier crisp offerings would be set to drop in stores from January 2021. And the good news is that after what feels like months (doesn’t time drag these days?!), they’ve finally arrived!

Millennials may remember the two flavours were around back in the '90s, then disappeared in 2012, much to our dismay.

But they're back with a bang, confirmed Walkers' Will Robinson in December. "We know how much Quavers mean to the nation and there's no denying the love for the retro flavours having been inundated with requests and petitions to bring them back over the years," he commented.

"So, we've finally given the nation what it wants with both Prawn Cocktail and Salt & Vinegar hitting the shelves early next year."

In December, the brand even ran a competition on Twitter for one lucky winner to get a life-time supply of these delicious goodies. Sadly it’s closed now, but you can get your hands on the crisps in all major supermarkets.

Walkers have confirmed to me that both flavours will go on sale from today, Jan. 15, and will be available at selected Tesco, Morrisons, Asda, and Co-op stores, as well as online and in independent convenience stores.

I’ll race you to the checkouts...