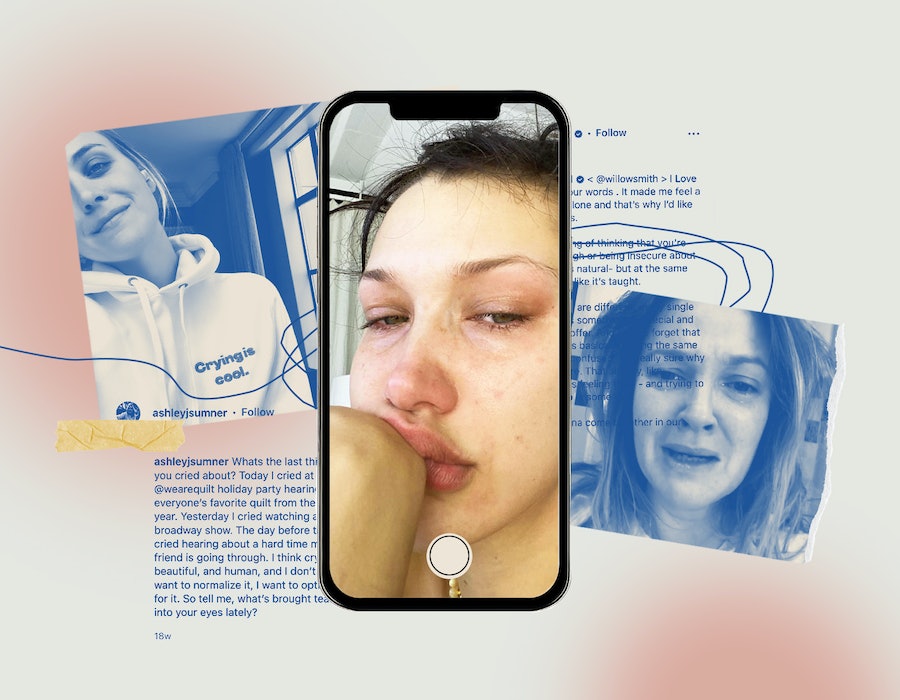 In 2019, I did something I’d never done before. I took a selfie, red-faced and tear-stricken, and posted it on social media. This was long before Bella Hadid shared an entire photo dump of herself crying on main, but I was at home in Los Angeles and had just seen a news notification about a wildfire sweeping across Northern California. And as I scrolled through images of rural neighborhoods that looked like the one I’d been raised in burning down, I started to cry alone on my bedroom floor. Then I had the thought that other people were also hearing about this news, and were probably also alone. So I took my crying, filter-less face and I posted it on Instagram.

At 33 years old, crying isn’t unusual for me. I’ll cry from joy, sadness, or just because someone else is crying and I can’t help but cry too. But I haven’t always been this way. I used to keep my feelings confined to my journal, until a conversation with my therapist a few years ago shifted my perspective. I was sitting in her zen Santa Monica office telling her about a lunch meeting I’d had with a potential investor at the Brentwood Country Mart. I’d thought it was going well, until he asked me a simple question I wasn’t prepared for. Suddenly, I felt his energy shift from intrigue to judgment. We shook hands, he walked towards the door, and I b-lined to the bathroom, walking fast enough to make sure no one saw the tears that were five seconds away from streaming down my face. I sat down in the cozy, candle-lit stall, cradled my head in my hands, and allowed myself a moment to quietly cry before cleaning up my mascara and pulling it together.

When I finished telling this story, I locked eyes with my therapist, ready for her empathy. But instead she asked:

“Do you usually find a place to hide before expressing your feelings?”

I felt shocked, and began cataloging all the places I’d found to hide before allowing myself to cry. My bedroom in my family home, bathroom stalls at work or on dates at nice restaurants in New York City, stairwells of buildings I was interviewing in, and yes, numerous cars and closets. Even my therapist had never seen me cry.

Until then, I’d thought of myself as pretty open compared to most people born in my generation. I did therapy, journaled, and meditated. So realizing I’d been resisting some of my most difficult feelings was a shock, but it also spurred me to change. I began sharing my feelings with people I felt safest with. First up was my best friend from summer theater camp, Sophie, who had been encouraging me to feel all along. While her support was a salve, continuing to open up to others was hard (understatement). But ultimately I learned that when you open up to people, they open up in turn. You begin to share the secret, more vulnerable battles: like how you felt belittled when a colleague spoke over you, or how your partner’s demanding job has left you feeling emotionally unsupported. The science behind this is very real. According to research from U.C.L.A., speaking your feelings aloud, a process called “affect labeling,” can significantly reduce stress. But most of all it will help you build a community of people who you love and who love you back. And eventually, as time passes, you begin to feel better.

Speaking your feelings aloud, a process called “affect labeling,” can significantly reduce stress. But most of all it will help you build a community of people who you love and who love you back.

When I posted that first selfie in 2019, I was shocked by the number of private messages I received. People worried that I wasn’t well, that this was a cry for help. They wrote things like, “Are you ok? Your post is pretty dark.” "Maybe you need to talk to someone." "Wildfires are pretty common in California." They thought this “flagrant” display of sadness meant I was emotionally unstable, rather than a healthy moment of openness that could lead to the healing that I knew I wanted and deserved.

I wish I could tell you that I kept the photo up. I didn’t. Within three hours, I took it down and retreated to my “IRL” friends that I felt safe with. I decided that there was an unspoken and agreed upon spectrum of acceptable emotional expression to be displayed in public, and anything beyond that would lead to judgment and the feeling of social isolation. I grew angry that the very technology that was supposed to “connect us” was actually doing the exact opposite.

When the pandemic hit — and my social media consumption grew from 15 minutes a day to 3 hours — I decided to do something about it. I started imagining what it would be like for us to have a social space that would offer real opportunities to share all of ourselves in. A space that would shift us from repetitive, surface interactions to developing real friendships. I took those hours wasted doom-scrolling and within a matter of weeks, I had reimagined my company, Quilt — which was initially conceived as a platform for people to open their homes and spaces to host intimate conversations — to be fully online. Turning it into an app where unvarnished displays of emotions were the norm, not the exception.

From the moment we launched, crying on Quilt has been a celebrated part of our culture. I remember three months in, when a host on the platform was pulling tarot cards for a group of fellow Quilters. When it got to her own reading, she began crying and then apologizing. Within minutes, a college student, who had long been bullied on social media, shared the first time she cried on Quilt: it was when she realized this was actually a kind digital space. Then another Quilter shared that she’d first cried on the app when talking about losing her mother. Then another Quilter jumped in with a story, then another. It was in this moment where I realized crying on Quilt wasn’t just normal, it was cool. So we made some “Crying is Cool” hats and sweatshirts (and evolvetogether tissues!) and gifted them to our community. And before I knew it, I found myself posting my crying selfies again. But this time, people weren’t wondering what might be wrong with me — they wanted to share their own stories with me.

More like this
How To Use The Crying Filter On Snapchat, TikTok, Instagram & More
By Emma Carey
What Is “Night Luxe?” Breaking Down TikTok’s New Aesthetic
By Courtney Young
The Case For A Hard Launch Summer
By Morgan Sullivan
TikTok Is Using A ‘Love Island’ Sound To Expose Their Weird Crushes
By Courtney Young
Get Even More From Bustle — Sign Up For The Newsletter