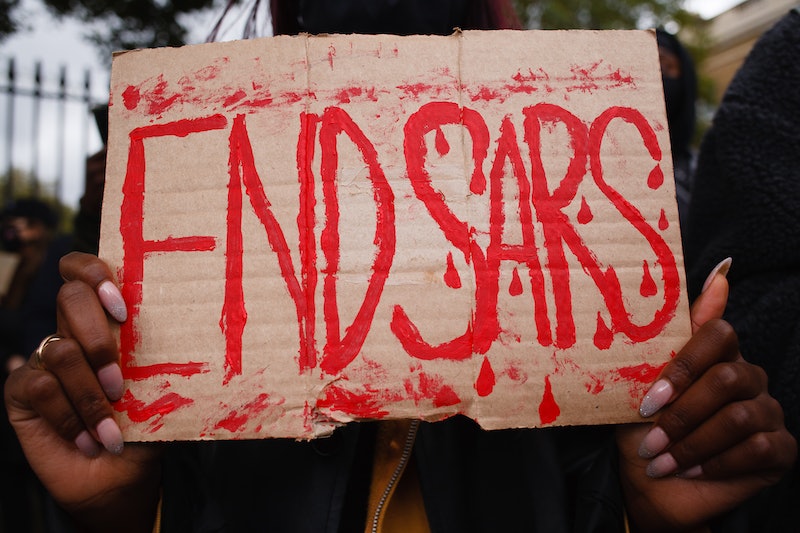 The past year has seen a significant rise in global demonstrations against police brutality. Following recent protests in Nigeria, the #EndSARS social media campaign has grown exponentially online, with supporters demanding the controversial SARS police unit be held accountable for the brutal mistreatment of Nigerian citizens. Major protests continue to take place across Nigeria and beyond, with influential figures such as John Boyega and Rihanna voicing their support. Below you can find all you need to know about the recent demonstrations, as well as suggestions of how you can help the SARS protesters in Nigeria.

Nigeria’s Special Anti-Robbery Squad, commonly referred to as SARS, was founded in 1992 to help tackle violent crime including robbery and kidnapping. As Sky News reports, the unit has been hit with accusations of mistreating Nigerian citizens and increasing abuses of power in the decades following its conception — which human rights groups claim has worsened in recent years.

Per the New York Times, SARS operated as a "faceless, 15-member team that travelled in two unmarked buses, it's officers wearing neither uniforms nor name tags." The unit became notorious for targeting seemingly well-dressed young people, and are known to have stolen from, tortured, and even killed those who tried to resist them.

Human rights organisations like Amnesty International have documented allegations relating to SARS since the 1990s, and earlier this year, the group highlighted at least 82 cases of extortion, torture and ill treatment by SARS between January 2017 and May 2020.

Why Are There SARS Protests In Nigeria?

Although first launched in 2017, the online #EndSARS campaign gained international attention following reports that a young man had been killed in southern Nigeria during a stop-and-search on Oct. 3. Nigerian police denied SARS officers had any involvement, but his death sparked mass protests across the country and supportive demonstrations in countries around the world.

The protests appeared to have had some success when President Muhammadu Buhari announced SARS had "been dissolved with immediate effect" on Sunday, Oct. 11. However, the announcement was met with scepticism by many after it emerged SARS officers would be redeployed to other areas of the police force, while others said the measures do not go far enough. “The announcement falls short of demands for accountability and justice for abuses committed by the unit and police in general," Amnesty International’s Osai Ojigho said in a statement.

Protests continued with many activists calling for further police and government. As Sky News reports, authorities in the city of Abuja have requested an end to all protests, and Nigeria's military vowed to "maintain law and order, and deal with any situation decisively." Regions including Lagos are also planning to impose temporary curfews in an attempt to disband protests, the BBC reports.

What Happened On October 20 At Lekki Toll Gate?

Sky News reports that Nigerian police opened fire on protestors at a rally against police brutality in Lekki, a suburb of the capital Lagos on October 20. Per the BBC, an as-yet undetermined number of people were reportedly shot dead or injured. In a statement, Amnesty International Nigeria said it had "received credible but disturbing evidence of excessive use of force occasioning deaths of protesters at Lekki toll gate in Lagos."

It continued: "While we continue to investigate the killings, Amnesty International wishes to remind the authorities that under international law, security forces may only resort to the use of lethal force when strictly unavoidable to protect against imminent threat of death or serious injury."

Lagos state governor Babajide Sanwo-Olu claimed in a statement on Twitter that "forces beyond our direct control" had caused violence against protestors and confirmed he had been visiting "victims of an unfortunate shooting incident" in hospitals.

He wrote: "This is the toughest night of our lives as forces beyond our direct control have moved to make dark notes in our history, but we will face it and come out stronger. I've just concluded visits to hospitals with victims of this unfortunate shooting incident at Lekki."

Adding: "As the Governor of our state, I recognize the buck stops at my table and I will work with the FG to get to the root of this unfortunate incident and stabilise all security operations to protect the lives of our residents. I will give a state broadcast in the morning."

How You Can Help From The UK

Campaign groups such as EndSARS UK aim to amplify the voices of the Nigerian youth against police brutality with UK-based protests. A protest against the shooting and reported killings at the Lekki toll gate is taking place at the Nigeria High Commission in London at 3 p.m. on October 21. Details of future demonstrations can be found on the campaign's social media channels.

Supporters in the UK can also sign a petition which demands the UK Government implement sanctions against the Nigerian Government and officials — and send an email via Amnesty International to President Muhammadu Buhari and Attorney General Abubakar Malami demanding police reform in Nigeria.

Elsewhere, you can find fundraising links and donate to initiatives which aim to help protestors in Nigeria on the EndSARS resource hub. The Nigeria Feminist Coalition, a group at the forefront of the peaceful protests, is taking BitCoin donations here. Per British writer and activist Tanya Compass, those in the UK can use CoinBase to send BitCoin donations.