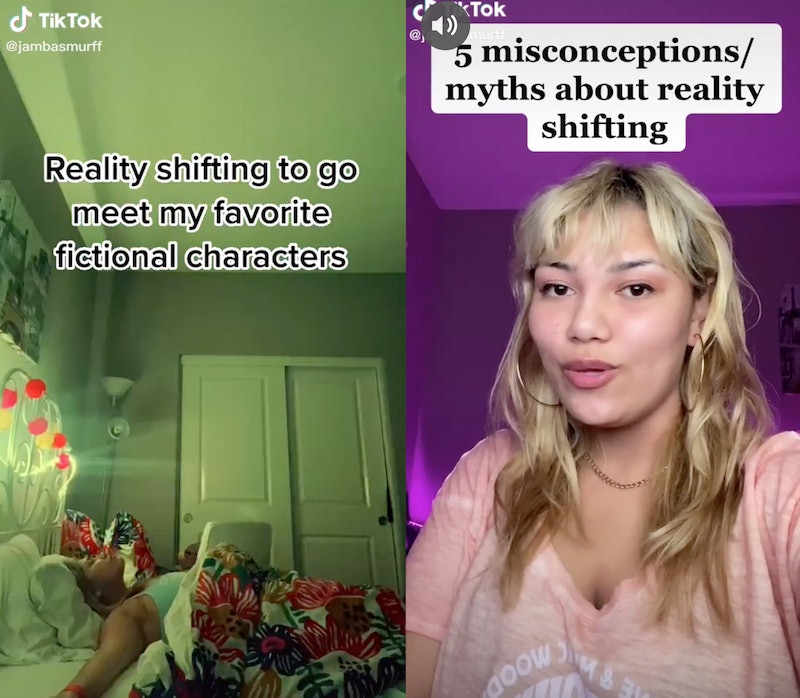 Alt TikTokers love indulging in a good trippy science fiction theory. (Remember this summer's Randonautica craze?) After nearly a year in quarantine, no theory is more appealing than an alternate reality. Enter shifting, where TikTokers claim to have "shifted" into other dimensions or parallel universes, where they live out better versions of their current lives, enriched by romances with fictional characters — or at least less homework. After first finding an enthusiastic community on Reddit, practitioners have taken to TikTok to report back from their travels and give pointers to shifting hopefuls. Videos with the hashtag have over 2.5 billion views on the app.

"I first found out about reality shifting through YouTube, before I saw it over my For You Page on TikTok,” Jade, who posts videos on TikTok about her experiences, tells Bustle. She understands shifting as the practice of building a new reality in your subconscious mind that you travel to in a sleep-like state — kind of like meditation, astral projection, or lucid dreaming, but different.

While this trend might sound like the kind of thing that makes you feel very out of touch with Gen Z, reality shifting theories are not new. Mystic author Neville Lancelot Goddard published various works in the 1940s and 1950s about the topic, and his teachings live on in a Reddit community with over 50,000 members.

Not everyone agrees on how to shift. Katy, an aspiring universe-traveler, uses meditation and lucid dreaming techniques. "I've had some dreams that feel very real, but the difference between that and reality shifting is that the latter is more lucid, where you have the freedom to explore and do what you want while also being in a different universe," she explains. "Your body stays in the same place, but your consciousness goes somewhere else entirely," she adds.

If this just sounds like AP imagination to you, know that shifters on TikTok believe that they are traveling to another dimension, at least mentally. “Everyday you’re creating multiple parallel universes,” Jade tells Bustle. “For example, if you think of drinking water or lemonade and you choose water, a parallel universe is created for an instance where you drank lemonade,” she says. That’s part of what makes the videos so entertaining to watch: shifters are so enthusiastic about their sci-fi hobby, you can almost be convinced that you have a clone walking around in another dimension drinking lemonade, getting stains on your favorite shirt, and dating a Weasley.

If you're over this week and curious about shifting into a better one, TikTokers suggest starting off with intentions. Manifest your desired reality by writing out the details that are important to you, like who you are in this world, and who is there, and what you are doing, a process called scripting. The more details the better, as you will need to envision this world in order to travel to it. "Scripting really helps to bring the world to life," Urata, another shifter, tells Bustle.

Once you have a plan for where you want to go, it's time to actually try to shift. There are many different shifting methods, but one of the most popular is the starfish technique. When your world is complete on paper, get into bed in a starfish position and count to 100, focusing on where you want to go after each number. To enhance your chances of getting to that focused, sleepy state, Urata suggests playing calming music, turning off the lights, wearing comfortable clothes, and hyping yourself up to believe it will work, "because you won't be able to shift if you don't truly believe you have the power to," she says.

Shifters agree that achieving this "state" is hard, and takes practice and focus. Urata, who is in a shifters group chat, says it's important to connect with other shifters to share tips and tricks and notes on experiences to improve your technique.

The point of mind travel is, according to Jade, “to better understand yourself not only as a person but your goals and your limits.” That, or, according to much of TikTok, to sip on some Butterbeer with your favorite fictional wizards.