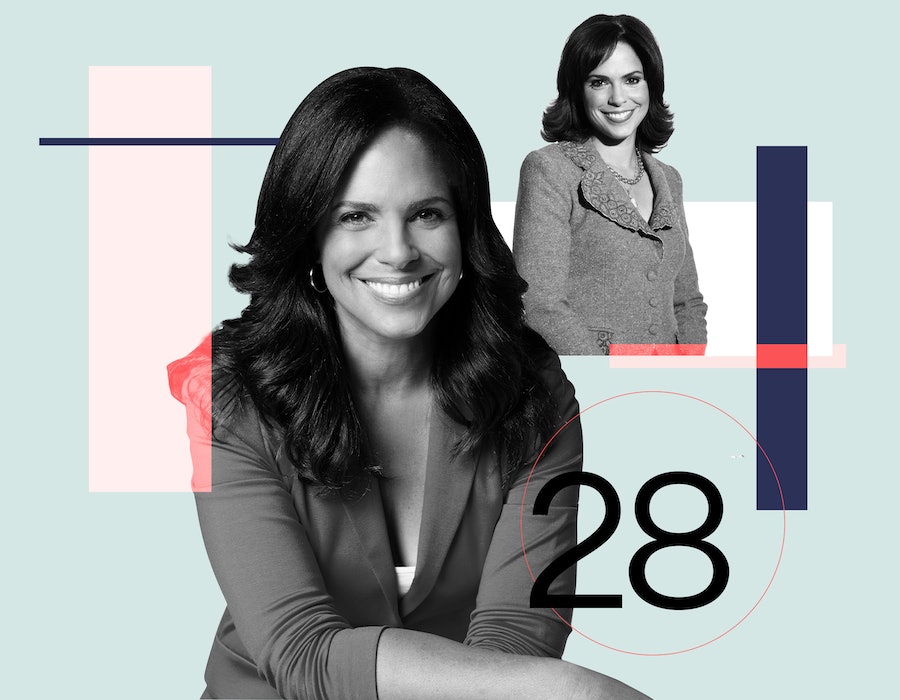 In Bustle’s Q&A series 28, successful women describe exactly what their lives looked like when they were 28 — what they wore, where they worked, what stressed them out most, and what, if anything, they would do differently. This time, Soledad O'Brien reflects on what it was like being a young reporter living in San Francisco at 28.

Today, you can find veteran journalist Soledad O'Brien running her own production company; hosting Matter of Fact, a talk show tackling issues surrounding race, equality, and justice; and even taking her peers to task via Twitter, where she has more than a million followers. Recently, she pitched a scripted series based on her experiences as a news anchor and launched a news podcast titled Very Opinionated.

But at 28, O'Brien was an entry-level reporter who felt stuck doing D-block stories — lighthearted stories that often appear in the final minutes of a half-hour show. "A-block stories at that time were frequently war and breaking news," says O'Brien, host and producer of the Black in America documentary series. "No matter how nice your D-block story is, it's in the D block, which doesn't matter to people making decisions about who moves ahead. You had to fight to do A-block stories if you wanted people to take you seriously."

Below, O'Brien, now 54, discusses working two television gigs, dealing with rejection, and why she wouldn't do anything differently.

At 28, you were working at KRON-TV as a local reporter covering Oakland and East Bay and co-hosting Discovery’s The Know Zone, a science and technology show that appealed to a younger audience. How were you feeling about your career?

SO: I started co-hosting The Know Zone because I was the lowest paid reporter at the station. I was paying $600 a month for a junior one-bedroom apartment in San Francisco. The only way I could pay my rent and eat was to supplement my income. The Know Zone paid $1,300 or $1,500 per episode and there were about 10 episodes, so it increased my salary by about 40%.

The Know Zone opened so many doors for me because I learned about storytelling from another perspective. One of the producers helped me learn how to tell stories with my voice and my pacing. She'd say, "Go bigger, go smaller." Every step in your career can be valuable, even the ones that don't necessarily feel important at the time.

Did you have a five-year plan?

SO: I'm not a go-with-the-flow kind of person, so I absolutely had a five-year plan, 10-year plan, 30-year plan. I need a lot of structure, so I make a list when I wake up. Before going to bed, I make another list, then I review my list the next morning and add to it. But at 28, I was a little more flexible and could easily move onto the next plan when sh*t went wrong.

"Back then, I thought what made someone a good friend was that they're fun to hang out with, but I realized it's the person who'd come with you to see your mom in the hospital."

How did you handle rejection in your 20s?

SO: My late mother, [Estela], used to say, “You have 24 hours to wail and cry, sit in bed, eat ice cream, but after 24 hours, you need to start making a list of next steps.” So I would give myself a full day to cry and sit in bed with a pint of Ben & Jerry's, but after 24 hours, I had a list going of, “Do I want to be at this station? What are the reasons to stay? What are the reasons to leave? What does the job I want look like?”

How did you define success back then?

SO: My parents took out loans and helped pay for me and my five siblings' college education, but the minute we graduated, that was it. For me, success was about paying my bills and getting better at my job because I was new and not very good yet. I constantly asked myself, “Am I heading in the right direction in terms of opportunity, in terms of ability, and in terms of pay?”

What was the boldest move you made that year?

SO: When I expressed that I wanted to learn how to anchor, one of the bosses said the station had a lot of women anchors and he wasn't interested. It was probably the first time in my life when I thought, "I shouldn't stay here." It wasn't like I had these grandiose visions — I just wanted to learn some basic skills to become more valuable. I liked working at KRON-TV, but that was the year I realized that I wouldn't stay there, and I ended up leaving soon after. If people don't see the vision that you see for yourself at a workplace, then you should think about going somewhere else.

At 54, do you feel like you're beginning to figure things out?

SO: No, but you know what does shift? Your values. Back then, I thought what made someone a good friend was that they're fun to hang out with, but I realized it's the person who'd come with you to see your mom in the hospital. I did figure out how to do my hair, and I did figure out who my voice was on television. Some big things you do figure out, but figuring it out? You do not figure it out.

Is there anything you would've done differently?

SO: I've never been a person who's like, "This sad, sorrowful thing happened to me 23 years ago, and I'm still mad about it." I just move onto the next thing. Terrible experiences help educate you. There’s not a single decision I made that didn't later prove to be valuable.

More like this
Iran Has Issued A Death Sentence Over Mahsa Amini Protests
By Catharina Cheung, Darshita Goyal and Maxine Harrison
10 Thanksgiving Alternatives You Can Celebrate This Month
By Katie Mitchell
At 28, Prue Leith Was In A Secret Affair & Sharing Apple Pie With Stoned Neighbors
By Grace Wehniainen
44 Impressive Secret Santa Gifts That Won't Break The Bank
By Sadie Trombetta and Lauren Grant
Get Even More From Bustle — Sign Up For The Newsletter