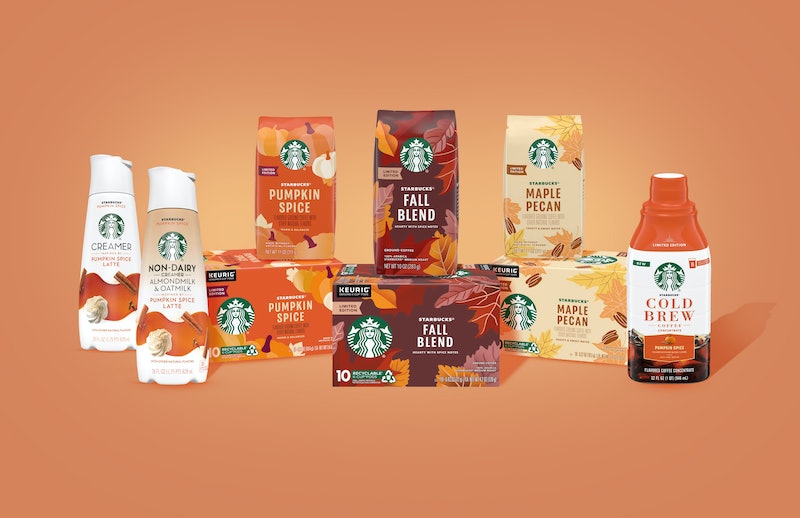 If you felt something, that was just the awakening of our collective autumnal spirit. As of this past week, Starbucks fall-themed grocery items are officially back in stores. Some are new goodies! Some are old favorites! All are the excuses you are looking for to start pumpkin spicing the heck out of yourself. But first, let’s start with the inevitable next question: When are Pumpkin Spice Lattes coming back to Starbucks? Unfortunately for us, Starbucks has not whispered anything about a return date... yet. Although, we are able to speculate around the time that the fan-favorite latte may appear back on the lineup. Based on past years, Starbucks has been releasing the seasonal beverage toward the end of August — and the earliest return date for the Pumpkin Spice Latte so far was August 25, 2020. Basically, this proved that if there’s anything that can outlast the pandemic, it’s our love for pumpkin spice.

The Maple Pecan coffee is a light roast, boasting notes of toasty pecan among slightly sweet maple. The new Pumpkin Spice Flavored Non-Dairy Creamer is... well, exactly what it sounds like. Combining pumpkin, cinnamon, nutmeg, as well as a rich blend of almond milk and oat milk, the creamer is non-dairy, so it’s great for anyone who needs an alternative. Don’t tell pumpkin spice, but Maple Pecan is a valid competitor for the title of Most Autumnal Flavor.

Another new addition, the Pumpkin Spice Cold Brew Concentrate, is the amazing cold brew you’ve come to know and love, bottled up for your at-home convenience. The rich flavors of pumpkin, cinnamon, and nutmeg perfect this concentrate.

Even if you aren’t a fan of coffee, you can still partake in the fall flavor festivities. In 2020, Starbucks launched new flavors of Teavana Tea Sachets: Mandarin Mimosa, Spiced Apple Cider, and Lemon Ginger Bliss. The Apple Cider tea combines flavors of apple, cinnamon, clove spices with South African rooibos for what is essentially autumn in a cup. If you’re more a fan of ginger and citrus, the Lemon Ginger Bliss is just that alongside subtle notes of strawberry. Last but not least, Mandarin Mimosa is inspired by “everyone’s favorite brunch cocktail,” per Starbucks, but that not’s all: This herbal blend features real mandarin orange peel, mango, and papaya. All three flavors can be found on Amazon.

As for Starbucks’ fall-themed lineup, it’s available in most major grocery stores, and you’ll definitely want to stock up. As per usual, these seasonal flavors will only stick around for a limited time.