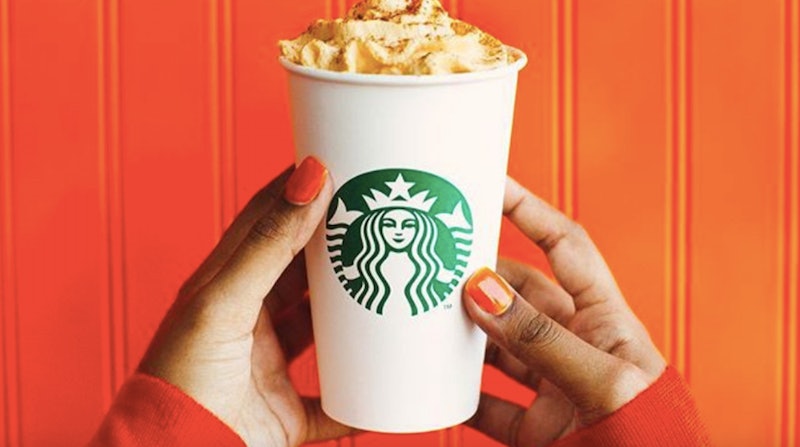 It's August, which means it's hot as heck. And also, it's August, which means a piping hot, fall-themed drink is about to make its grand return. Does that pairing make sense? Only in that people are so obsessed with Starbucks' Pumpkin Spice Lattes that they will pay for them when it's 90 degrees out. And when it comes to the 2019 Starbucks Pumpkin Spice Latte release date, that could be only a few weeks away.

Starbucks has not yet announced the official date of the PSL's return, but based on the release dates of the past several years, it's easy enough to guess around when that might be.

Last year, the PSL celebrated its 15th birthday and was released on Aug. 28. This was a comparatively early release compared to past years, but was not the earliest release ever. Last year, Business Insider published a handy chart of the Pumpkin Spice Latte release dates from the previous seven years, including the early release date and the official release date when the beverage was available in all stores. The release dates were as follows:

While the release date for the popular drink is still unknown, Starbucks has started rolling out some other Pumpkin Spice products in grocery stores. On Aug. 1, the brand announced the release of Pumpkin Spice Creamer, which will allow PSL fans to make their own pumpkin spicy coffee at home. The creamer also comes in three other flavors inspired by Starbucks drinks: Caramel Macchiato, Cinnamon Dolce Latte, and White Chocolate Mocha.

It won't be long now until the real deal Pumpkin Spice Latte is in Starbucks stores. Until then, eat some popsicles or something. Summer will be over before you know it.

More like this
Dunkin’s Pumpkin Spice Latte Is Officially Back This Week
By Mia Mercado
The 8 Best Chew Bones For Puppies, According To A Vet
By Andrea Hannah
Lotus Biscoff Does A Biscuit-Chocolate Hybrid Now
By El Hunt
The 6 Best Vacuum Seal Containers
By Cristina Sanza
Get Even More From Bustle — Sign Up For The Newsletter