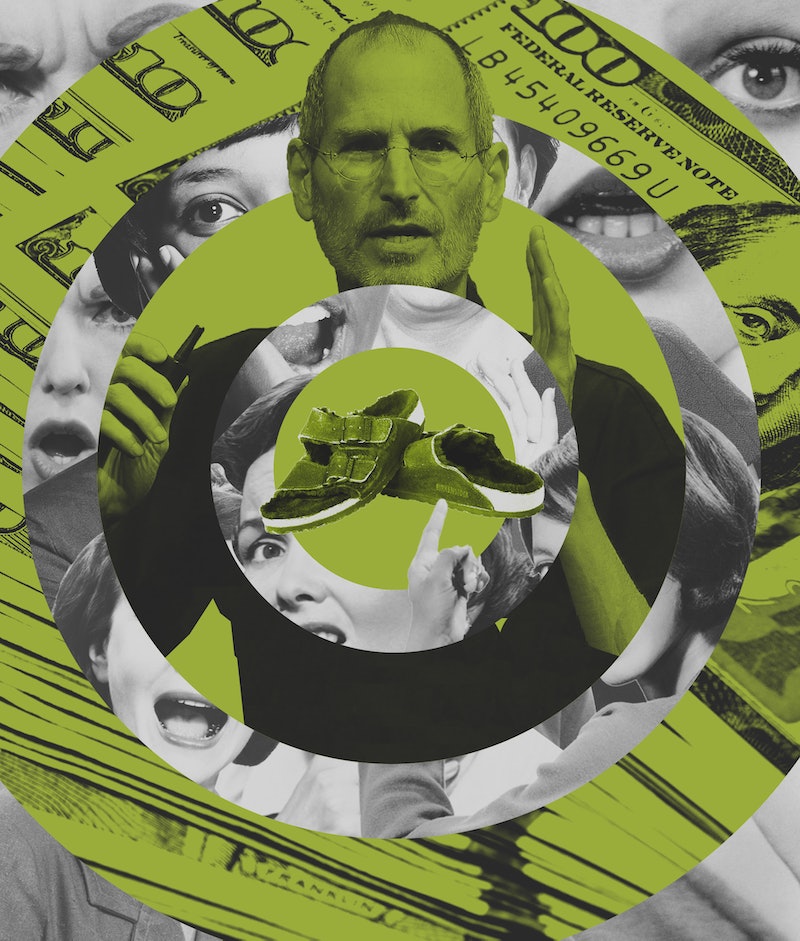 I saw recently that you purchased Steve Jobs’ old Birkenstocks, worn during the early days of Apple in the 1970s and 1980s, for $218,750. It was allegedly the highest price ever paid for a pair of sandals at auction, which is a sentence that — in my opinion — should not require quite so many qualifiers. I have quite a few questions for you.

Of course, I can’t reach you directly. You do not want your name disclosed. I completely understand. If I’d spent money this recklessly, I wouldn’t want my name disclosed, either. I didn’t even want my friends to know I spent $[redacted] on Jennifer Aniston’s favorite chemical peel. (My skin started to peel off my face, though, and I bore the aesthetic of a glazed doughnut — and not in a cute way.) You also may need to hide your identity to avoid someone breaking into your house and stealing them. I can’t imagine anyone but you would ever pay quite so much for these shoes; five years after his death, they were sold for a mere $2,000. I wouldn’t have thought crypto would ever look like a good investment, but you’re putting that theory to the test. They’re not going to go up another 100-fold.

Maybe you’re not quite sure what $218,750 can buy you. A quick Zillow search should clear that up. You can buy a lovely two-bedroom condo in Jonesboro, Arkansas, or a beautiful two-bedroom home in Helena, Montana. For that amount of money, you could send a kid to a private college! You could also have donated that money to charity. Maybe you’d be interested in Bridging Tech or Laptops for Kids, which offer computers to students in need.

I’d also like to know your intentions for these shoes. Surely you don’t intend to wear them — not only are they terribly expensive, but they’re kind of busted. For significantly less money, you could buy shoes that look nice. Remember Carrie from Sex and the City? Her entire closet of gorgeous Manolos only cost $40,000! Carrie was practically a penny-pincher by your standards. Also, if you do wear them in public, you run the risk of someone recognizing them and asking all the same questions I’m asking right now.

Are you going to put them on some kind of pedestal? Are you starting a small museum of shoes in your home, which I imagine is some kind of Hudson Valley farm? Who but a bougie farmer would buy expensive Birkenstocks? And if you are starting a museum, will you be there when patrons visit? If so, count me in. I’d like to chat in person.

I fear your reasons for buying them may go beyond the arts. Is something creepier at play? Are you hoping to channel Jobs’ spirit? Is there a seance afoot? (Pun intended.) Ultimately, though, I want to ask you one question — the question we all have. Would you have made the same offer had they been Elon Musk’s Crocs?

More like this
Here's How Netflix Should Adapt Prince Harry's Memoir Into A Movie
By Ginny Hogan
Twitter Has *A Lot* To Say About The "Single Penalty”
By Sam Ramsden
What Is Pamela Anderson’s Net Worth? She Was Never Paid For Her Stolen Sex Tape
By Hugh McIntyre
Maya Jama’s Net Worth Definitely Won’t Give You The Ick
By Sophie McEvoy
Get Even More From Bustle — Sign Up For The Newsletter
From hair trends to relationship advice, our daily newsletter has everything you need to sound like a person who’s on TikTok, even if you aren’t.