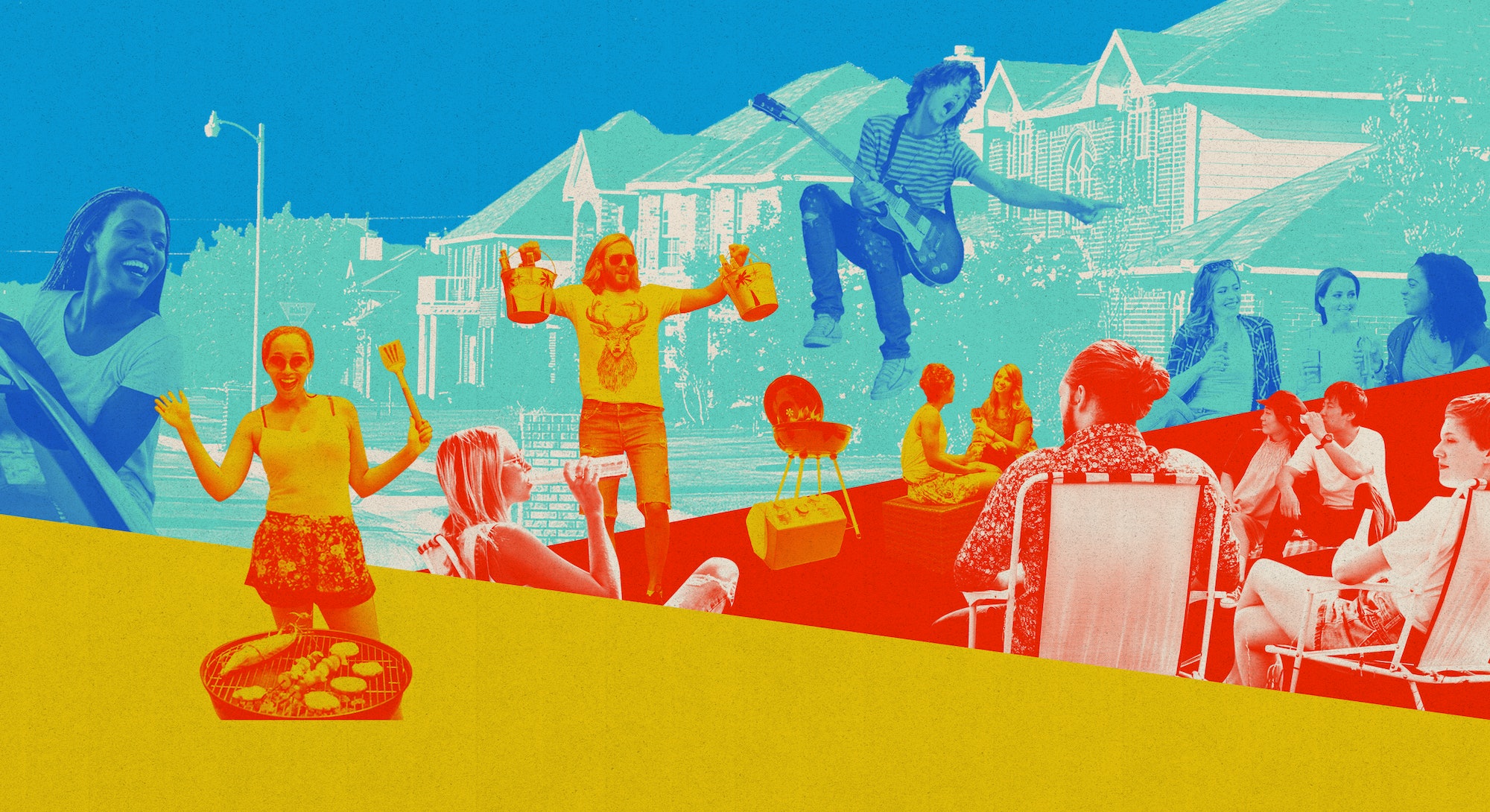 “It’s sterile,” former New York City Mayor Ed Koch once said of the suburbs outside New York City. “It’s nothing.” But 45 years later, many (affluent) city dwellers still decamp for Long Island and Westchester and Connecticut and even New Jersey. They have their reasons: good public schools, more space, not having to haul a stroller up to your sixth-floor walk-up. During COVID, the exodus went into overdrive: stuck working and homeschooling in the same 600 square feet, even diehard city-dwellers envied their suburban counterparts, who could let the kids out in a yard and shut the door on a competing video call. But for urban holdouts, the financial and logistical advantages don’t address the original critique of suburban life: Is it all still drudgery and key parties? Is there anything to do?

The first year of the pandemic made outdoor drinking the wellspring of social life everywhere, but in the suburbs it’s endured, and here you can drink in nature. Friends gather in each other’s yards or lawns, weeknights and weekends, with drinks and cocktails. It’s mostly BYO. In walkable suburbs like Montclair and Maplewood, New Jersey, drunk driving is not an issue; one dad calls the four-block radius where he socializes “the quarter.”

Miranda Jones, 37, a songwriter and vocal coach with two kids, moved from San Francisco to Montclair five years ago, seeking the drive and intensity of New Yorkers, plus outdoor space that wasn’t so crowded. In the summer she occasionally likes to walk her neighborhood sipping rosé or prosecco with freshly-grown mint and blackberries. She’d choose that over any wild night in the city. “I’m a singer, and it hurts my voice in a bar. I get ‘tie-tie’ and want to go to bed in five minutes.”

One thing you have to think about in this peripatetic drinking scene is refills. A dad in one Jersey suburb totes his beer in a cooler he refers to as the “organ bag,” because it keeps something essential and lifegiving on ice.

Another thing is bladders. When, during the pandemic, people were skittish about offering up their homes and bathrooms, Mr. Organ Bag made quick runs home. Then he went to an outdoor party with a friend who was staying with him, and the friend realized he would not be able to make it back to his host’s house in time. The friend went in some bushes — a sight that, when witnessed in the city, might make someone want to move to the ’burbs.

He and a couple of other dads play in a garage band, which is sometimes called “Debasement” and sometimes “The Delta Variants.”

Second only to the alcohol obsession is the fetishized outdoor food scene. Men (it is mostly men) are into their grills: Weber and Traeger, with heating sources including charcoal, gas, pellet/wood. The most coveted grill is The Big Green Egg. It’s a kamado grill, ceramic grill, and charcoal smoker in one. A medium retails for $700, although with accessories it can easily set you back more than a grand. Jay Hyne, 36, a father of three and attorney in Ridgewood, New Jersey, notes that there is some diversity: “Some families have opted for outdoor griddles as an alternative or supplement to standard grills.” If you go that route, you’re going to want a Blackstone.

Though entertaining often happens in the backyard, where the detached garage can be repurposed as a half-open-air bar, suburbanites must be careful to tend their front lawns so as not to draw the ire of their neighbors. Hyne says he has a neighbor who “is out there every day, mowing, edging, mulching, trimming, you name it. People mow and plant flowers and a lot of guys get super into yard work.”

David M., 47, a father of two in Sayville, Long Island who hosts the self-help comedy podcast Dopey, is obsessed with his garden. “I grow four kinds of basil; sage; eucalyptus; rosemary; two kinds of thyme; three kinds of tomatoes; zucchini; green peppers; flowers; and blueberries.” As a child growing up on the 21st floor of an affordable housing complex in New York’s Chelsea area, he watched The Joy of Gardening on Sunday mornings, sponsored by the Garden Weasel. Once he moved to Sayville in 2016, his partner’s hometown, “it made me feel cool that I could put seeds in the ground and yield these useful items. There’s something about how magical it is, to be able to grow food. Especially if you’re from Manhattan.”

Aaron, 51, a native Brooklynite and attorney who prefers not to use his real name, moved to Maplewood with his wife and children from Carroll Gardens, Brooklyn right after 9/11. The two summers of the pandemic were the best of his life.

He and a couple of other dads play in a garage band, which is sometimes called “Debasement” and sometimes “The Delta Variants.” They cover the Stones, the Dead, the Foo Fighters, and Bob Seger. On Facebook they dedicated their rendition of “Honky Tonk Woman” to Ruth Bader Ginsburg.

They usually play without an audience, in the drummer’s basement, but since COVID they’ve been doing it in Aaron’s yard. They invite friends to watch, and everyone brings their own beverages. “We’re having this aspirational moment of playing out more,” he said. For one supportive, loving crowd, they threw “52-Fest,” named that because the group of fans in question had been outdoor social drinking for 52 weekends straight since March 2020.

The night we speak on the phone, he has just gotten back from watching a different band, his drummer’s jazz combo, on a front lawn: “guitarist, bassist, him on drums, trombone and sax, and music in front of them,” Aaron says. “They had a significant set.”

They once hosted two hours of ax throwing at a venue called Bury the Hatchet, but they also do less gimmicky stuff, like paintball.

Adult sports are having a moment, especially those that can be done in groups. Pickleball is big, as is mountain biking, of a sort. David M. says he often sees “weird looking groups of cyclists all in cycle gear, cycling way too slowly on the side of the road. They’re old and young and fat and skinny but all wearing ridiculous Lycra outfits.” Jones says she has a couple friends who’ve gotten into roller-skating and rollerblading. “They couldn’t go to gyms.”

For those who prefer skirmishes high on conviviality and low on exertion, there are always lawn games. This summer, David M. played a lot of Cornhole with his partner and five other couples. The summer before he won a Pro Kadima tournament and got a Breaking Bad T-shirt as his prize. He thinks there may have been a drive-by parade.

During the games, the kids would swim, supervised, in his above-ground pool, which, by the way, was an extraordinary challenge to procure in the summer of 2020. Afterward, the parents would sing and play instruments on the patio, surrounded by Tiki torches. David M. played sober (he starts some days at an 8 a.m. 12-step meeting on the beach), but the other players drank beer, White Claw, and keto Margaritas.

Wear Your Politics On Your Lawn

Jones prefers solo exercise, which happens to afford a curbside view of America’s polarized political landscape. “I take long runs through different neighborhoods. There are the political signs, like ‘Science is real.’ Then you go over to Glen Ridge [a neighboring town] and it’s ‘Pro Glen Ridge’ and ‘Support Blue’ and no ‘Black Lives Matter.’”

There’s a big subset of people with the vape pens and weed devices, although these days it’s mostly gummies and cookies because everyone is worried about lung health.

In suburbia, there is a club for everything, and no one is embarrassed to join one. Hyne is a former officer of the highly engaged Ridgewood Newcomers Men’s Sports and Activities Club; he just passed the torch.

The Newcomers have always had a big presence. They once hosted two hours of ax throwing at a venue called Bury the Hatchet in nearby Paramus, but they also do less gimmicky stuff, like paintball.

One of their most popular events just happened: a 150-person progressive dinner that begins in a tent outside one resident’s home, with an open bar and waiters serving hors d’oeuvres. Then the group splits and walks or Ubers to different homes, where the food is catered and new residents get to make friends.

The Newcomers is so popular that it dropped its maximum-five-years membership limit, Hyne says. If you pay your dues, you can be a newcomer forever.

Do The Drugs For The Life You Have

“There’s a big subset of people with the vape pens and weed devices,” Jones says, “although these days it’s mostly gummies and cookies because everyone is worried about lung health.” She does have friends with a whiskey smoker, which is just what it sounds like: in goes ordinary whiskey, out comes smoke.

Once in a while, Jones and her friends go really crazy. For her 35th birthday she and her husband threw a “Come as You Would Senior Year of College” party, which featured beer pong, weed, and late-night pizza. “People got high on the train tracks behind the house,” she says. “That was really fun, to see all these people with high-powered jobs really down. Thank God I’ve found people who can let go a little bit and are not so uptight.”

This weekend they’re having another bash, for her husband’s 40th. “No kids allowed because we all deserve a night without kids after this pandemic,” Jones says. “It’s all outside. We borrowed heaters and a Solo stove.” Lung health will not be top of mind. “We built a sukkah for Sukkot, and we’ve turned it into a vape den, with vaporizers and gummies and Clorox wipes for using the vape pens.” There will also be a jazz band, and hot toddies, and a selfie booth “whose details we are ironing out,” Jones notes. “When you accept that you’re living this more conventional life that is not the bohemian life you expected, you realize that these suburbs are made for the way you’re living.”