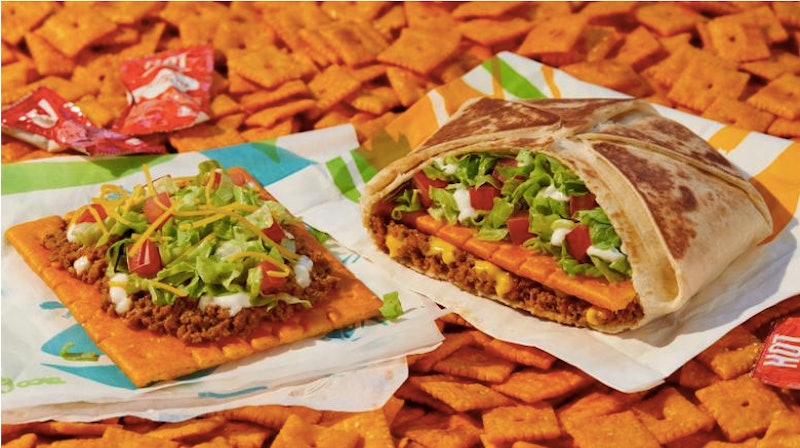 This just in: Taco Bell is revving up the nostalgia (and cheddar cheese) with the testing of two new menu items that contain a massive Cheez-It cracker. And in this case, “massive” means a whopping 16 times larger than the standard cracker you can probably recall from elementary school snack time. Only now, the iconic baked snack is either replacing the crunchy tortilla in a tostada or stuffed inside a Crunchwrap Supreme.

Until July 4, at a Taco Bell store in Irvine, California, these two *potential* menu items are available to guests looking for a food experience as revelatory as when Doritos Locos Tacos were successfully released back in 2012. Fun fact: The fast-food chain sold more than $350 million tacos in less than a year following its initial launch — and this Cheez-It collab might just be Dorito era all over again. Fingers crossed.

On June 28, the official Taco Bell Twitter posted this visual of the aforementioned mega Cheeze-It in tostada form:

The Big Cheez-It Tostada consists of typical tostada ingredients like ground beef, shredded cheese, sour cream, lettuce and tomatoes. The only difference (and it’s a big one) is the Cheez-It base instead of a crunchy tortilla. For $2.49, it looks like a late-night snack that won’t break the bank while still giving that cheddar fix.

Coming in hearty, the second menu item being tested is the Big Cheez-It Crunchwrap Supreme. Think the classic Crunchwrap Supreme with its soft tortilla, ground beef, nacho cheese sauce, lettuce, tomatoes, and sour cream— just with a mega Cheez-It in place of the tostada shell that typically sits in the middle of the wrap. Priced at $4.29, this item can be both lunch and an experience.

While these menu options are just starting out in their experimental phase at one lucky location, here’s hoping that they pass the tests with flying colors and make their way to the official menu ASAP.

More like this
I Tried The $20 TikTok Viral Oishii Strawberries — Here's What I Thought
By Sophie Hanson
Trust Me, Pickle Martinis Are The New It Drink Of The Season
By Emma Carey
The Finger Lickin’ Good KFC x HYPE Collab Serves A Bucket Bag For Chicken
By Darshita Goyal
Dunkin’s Pumpkin Spice Latte Is Officially Back This Week
By Mia Mercado
Get Even More From Bustle — Sign Up For The Newsletter