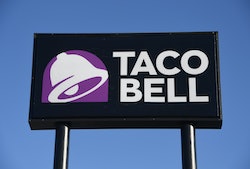 Taco Bell's menu has always stuck to its theme. As a Tex-Mex chain restaurant, the company did well to stay in the realm of tacos, quesadillas, and burritos. It wasn't even until two years ago that the chain decided to add French fries to its menu. So when customers heard that the fast food chain was testing out a new, unorthodox menu item, it became a pretty big deal. Brace yourselves: Taco Bell is testing out Crispy Chicken Wings.

Before you jump in your vehicle and speed to the nearest Taco Bell drive-thru, these Crispy Chicken Wings have only been available at a location in Fullerton, California. The Foodbeast, a popular food and drink blog, spotted the wings being sold in boxes of five with "bold Mexican seasoning" and a side of ranch — all for $4.99.

The new addition of wings came as a surprise to many, especially considering that in late July, Taco Bell announced that it would be getting rid of some classics from the menu, including the Grilled Steak Soft Taco, 7-Layer Burrito, Nachos Supreme, Beefy Fritos Burrito, Spicy Tostada, Triple Layer Nachos, Spicy Potato Soft Taco, Cheesy Fiesta Potatoes, Loaded Grillers, Chips & Dips, and the Mini Skillet Bowl. The removal of most of these items were due to Taco Bell's desire to streamline orders during the coronavirus pandemic.

Heather Mottershaw, Taco Bell’s vice president of Product Development, told Forbes that Taco Bell was going through a "menu evolution," and that the discontinuation of old products would leave space for some new additions. It seems as though if all goes well, the Crispy Chicken Wings could become a new Taco Bell favorite for customers. Though, not everyone felt this way. When Twitter caught news of the potential addition of chicken wings to Taco Bell's menu, many users expressed their reluctance to try them. Some even poked fun at anyone else who may be tempted to.

Whether the Crispy Chicken Wings make it out of Fullerton is unclear, but either way, the prospect of a staple fast-food chain changing up its menu like never before is definitely something that'll cause some excitement.

More like this
An Expert Weighs In On The Viral Raw Carrot Salad Trend
By Alexis Morillo
Dolly Parton Released 4 New Baking Mixes With Duncan Hines
By Alexis Morillo
Do Green Powders Work As Well As TikTok Says They Do?
By Carolyn Steber
16 Trader Joe's Appetizers That Are Total Party-Pleasers
By Kaitlyn Wylde
Get Even More From Bustle — Sign Up For The Newsletter
From hair trends to relationship advice, our daily newsletter has everything you need to sound like a person who’s on TikTok, even if you aren’t.