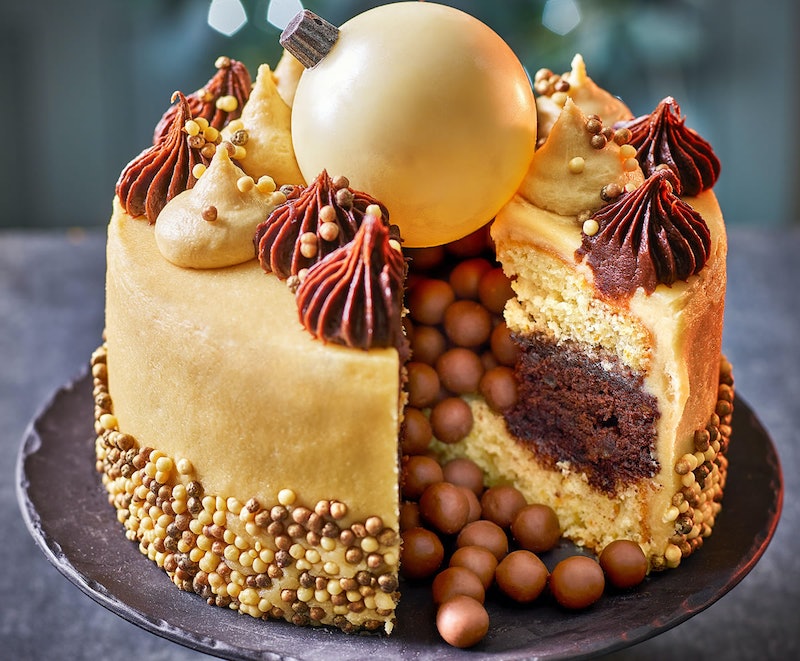 There might still be leaves on the trees and yes, we're clinging onto summer for dear life but you guys, winter means Christmas and all the nosh that goes alongside it. Tesco have announced their Christmas range and ding dong merrily on high, they're selling the most stunning cake you've ever laid your eyes on.

Every year all of the big supermarkets compete with each other for the biggest, best, most luxurious, and delicious festive ranges. If it's not an enormous baked cheese, it's a two metre long pig in blanket, and if that's not enough there's pudding selections like Aldi's giant Ferrero Rocher.

The festive menus cover your animal, vegetable, and mineral as well as your sweet and savoury and although it's early to call it — Tesco might be killing the game with their magnificent pudding selection. Well, I probably ought to veer away from the word 'selection' as eyes are on the prize for the jewel in their Christmas dessert crown. Guys, they are selling an actual Bauble cake.

As a follower of culinary rules, I'm going to leave that delight until last so let me give you a peep into some of the savoury offerings in Tesco's festive range. Maybe put a bib on because, yannow, drool.

As veganism is on the rise, it looks like retailers are increasingly taking note and Vegan Food & Living reports that Tesco are leading the way with offerings which clearly aren't an afterthought. There's No Prawn Firecracker Dippers (£4), Jackfruit Bon Bons (£2), and No Mozzarella Sticks (£3) for the vegan among us to nibble on.

Delish reports that you can go a bit posh if you fancy, forget about turkey and try their French Trimmed Crackling Pork Loin, with Truffle & Porcini Butter (£15)? Or maybe you're more into Lamb Leg with Seville Marmalade Maple Glaze & Seeded Crumb (price on request)? In terms of avoiding carving squabbles though, an Easy Carve Duck with a Maple & Orange Glaze (price on request) might be more up your alley.

You can also enjoy trimmings like Giant Pigs In Blankets (£2 for 10) and Brussels Sprouts with Chestnuts & Seasoned Butter (price on request).Veggies can chow down on a Wicked Kitchen Wellington (£7), a Wicked Kitchen No-Turkey Roast Crown (£5), and fear not the much celebrated Pigless Blankets are back (£2.20 for 10).

Now to the ultimate piece de resistance, the centrepiece worth taking selfies next to: guys, it's the Chocolate Orange & Maple Bauble Cake (£13). When you cut into this cake, which BTW serves 14, a secret centre filled with chocolate malt balls will spill out onto your plate. Not to be outdone, the cake has two layers of citrusy sweet orange sponge, a sumptuous layer of chocolate and orange brownie held together by orange and Belgian chocolate buttercream. All this joy is encased in a thick layer of maple butter cream and topped with huge white chocolate bauble you can all fight over at the end.

There's also a pretty stunning Wicked Kitchen Vegan Ginger Chai Cake (£9) which is heavy with seasonal spices, ginger, and soaked in chai tea before being hand frosted, topped with caramelised ginger pieces and sprinkled with a dusting of cinnamon sugar.