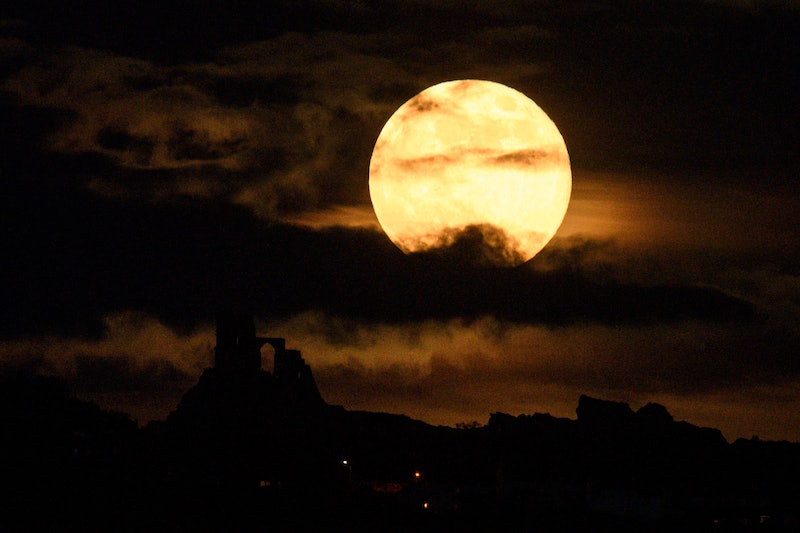 Full moons are always a pretty magical sight, but on May 26 you can expect a particularly special night sky. The moon is set to appear bigger, brighter, and, in some places, redder than normal. According to the Old Farmer's Almanac, on May 26 the moon will be ever so slightly closer to the earth, making it the biggest in 2021. Here’s how to see May’s super moon.

According to NASA, the term “super moon” was coined by astrologer Richard Nolle in 1979. It describes a full moon at its closest point to Earth in its orbit. Sky News explains that a super moon appears around 14% bigger and 30% brighter than usual. The new outlet quotes Patricia Skelton, astronomer at the Royal Observatory in Greenwich, who said that the best time to see the May 26 super moon will be in the early hours of Wednesday morning (around 2:15 a.m.) or later that day around noon.

Where can you see the super moon?

“The super moon will rise in the east around half an hour after sunset, and will be visible throughout the night,” Skelton told Sky News. There’s something mystical about a full moon, and you’ll want to catch a glimpse at it at its brightest and biggest. However, the weather may hinder your chances of seeing it at all.

“Currently the clearest skies for the best views look to be across central and southern parts of both England, Wales, and central Ireland,” reported Sky News weather presenter Nazaneen Ghaffar. Those based in northeast England, and eastern and northern Scotland may be left disappointed as the cloud could disrupt your view.

Stargazing guides recommend that if you want to get the best view of the night sky, you should steer clear of light pollution as much as possible. Turning the lights off in your house might help, as will some background research to inform what you’re looking at.

What is the super blood moon?

This isn’t the first super moon of 2021. On April 26 there was a pink super moon – although it actually appeared more golden. Royal Observatory Greenwich explains that the names for moons come from native American culture, and May’s super moon is also dubbed a ‘super blood flower moon’, because in parts of the world it will appear red.

May 26 also coincides with a total lunar eclipse. This occurs when the Earth passes directly between the sun and moon; the last one was in Jan. 2019. Expect the moon to take on a reddish hue, as the sunrises and sunsets on Earth are projected onto its surface.

A red moon sounds otherworldly, but it won’t be visible around the world due to time differences. According to the Guardian, the super blood moon will be most visible across the Pacific, the western half of North America, the bottom of South America, and eastern Asia. “Hawaii has the best seat in the house, and then short of that will be California, and the Pacific north-west,” said NASA’s Noah Petro, the project scientist for the Lunar Reconnaissance Orbiter.

More like this
Pret & Costa’s Coffee Is The Strongest On The High Street, According To Which?
By Sam Ramsden
Here’s Where The NHS Nurses’ Strike Currently Stands
By Sophie McEvoy
Gen Z Are Twice As Likely To Identify As Queer, According To New Data
By Sam Ramsden
Here’s What TikTok's "Mascara” Trend Is *Really* About
By El Hunt
Get The Very Best Of Bustle/UK
Sign up for Bustle UK's twice-weekly newsletter, featuring the latest must-watch TV, moving personal stories, and expert advice on the hottest viral buys.