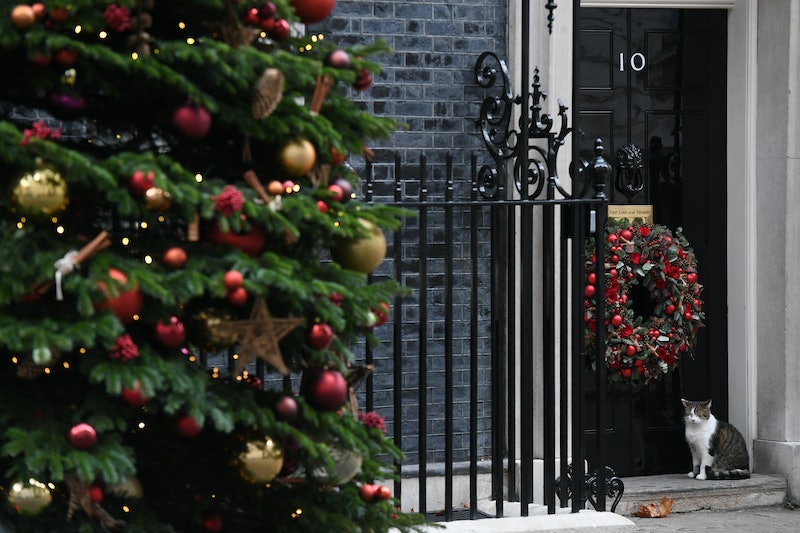 It would seem that everywhere you turn right now, everyone is talking about that alleged Christmas party. And it’s safe to say that many aren’t too happy that the people who are supposed to be navigating the country through a global pandemic are now being accused of having Christmas parties on the down-low, whilst everyone else was stuck at home.

If you’ve managed to avoid the news and haven’t heard about No.10 Downing Street’s 2020 Christmas party, then we’ve broken it down for you below.

What happened at the alleged Christmas party?

The first reports of the alleged Christmas party came on Nov. 30, 2021, in The Daily Mirror, which reported that “officials knocked back glasses of wine during a Christmas quiz and a Secret Santa” and “around ‘40 or 50’ people were said to have been crammed ‘cheek by jowl’ into a medium-sized room in Number 10.” One of their sources even alleged that there were “many social gatherings” in Downing Street last year. The BBC also reported that a source had told them that food and drink were served, games played, and the party went on past midnight.

The party is supposed to have taken place last year on Dec. 18. The official Downing Street Christmas party was cancelled – replaced with a Zoom quiz – but reports seem to suggest an unofficial party still took place for Downing Street officials and staff. Prime Minister Boris Johnson isn’t said to have attended but allegedly “turned a blind eye” to the events.

Further reports on Dec. 10, 2021 revealed that Boris Johnson's most senior communications adviser, Jack Doyle, was present at the event and handed out "thank you awards" on the night of Dec.18 party last year. Doyle has been responsible for overseeing the communications strategy for the government since The Daily Mirror first revealed details that a party had taken place.

Two days before the unofficial party – on Dec. 16 – the UK entered a tiered lockdown system with London being placed in Tier 3. This meant all indoor mixing was banned except in the case of household bubbles. People were only allowed to gather if it was “reasonably necessary for work purposes,” which would arguably not include a Christmas party.

And, since then, reports even more parties have been revealed. On Dec. 14, The Daily Mirror released an image of an event at the Tories’ Westminster Headquarters organised by Shaun Bailey’s mayoral campaign. The party took place on Dec. 14 last year, whilst London was under Tier 2 restrictions, which banned socialising between households in indoor settings. The image shows 24 people crowded into a room surrounded by buffet-style food, drink, and festive hats. Bailey has since quit his position as Chair of the London Assembly’s police and crime committee and disciplinary action has now been taken against four members of staff involved in Bailey’s campaign.

What has the government said about the alleged party?

There has been a mixed response from government officials, including Boris Johnson, with some denying the event ever took place and others arguing that the party didn’t break any of the lockdown restrictions in place at the time. A response that has been reiterated once again by the Prime Minister on Wednesday (Dec. 8) at Prime Minister’s Questions (PMQs).

On Dec. 7, ITV released a video they obtained that showed government officials rehearsing a news conference on Dec. 22 of last year. Allegra Stratton, the then-press secretary for the Prime Minister, is seen visibly laughing and joking about the Christmas party with colleagues who were pretending to be journalists. Stratton is asked about reports of a party to which she responds “I went home” but after another colleague jokes that the party was just “cheese and wine,” she goes on to say “Is cheese and wine all right?” and “this fictional party was a business meeting and it was not socially distanced.”

Johnson apologised for the video in PMQs saying he “understood and shared the anger” at seeing government officials “make light of lockdown measures,” and Stratton announced her resignation later that day (Dec. 8). In an emotional statement Stratton said she would “regret the remarks for the rest of my days”. Johnson added that he’s asked the Cabinet Secretary to look into what happened and report back to him but still denies a Christmas party took place at Downing Street last December.

The reactions so far

Many politicians on both sides of the aisle have criticised the government for both the alleged Christmas party and their subsequent handling of events being uncovered. Labour leader Sir Keir Starmer has even called upon Johnson’s Conservative colleagues to vote him out as leader of the party, asking whether the Prime Minister had the “moral authority” to lead this country.

It’s not only politicians who have called out the government for the alleged Christmas party. Ant & Dec alluded to the story on last night’s episode of I’m A Celebrity...Get Me Out of Here!

Elsewhere, key workers expressed their anger with the government.

A party taking place for government officials while the rest of the country effectively had their Christmases cancelled is pretty significant. Families were unable to gather and celebrate together. People couldn’t visit sick or dying relatives in hospitals. Key workers were facing mounting workloads in the height of lockdown. And so, to see the very people who are making and enforcing the rules allegedly breaking them will likely be quite the blow to members of the public. The Deputy Leader of the Labour Party even said “nearly 150,000 people have died from COVID-19 in the UK. They partied, we paid.”

What is happening about the alleged Christmans parties at No. 10 Downing Street?