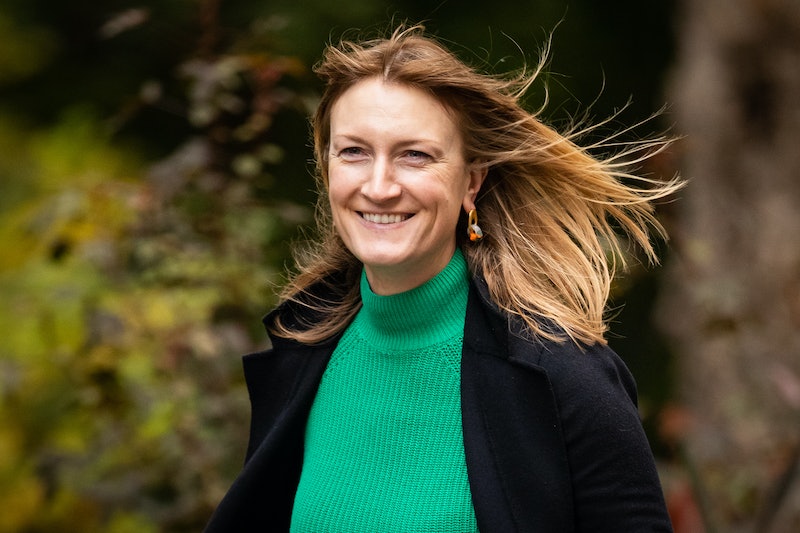 It's hard to remember a time when the news cycle wasn't dominated by coronavirus updates and briefings from the government on where they're at with containing its spread. Up until now, we've been used to seeing Boris Johnson, Matt Hancock, or other government officials standing behind the podium but, from November, former journalist Allegra Stratton will lead No 10's briefings. Per BBC News, Stratton will act as Press Secretary and will deliver coronavirus updates in a similar style seen at the White House by Donald Trump's press secretary Kayleigh McEnany. Despite government not yet confirming the new role, people are still wondering, who is Allegra Stratton, and what will her new role involve?

Stratton has had a number of significant roles across major publications throughout her career. After leaving Cambridge University (where she read archaeology and anthropology), she went on to work as a producer for the BBC, on the foreign desk of the Times newspaper, and as a writer for for the Independent and the New Statesman. She later joined the Guardian as a political correspondent, presenting the newspaper's Politics Weekly podcast with journalist Tom Clark.

Earlier this year, she become director of strategic communications for Chancellor Rishi Sunak.

But what will the new role mean for Stratton?

As an official press secretary, Stratton will host daily question-and-answer sessions with the UK's press, per Reuters. At present, political journalists are able to quiz an official PM spokesperson every day, but this time they'll be televised. From the sounds of it, it'll be delivered in a similar format to that currently taking place at the White House. (Which, as we've seen in the U.S., can sometimes become the source of SNL content...)

Both at work and home, Stratton is no stranger to politics. She's married to James Forsythe political editor at The Spectator. Politico once referred to the couple as one of Westminster's “power couples.” Together they have two children, Vaughn and Xanthe. Back in 2018, Stratton spoke to the Daily Mail about maternity leave and how women are often made to feel as if they lag behind when they return to work.

While the government has yet to confirm Stratton's appointment (it was also rumoured to be former This Morning host Richard Madeley for a while), Boris Johnson introduced the idea of a press secretary back in July as a way to give the public "direct engagement" with government, say BBC News. Although they became routine at the start of lockdown, Number 10 scrapped its daily televised press conferences back in June. They now only take place when the government need to announce an important update.

As the UK faces a second lockdown, the proposed daily briefings will become a much-needed source for coronavirus information.