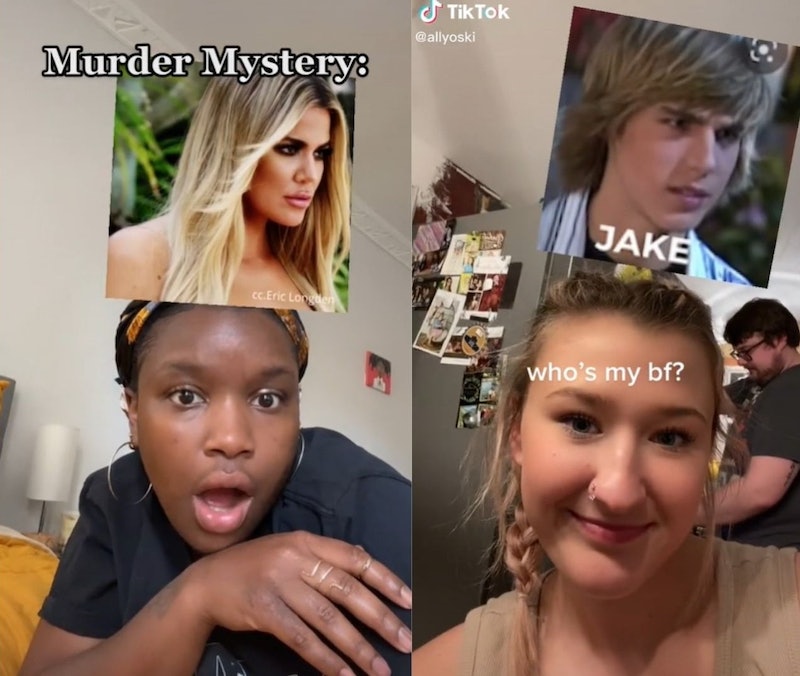 There are a number of hugely popular filters on TikTok that randomly select celebrities, and the ever so inventive patrons of the app are using them to create murder mystery games and soap opera plot lines. TikTok’s “my famous fairy godmother” and “childhood Disney boy” filters, among others, have been used in more than 70k videos on the app collectively.

Whether it’s setting up murder mystery plots or playing a game of MASH for the internet age, TikTok’s celebrity randomizer filters are serving as virtual roulette dice and racking up millions of views. Here’s how you can play.

Inside The ‘Murder Mystery’ Trend

Used in more than 30k videos, TikTok’s “my famous fairy godmother” filter is being used to set up murder mystery plot lines. Users set up questions like, “who is the victim?,” “who is the investigator?,” and “who are the prime suspects?” before letting the filter randomly generate a celebrity image.

One user, @thisiscourtneytaylor, took the filter for a spin, setting up the ultimate murder mystery, collecting 11M views, 2.1M likes, and thousands of comments like, “I'm so ready for this documentary.” In her video, the victim and subject of the mystery is none other than the Prince of Bel-Air himself, Will Smith. His body was discovered by Khloé Kardashian, his murder investigated by Oprah Winfrey, who’s primary suspects are Khloé Kardashian, Terry Crews, Kylie Jenner, and Beyoncé. In the end, it’s Kris Jenner who gets locked up for the crime. Be honest, if the last few sentences appeared in the plot description of a true crime miniseries, would you even bat an eye?

Another user, @skylarrr_marie, played the same game, her video setting up the murder of Zendaya, with the top suspect as Tom Holland, who (plot twist) is also the lead detective! Seriously, this trend is giving Netflix Originals writers’ room.

Inside The ‘Disney Boyfriend’ Trend

User @paige.shanahan has been leading the Disney boyfriend trend, posting multiple videos using the filter and collecting more than 3M views. Her most viral video uses the filter to set up a soap opera-esque season of her life, including her boyfriend, bestie, secret love affair, and more. Her video, which currently has 585k likes and nearly 2,000 comments, sets her up with the ultimate Disney Channel love triangle – in a relationship with Hannah Montana heartthrob Jesse, and pined after by Good Luck Charlie’s Gabe Duncan.

Another user, @allyoski, created a Hannah Montana melodrama of her own, finding herself in a relationship with Jake and a secret affair with Jesse. Her video has more than 1.7M views and hundreds of comments like, “congratulations you’re Hannah Montana,” and “I got Jackson twice…how does it feel to be God’s favorite?”

Whether you’re using these filters for a bit of internet fun, or to write the next great soap opera, you’re sure to rack up a few million views in the process.

More like this
Ashamed Of Your Screen Time Stats? Here's How To Change That
By Alexis Morillo
11 Super Bowl Instagram Captions To Use On Game Day — Even If You Don’t Like Sports
By Alexis Morillo
Learning To Love, Not Judge, The Lunchbox Wives Of TikTok
By Esther Zuckerman
24 Funny Valentine’s Day Captions To Use No Matter Your Relationship Status
By Jessica Booth
Get Even More From Bustle — Sign Up For The Newsletter
From hair trends to relationship advice, our daily newsletter has everything you need to sound like a person who’s on TikTok, even if you aren’t.