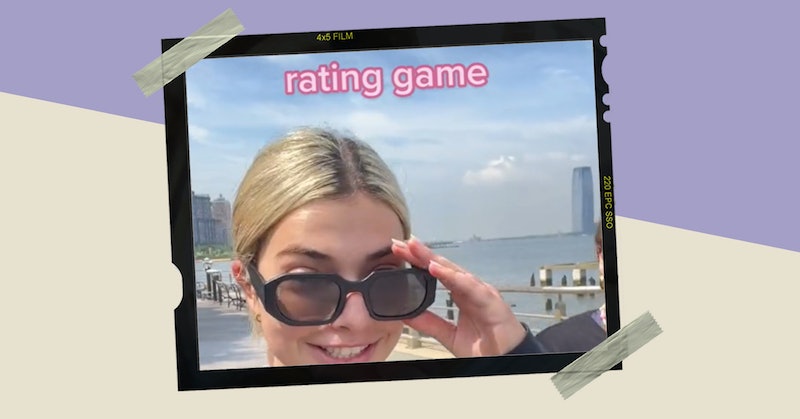 They’re a nine, but they can’t use chopsticks. They’re a four, but they have a credit score over 700. They’re an eight but haven’t read a book since college. These are the rules to TikTok’s most popular game of the moment, the rating game. Hugely viral online right now, the rating game poses existential questions for the daters of the world like, “how attractive is attractive enough to make up for navy blue bed sheets and a Wolf Of Wall Street poster on the wall?”

TikTok’s rating game is a new take on the stale superficial rating scales of ages past. The rules are simple – ratings on a scale of one to 10 are welcome, only if paired with a hyper specific and relatable qualifier. With this qualifier in mind, players must assign a new rating, proving that looks are not the only thing that matters. The game has been mainly popularized by women on TikTok, and functions in the same vein as “the ick,” calling out the hyper specific details that alter ones attraction to another. Hundreds of videos populate the tags #ratinggame and #ratingmen on TikTok, each collecting 1.1 million views and 2.7 million views, respectively.

Influencers @kitkeenan, @rubyrubyrubyrubyrubay, and @serenakerrigan shared their game play on TikTok, earning more than 121,000 views and 7,000 likes in only a few days. The comments section was quick to throw out more plays including, “He’s a 10 but he was on a dating show,” and, “he’s a 10 but uses Facetune.”

Another user, @witherinlibby, played the game with her friend, earning more than 81,000 likes and more than half a million views. The commenters’ favorite quips? “He’s a nine but he’s searching for a ping pong ball,” “he’s a two but he posted an infographic about some social cause,” and “he’s a 10 but he actively posts on his LinkedIn profile.”

User @griffengrice joined the game with more than 24,000 likes, 172,000 views, and hundreds of comments. The most popular game entries from that video include, “he’s a two but he’s a really good hip hop dancer,” and “he’s a four but he plays hockey.”

So, who else can play the rating game? One user, @tarikhagen, joined the game to satirically call out the less nuanced way some straight men approach dating. “Okay she’s a six, hardcore racist, but she’s into you,” he quips, “ooh that’s tough, probably 10,” he self responds. The comments echoed this outlook with messages like, “I would give a tree a chance if I approached me first,” and “As long as she’s into me she’s a 10.”

Still, jokes can be made from anyone on the app all in good fun — after all, the people of the internet are self aware enough to know their standards are sometimes too high...or too low. Game plays like “she’s a nine but she shotguns beers at parties to look cool,” “she’s an eight but she cried when One Direction split up,” and “she’s a 10 but she says ‘period’ at the end of every sentence,” are some of the examples users have called out for this game. The key to keeping this game fun? Keeping it light. Posters and commenters alike join in on this trend to poke fun at the little quirks we all have.

TikTok’s best trick is taking something old and tired and repurposing it for a more connected, dare I say funnier, age. There is nothing more boring than rating someone on a scale of one to ten, unless that rating is determined by their fashion choices they listen to or the sushi they order. They’re a 10 but exclusively order California rolls and wear light wash jeans, what’s your rating?