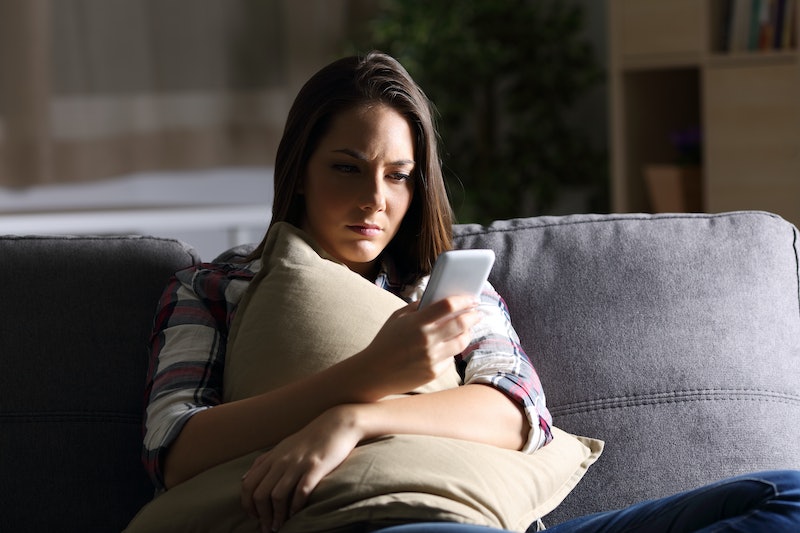 If your feed is full of shadowy, backlit dancers, then you've encountered TikTok's silhouette challenge. The viral trend involves special lighting and a filter to show off your body's silhouette, but there's been some controversy: Warnings about participating in it began circulating online earlier this week as many tutorials about using the filter often expose scantily-clad or nude bodies.

Though the social media challenge originated as a fun way to show off dance moves à la Beyoncé's "Partition video," the trend quickly went downhill as internet users figured out how to reveal participants' bodies without their consent. Here's everything you need to know about the challenge, its security threats, and what you can do to protect yourself.

What Is The Silhouette Challenge?

The TikTok challenge blew up online recently as users took to the platform to strike a pose. The TikToks, set to a remix of Paul Anka's "Put Your Head On My Shoulder" and Doja Cat’s “Streets," usually start with the user wearing loose clothes. When the beat drops, they pose and the filter changes to a silhouette that highlights their body, which appears to be wearing tight clothing or nothing at all. The videos often use a Snapchat filter to achieve the silhouette effect, which shrouds the body in shadows over a backdrop of red lighting.

Users initially celebrated the trend as a way for people to feel sexy and confident in their bodies, and even praised it for its body positivity. Some of the challenge's most popular videos even garnered millions of likes.

So, Why Are There Warnings?

The silhouette challenge trend took a turn for the worse after tutorials demonstrating how to tweak the filter to unveil TikTokers' bodies started spreading online. Dozens of how-to videos circulated on YouTube, according to reporting from Buzzfeed, with other tutorials popping up on Reddit and Twitter amassing thousands of views. Though certain content has since been blocked, there are still instructional guides out there.

The tutorials represent a massive violation of consent since TikTokers' bodies are unwittingly exposed. Some #SilhouetteChallenge creators have even become targets of victim-blaming, which criticizes them for the predatory behavior exhibited by the individuals who chose to disregard consent and remove the filter.

What You Can Do To Protect Yourself

In backlash to this violation of privacy, people have taken to the internet to warn others about the dangers of participating in the trend.

"Just make sure you're being cognizant of what you're wearing before you actually do all the editing for the final product," says one TikTok creator, @lostvsnryshots. "Anyone can easily take those images and revert them back to the original."

If you're thinking about posting a silhouette challenge TikTok, be sure to think twice given the warnings. If you do, wearing clothing during the filtered portion of the video can protect you from unwanted creeps exposing more than you'd like.