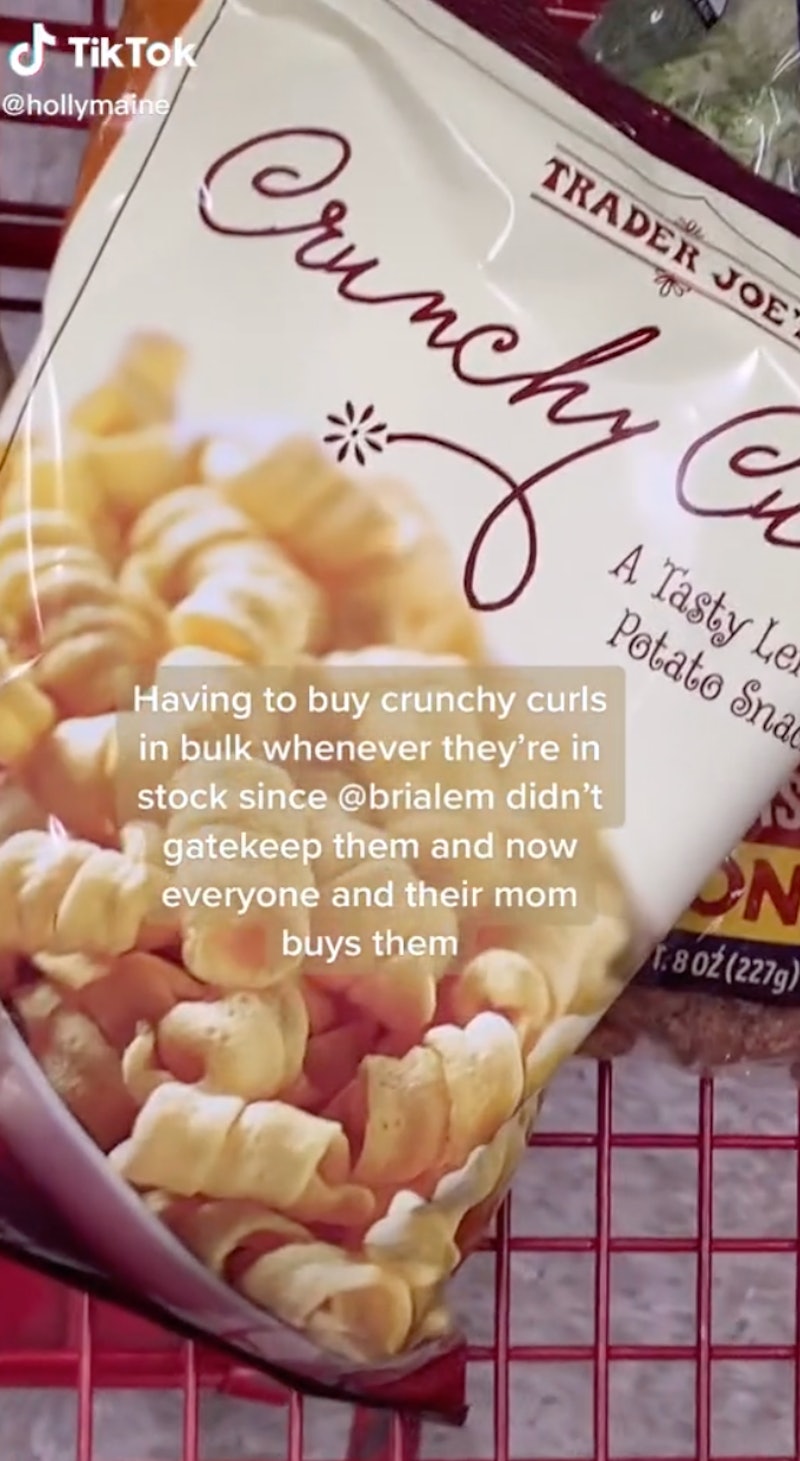 Of all the snack content on TikTok, there’s one brand that reigns supreme: Trader Joe’s. One of the latest snacks at center stage? Crunchy Curls, which have recently reached celebrity status on the clock app. Videos hashtagged #CrunchyCurls have amassed nearly a million views on TikTok. With a texture that lies somewhere between a cracker and a thick-cut potato chip, the snack can be found on pretty much any foodie’s page. The potato-lentil curl initially went viral on the social media app after creator Bria Lemirande raved about them on her TikTok account @brialem, where she posts Trader Joe’s hauls and The World’s Most Calming Cooking Videos Ever™.

Since her first video calling all Crunchy Curl enthusiasts to unite back on Oct. 29, her 1 million followers have raced to their nearest TJ stores to get ahold of the snack before it goes out of stock once again (which has been a recurring event for the past few months, according to TikTok users).

As for her influence when it comes to the savory snack, Lemirande does take some credit. “At first, nobody really knew about the Crunchy Curls and I think they were a little misunderstood because of how plain they are at first,” she tells Bustle. “Sometimes people have to get to the 10th to 20th Crunchy Curl to really start loving them (just trust me) but once you are hooked…you’re hooked!”

So what is the secret sauce to the Crunchy Curl? And how are TikTokers incorporating the simple snack into their daily routines? Hint: Bria eats them as a side with her morning avo toast.

Pictured: Evidence of the Crunchy Curl revolution. Even if you can’t find them at your nearby TJ’s, the name is still so fun to say.

Before tasting the vegan and gluten-free snack, you should know you’re in for quite the experience. Unlike the brand new Fancy Cheese Crunchies from Trader Joe’s, which are generously seasoned with truffle and cheese, Crunchy Curls are known for their tasteless taste, if you will. The ingredient list is also surprisingly short — they’re made up of lentil flour, potato starch, soybean oil, pre-gelatinized potato starch, and salt. With their prominent potato flavor and near-buttery aftertaste, these are the kind of snack you have to keep munching on to truly understand why everyone loves them so much. As their aptly titled name goes, the satisfying curly shape and consistent crunch are what define this munchie and make them hard to put down during snack sessions.

In one February video sharing her top 10 favorite foods, Bria tells viewers, “They don’t taste like much, but they do have a buttery, salty flavor and a really addicting crunch.” (Crunchy Curls came in at #4 on the list, by the way.)

Natalie Ludwig, another TikTok foodie by the username @eatsbynat, reviewed the viral snack on her page in March. She rated Crunchy Curls a 10/10, saying, “These are incredible. They’re so flavorless, yet so flavorful.” It’s safe to say an oxymoron never tasted so good.

While Crunchy Curls can be eaten on their own, some TikTok users pair the subtle curl with various dips or serve them as a side to their main dish.

You can dip them in TJ’s Green Goddess dip like @steen.eats for a creamy, zesty, avocado-rich appetizer.

Or consider everything bagel dip. This Trader Joe’s Greek-style yogurt dip alone will add all the flavor you need to your Crunchy Curls. Really, any dip (even homemade ones like these) will go great with these babies.

The power of social media at its finest, folks. Take this as the ultimate sign to add these to your Trader Joe’s shopping list. Just call beforehand to make sure they have them back on the shelves.

More like this
Are We Drinking Rosé All Wrong?
By Sheila Yasmin Marikar
8 TikTok Pasta Recipes To Try Out At Home
By Emma Garza
Meet The Spice Company Founder Who Sees Chai As A Metaphor
By Madhuri Sathish-Van Atta
M&S Is Selling A Corgi Version Of Colin To Toast The Queen’s Platinum Jubilee
By Sam Ramsden
Get Even More From Bustle — Sign Up For The Newsletter