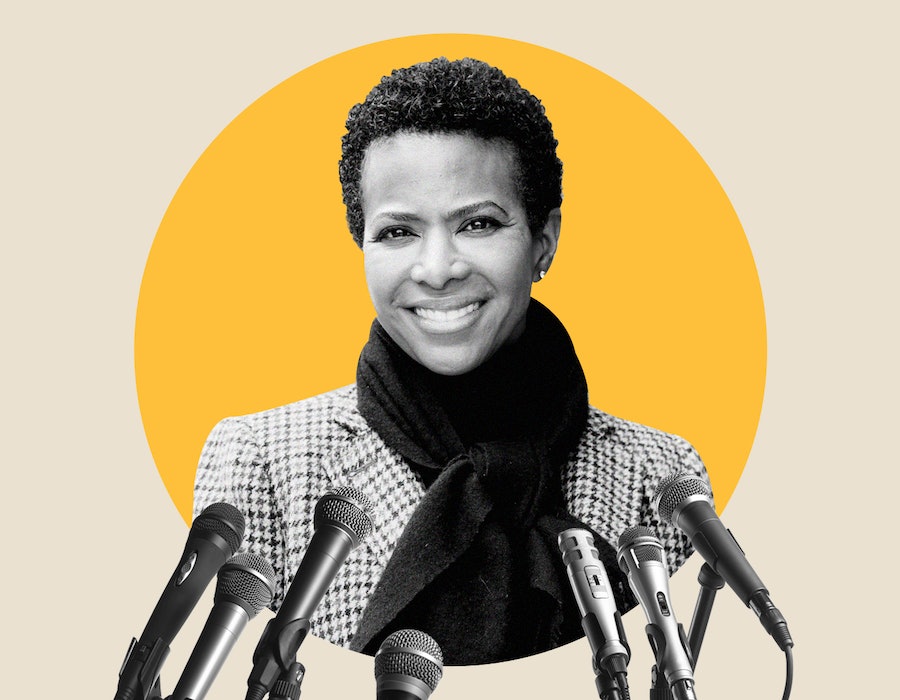 In Bustle's Quick Question, we ask women leaders all about advice — from the best guidance they've ever gotten, to what they're still figuring out. Here, Julia Paige, Director of Social Impact at Uber, tells Bustle about her work with Uber, her interest in social impact, and advice that serves her well in her career and life.

When Julia Paige started as the Director of Social Impact at Uber in February, a position to implement ethical and sustainable practices into the company, she had no idea what she was in for. Within a month, Paige, who had previously held roles as an Associate Producer at NBC News, Deputy Chief of Staff to Maria Shriver, and Director of Creative Content at Google, was thrust into the coronavirus pandemic alongside the rest of the world and had to figure out how to meet the needs of the public. Paige suggested Uber could provide 10 million free rides and meals to people in need around the world.

"I had been there for like five seconds, and yet I'd come up with an idea and they said, 'OK, let's try it,'" Paige tells Bustle. "We figured out our budget, we allocated across the globe, we met with all the different teams, and everybody took their pot of resources and went running."

Though her to-do list has been consistently packed ever since — coordinating ways for essential workers to get to and from work and with medical equipment companies to transport resources to hospitals — she says she's grateful to be making a difference.

Below, Paige shares the worst advice she's ever received, how she found her career path, and how she navigates being a woman in a male-dominated field.

JP: I worked with Maria Shriver for many years. When you're around Maria, you'll be doing social impact whether you want to or not. That's how she leads her life and how she works, so she gave me a great indoctrination into that world. After seeing how government works and how you can work with nonprofits to make a difference, I was set along that path.

Maria wanted me to lead this women's conference — it used to be a kind of "ladies who lunch" thing — but I told her I wouldn't go to these types of events, so she told me to make them into something I would go to. With just those instructions, we made it into this one-of-a-kind gathering of 10,000 women in California. We had everyone from Oprah to the Dalai Lama. It showed the impact that you could make with telling a good story, which is something I lined up my career around, because I think a good story is how change is driven.

There are certain people who try to outline their whole career. But for me, I've always gone by the rule that as long as I find the work interesting and that I feel that my curiosity is being met, I'm happy.

JP: When I was coming up in my career, I often heard, "You really need to think about your career path and what you're going to do down the line." That's not how it's worked for me. There are certain people who try to outline their whole career. But for me, I've always gone by the rule that as long as I find the work interesting and that I feel that my curiosity is being met, I'm happy. It's not always about career trajectory. It's about feeling fulfilled. Do I feel that I'm learning something? Do I feel challenged? When those things start to wane, then I'm ready to get a new job.

What's your advice for other women working in male-dominated fields?

JP: I had training from some amazing people so that by the time I got to Google as a Director of Creative Content, I felt confident when I walked in a room and I was the only woman there. That's what I'd say to other women: You must feel confident in every room you walk into. Being around folks like Maria Shriver, I would know that when we would walk into a room, everybody would say, "Oh, she's Maria Shriver, she knows everything." But Maria would go, "I knew nothing about that. We're all going to fake it till we do, and then you'll get it and you do it." So it just shows you that everybody's making it up. You're not the only one.