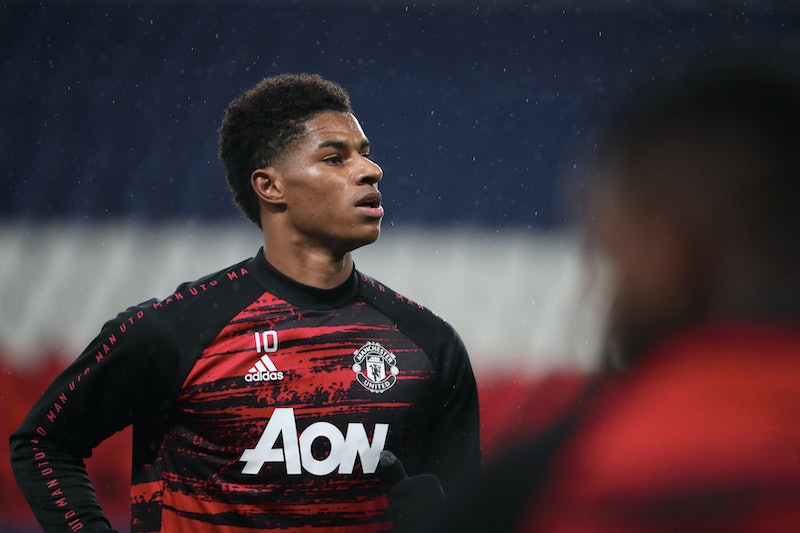 Local coffee shops, takeaways, and restaurants across the country are supporting Manchester United star Marcus Rashford's fight to end child food poverty in the UK. On Oct. 22, 322 UK politicians voted against Rashford's request to extend the free school meal vouchers scheme for struggling families until Easter 2021. Despite the result, the UK's small businesses were quick to respond offering up free meals to children in their areas. "This is the England I know," tweeted the footballer in response to the generosity.

Rashford, who was recently awarded an MBE for his continued efforts to end child hunger in the UK, said he was "blown away" by all the local businesses stepping up. His Twitter account is ablaze with retweets from business from Manchester to Hertfordshire, all of whom are getting stuck in with donations, packed lunches, and hot dinners.

He tweeted: "Blown away by news of local businesses stepping up to fill the voucher scheme deficit during the October half term. Selflessness, kindness, togetherness, this is the England I know Add #ENDCHILDFOODPOVERTY to your tweets so I can track them. I will share as many as I can."

"We're behind @MarcusRashford no parent should ever struggle to feed their children," tweeted Baker's Tea Room in Bolton. "Baker's are offering free grab bags for all children on free school meals during half term."

McDonald's has also offered their support, donating a million free meals for UK families, and over 1000 other nationwide and local cafes, restaurants, and shops have also offered free school meals for children during half term. An interactive map of all the organisations offering free school meals is being run by the team behind the Instagram account @all_of_us_tgthr.

A number of UK supermarkets have rallied to support Rashford’s campaign: Morrisons are supplying pre-packed bags of shopping which are then donated to food banks; Tesco recently announced it is going to donate two million meals a month to FareShare; and Sainsbury’s has donation points in its stores as well as an online donation point for FareShare.

The generosity has been momentous and the footballer has also seen backing from local councils, including the footballer's home Greater Manchester.

Manchester Mayor, Andy Burnham, tweeted that the city would be joining forces with the Co-op and Rashford to provide 1,000 food vouchers to young people who may need access to a meal during half term.

In 2019, it was reported that 1.3 million children receive free school meals and it's estimated 900,000 more have sought a free meal since lockdown, according to BBC News.

No. 10 has doubled down on their stance, saying they are "clear" on their position and declining to comment on the response from private businesses. Per the Independent, a No.10 spokesperson said: "I believe the PM said during PMQs that free school meals will continue during term time and that he wants to continue to support families throughout the crisis so they have cash available to feed kids if they need to."

Rashford has been open about needing free school meals and food banks growing up in Wythenshawe, Manchester, and will be given a Pride of Britain Special Recognition award for his tireless campaigning to stop children going hungry.

"When we stumble, there will always be a community to pick us up. For many that’s a foodbank," he said to Manchester Evening News. "The real superstars in this country can be found in the heart of most cities, towns, and villages, working tirelessly to support our most vulnerable across the UK."