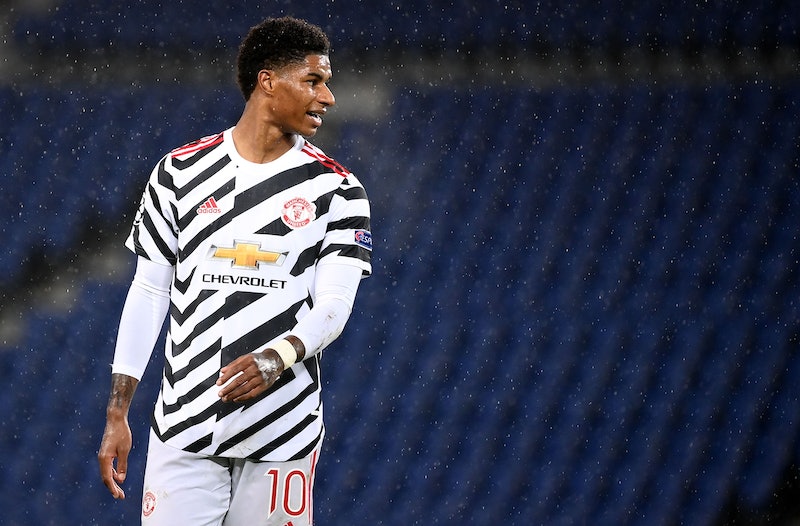 Scoring winning goals by night and taking on MPs by day seems to be Marcus Rashford’s M.O. in recent weeks. Fresh from securing his team's victory against Paris Saint-Germain on Tuesday evening, the footballer and campaigner took on the UK government once again on Wednesday, penning a thoughtful note on Twitter to express his sadness that his plea for free meals to be extended to school holidays was voted down in the House of Commons.

For those who haven't been following Rashford's campaign, the basic timeline is as follows: back in June, the sportsman was successful in securing a U-turn from the government on their decision to stop free meal vouchers for school children during the school holidays. On October 15, Rashford launched an online petition to extend the free school meal scheme to more children.

The petition had three main goals: To expand free school meals to all under-16s where a parent or guardian is in receipt of Universal Credit or equivalent benefit; to provide meals and activities during all holidays; to increase the value of Healthy Start vouchers to at least £4.25 per week, and to expand the scheme.

However, the government was quick to respond and reject the campaign, saying that it took the “decision to extend free school meals during the pandemic, when schools were partially closed during lockdown” but that we are in a “different position now.” A Downing Street spokesman said: “It’s not for schools to regularly provide food to pupils during the school holidays.”

On Monday (Oct 19.), Labour warned Prime Minister Boris Johnson he had 72 hours to agree to Rashford's pleas for an extension of free school meals over the holidays or it would try to force a vote by MPs on the issue, per the Independent.

It was decided that MPs would vote on the issue and, in the lead up to it, the Manchester United and England forward took to Twitter to say that he was “paying close attention” to the vote “to those who are willing to turn a blind eye to the needs of our most vulnerable children.”

On Oct. 21, the motion was denied by 322 votes to 261. Five Conservative MPs rebelled against their party and voted to extend the scheme, and Caroline Ansel resigned her post following the decision.

Responding to the news, Rashford wrote: “Put aside all the noise, the digs, the party politics, and let’s focus on the reality. A significant number of children are going to bed tonight not only hungry but feeling like they do not matter because of comments that have been made today.”

“We must stop stigmatising, judging and pointing fingers. Our views are being clouded by political affiliation. This is not politics, this is humanity…”

Rashford, who has spoken of his own experience of food poverty growing up in Wythenshawe, Manchester, added: “I don’t have the education of a politician, many on Twitter have made that clear today, but I have a social education having lived through this and having spent time with the families and children most affected. These children matter.”

Rashford reinforced his unwavering commitment to the campaign, and added: “These children matter. These children are the future of this country. They are not just another statistic. And for as long as they don’t have a voice, they will have mine. You have my word on that.”