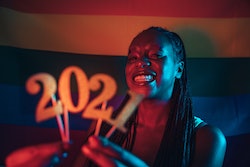 Humans are a superstitious bunch. From knocking on wood to throwing salt over your shoulder, you've likely engaged in a few seemingly odd activities to ensure good fortune. If you want to manifest prosperity in 2021, these uncommon New Year's traditions to try for good luck can help you put your best foot forward as you leave the dark and twisty vibes of 2020 in the rearview. Growing up, my mom always made me and my brothers eat a spoonful of sauerkraut on New Year's Day so we would have good luck in the coming year. No one left the dinner table without ingesting the dreaded kraut, which has its roots in German New Year's traditions and is said to bring blessings and wealth.

Other New Year's traditions include everything from stuffing your mouth full of grapes to wearing red underwear. After the dumpster fire of 2020, I think we need all the help we can get. If you really want to stack the deck in your favor for 2021, consider trying as many of these New Year's traditions as you can. If nothing else, dancing around in a bear costume will provide you with epic Instagram worthy snaps.

Wearing red underwear on New Year's Eve is common in lots of countries, including Spain and Italy. It's said to bring good luck — if, of course, the undergarment was given to you by someone else.

Making sure you have a mouthful of grapes at midnight is a New Year's tradition that originated in Spain, according to Food Republic. "Rare is the Spaniard who will risk poisoning their fate for the coming year by skipping the grapes, one for each stroke of midnight." Eating 12 grapes at midnight is thought to ensure 12 lucky months in the coming year. If only we had known about this one for 2020.

OK, don't try this one at home. In Scotland, New Year's is celebrated with a three-day festival called Hogmanay. The festival begins with tens of thousands of people marching through the streets of Edinburgh swinging torches of fire, according to the Telegraph. The tradition dates back to the Vikings, which the website Rampant Scotland reported is "believed to be linked to the Winter Solstice of late December with the fireballs signifying the power of the sun, to purify the world by consuming evil spirits."

4. Taking Your Suitcase For A Walk

If you want to increase your chances of keeping your 2021 New Year's resolution to travel more (pending the pandemic, of course), grab your empty suitcase and take it for a walk around the block. "If you plan to travel in the coming year, you are supposed to run around the block with a suitcase at midnight to enjoy success during your travels," the website Life In Ecuador noted. Bonus points if you do this while also wearing red underwear with a mouth full of grapes. If the weather outside is too frightful to run around the block with your suitcase, in Columbia people charge around the house with their suitcases, so you can do this instead, especially if you're wearing nothing but red underwear.

You've likely heard of this one as it takes place in cities all over the world. Basically, this tradition is just running into frigid water on New Year's Day, usually for charity, because giving back is a good way to start off the New Year. If you want to give this a try, here's a little incentive to take the plunge: Cold water is actually really good for you, and can make your skin and hair look fab. Plus, if you're hungover from New Year's Eve, the ice cold water will likely take care of that.

According to ABC News 7 in Los Angeles, people in Denmark jump off of chairs at midnight to ensure their feet are in the air going into the new year. This is thought to leave any bad mojo behind by making sure their feet are firmly planted on the ground when they land in the next year. This one should probably only be attempted by sober people.

If you've got some rage leftover from 2020 as you enter the New Year, then this one is for you. According to ABC News 7, in Greece, people hurl pomegranates on the ground at the stroke of midnight. The more pieces the fruit bursts into the more abundance you can expect in the coming year.

In Romania, dressing up in bear costumes, and dancing from house to house, is a tradition meant to keep evil at bay, according to the Telegraph. However, unless they're in on the plan, showing up at your neighbor's house dressed like a bear probably won't end well for you, so maybe stay indoors with your fur suit.

If you're moving, and your furniture fits through your window, throw away. My aunt told me that she once had a couch so big they didn't know how to get it out of the apartment so they chopped it up and threw it out the window. She was unknowingly participating in a South African and Italian New Year's tradition meant to start the new year off fresh.

If you didn't get your fill of fright on Halloween, you can participate in this Chilean tradition of camping in graveyards on New Year's Eve so you can start off the new year with your deceased friends and family, according to the Telegraph. Maybe you should wear your bear suit on this camping trip so you can stay warm, and scare away any uninvited spirits.

11. Dropping Ice Cream On The Floor

We all deserve ice cream just for surviving 2020. While you're scooping a bowl for yourself, pour one out for good luck. According to Mental Floss, in Switzerland people drop a scoop of ice cream on the floor at midnight to manifest abundance in the coming year. Makes sense because many good things come in the form of ice cream.

In Bolivia, Greece, and other countries, it's considered good luck to bake coins into desserts to celebrate New Year's, according to Mental Floss. If you try this out, you may want to use a little caution to avoid breaking a tooth on your hidden coins. A dental emergency definitely isn't the luckiest way to start out the new year.

All the single ladies put your hands up or... simply place some mistletoe under your pillow. It's said that in Ireland if an unmarried woman places mistletoe under her pillow before bed she will be blessed with good fortune and love in the new year.

More like this
10 Stranger Things-Inspired Halloween Costumes For True Fans
By Emma Carey
6 'Game Of Thrones' Halloween Costumes That Aren't Overdone
By Nina Kahn
26 Ghost Story Podcasts To Get You Ready For Halloween
By Jessica Booth, Mia Mercado, JR Thorpe and Emma Carey
15 Easy Pranks To Play This Halloween
By Emily Kelley and Lauren Grant
Get Even More From Bustle — Sign Up For The Newsletter

This article was originally published on Dec. 30, 2017