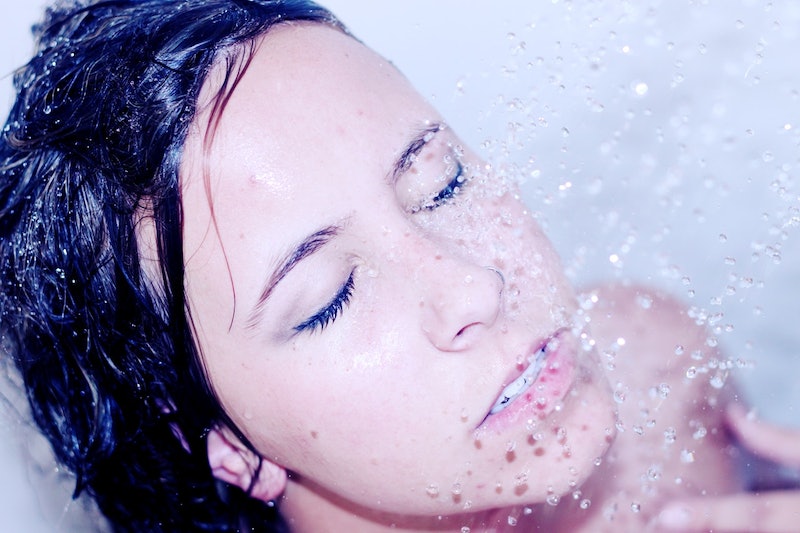 If you've ever wondered how Karen Walker on Will & Grace makes it to work every day, there's an episode where she admits she starts her day with Rosario dousing her with cold water. While unpleasant, research shows that taking cold showers could make you miss less work, and it might even improve your mental health. If you've ever taken a cold shower then you know it can be kind of awful unless it's 100 degrees outside. Who would do this on purpose?

A study conducted in the Netherlands, and published in the journal PLoS One, recruited some daredevils willing to submit themselves to this torture to find out whether cold showers improved overall health. While the poor souls in the study who were subjected to cold showers didn't get sick any less than their warm-shower counterparts, they did take an average of 29 percent fewer sick days. And, people who also exercised during the cold-shower trial miss work 56 percent less than their sedentary hot-shower peers.

If you live in a cold climate, like the Netherlands, sticking a pen in your eye might be preferable to taking a cold shower, but, like everything else, your body gets used to it over time. When I lived in Maine, which is cold AF most of the time, I had to wait a few days for my gas to be turned on, and I had zero hot water. I was also starting a new job so not showering was not an option. I took cold showers for three days, and while I dreaded it like the dentist, I did feel more awake.

Why It's Cool To Be Cold

If you think this logic sounds bananas, consider the rising popularity of cryotherapy, a misery similar to cold showering where you can pay your hard-earned money to spend three minutes in an icy stall that's colder than the North Pole. Why are people embracing the cold life? "One, the reason professional athletes do it all the time after a workout is it increases recovery," former Navy SEAL Clint Emerson explains in a video on Business Insider. "It vasoconstricts the entire body, squeezing out all of that lactic acid so that you can feel good to go the next day and be ready for the next day training."

More and more athletes are turning to cold showers and cryotherapy for pain relief and accelerated injury recovery. I even tried cryotherapy for a back spasm that was so bad I could barely stand upright. Because I was flying to Iceland the next day, being able to stand up was kind of important. I felt 50 percent better after just three minutes in the cryo chamber. According to the Emerson, extreme cold works as a kind of healing therapy. "Even though it was torture, it’s therapy so that it keeps you healthy, keeps your joints and inflammation down, vasoconstricts everything down and allows you to keep moving forward, hopefully without any more injury."

So, how does this apply to you deciding whether or not to go to work when you feel like barf? According to Medical Daily, starting your day with a cold shower can give you a jolt of energy similar to drinking a lot of coffee, but without the jittery side effects. When the icy water hits your skin, "the deep breathing in response to our body’s shock helps us keep warm, as it’s increases our overall oxygen intake," Lizette Borreli wrote for Medical Daily. "Thus, our heart rate will also increase, releasing a rush of blood through our entire body. This gives us a natural dose of energy for the day."

Is Cold Showering The Secret To Everything?

Aside from waking you up, cold showers can also ease depression, and participants in the Netherlands study reported an increased quality of life. Medical Daily reported that starting your day with a cold shower also alleviates stress, is good for your skin and hair, improves circulation, and helps relieve muscle soreness.

Reddit user Socialed experimented taking cold showers for 100 days and reported myriad positive effects, including increased tolerance for cold and better performance at work. "[I've had] increased energy and focus since first shower, [the] first 2-3 weeks my skin was shedding after every shower. It stopped, and since then I've never had smoother, stronger skin," wrote Socialed, who also likened cold showering to a meditative experience.

Another Reddit user, CaptainInsaneO007 reported increased mental wellness after switching to cold showers. "I was able to get off my anxiety medication and have felt way less edgy through the day. Much more clear-headed and flow with conversations." Others reported better sleep, being more relaxed, feeling more alive, and less dependance on coffee and energy drinks to get through the day.

The bottom line? If you're struggling to get out the door in the morning and dragging yourself through the day, ditching your hot-shower routine for an ice-cold shower might help turn things around. And, the bonus is that your hair and skin will look remarkably better, all without an expensive trip to the spa. Who knew the answer to being better at everything is free and has been hiding in plain sight in your bathroom all along? This is one life hack I'm definitely going to try ASAP.