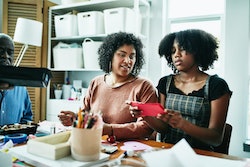 With Valentine’s Day fast approaching, you’re probably trying to figure out what festivities to get into with your loved ones. Well, they say knowledge is power and that love makes the world go round, so why not a round of Valentine’s Day trivia at your next Zoom party? Everyone knows that Valentine’s Day is the most romantic day of the year, but do you know how it truly came to be? Hint: the history is nowhere near as romantic as the actual day.

Truth is, Valentine’s Day has an interesting and obscure history. From ancient Roman fertility festivals to a billion-dollar corporate industry, the love-filled holiday has played a significant part in everyone’s lives at some point. If you plan on hosting a Zoom party for Valentine's Day this year, you may want to throw in some of these trivia questions that will really wow your guests and put them in the lovey-dovey mood for knowledge.

More like this
Dunkin’s Valentine’s Day Lineup Includes A Drink That Tastes Like Dessert
By Alexis Morillo
23 Super Sweet Things To Write In A Valentine's Day Card
By Karen Belz and Lexi Inks
21 Galentine’s Day Memes To Celebrate Your Best Friends
By Meghan Bassett and Mia Mercado
12 Aphrodisiac Desserts To Spice Up Your Valentine’s Day
By Kaitlyn Wylde
Get Even More From Bustle — Sign Up For The Newsletter
From hair trends to relationship advice, our daily newsletter has everything you need to sound like a person who’s on TikTok, even if you aren’t.

This article was originally published on Jan. 27, 2021