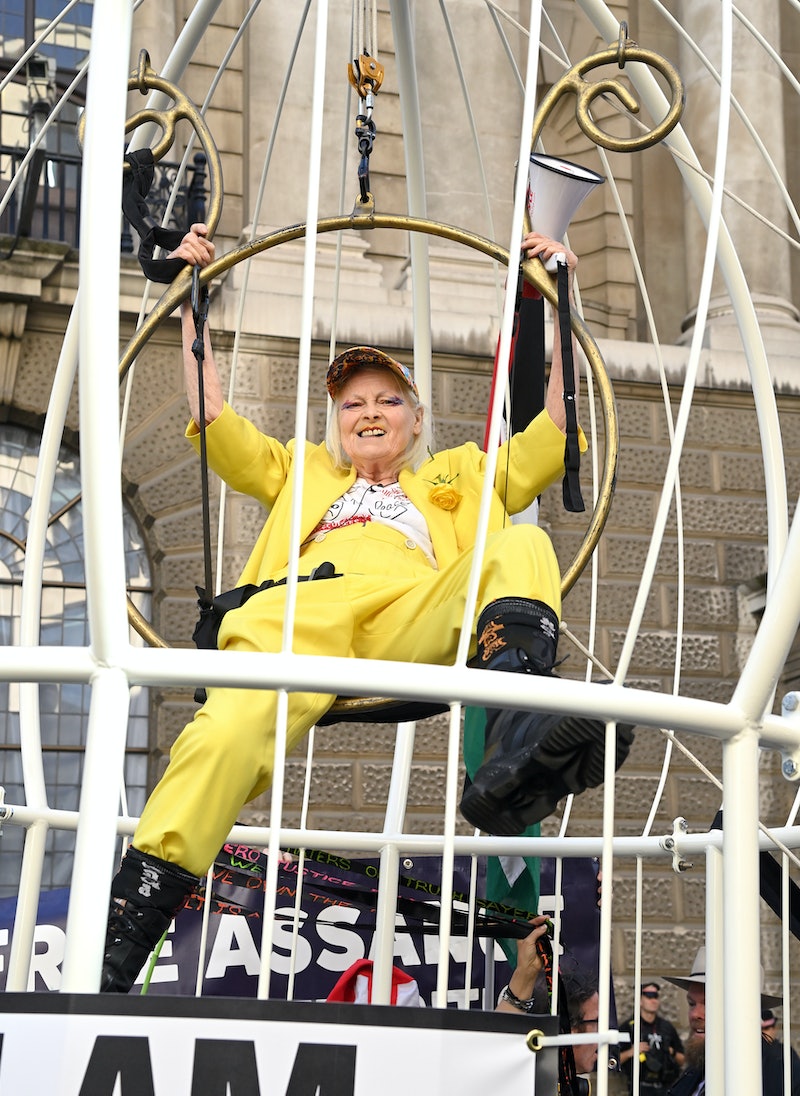 Dame Vivienne Westwood, the fashion designer known for punk style and political stunts, suspended herself in a birdcage, outside London's Old Bailey this morning. In what initially looked like a David Blaine-esque escapade, the 79-year-old – dressed in a bright yellow suit, baseball cap and black boots – was hoisted into the air and handed a megaphone, as reporters and passers-by looked on. Asking the crowd to "be quiet please", she began a monologue explaining that she was there in protest and support of Julian Assange, the Wikileaks founder and editor, whose extradition hearings are set to start up again this September.

According to Westwood, the set up was staged to represent a caged canary, which she used as a metaphor for Assange's case. Canaries were commonly used to give an early-warning signal for poisonous gases like carbon monoxide in mines in the 1900s – a situation Westwood equated to the Wikileaks founder's entrapment. Stepping outside to speak to Good Morning Britain, Westwood explained: “I am Julian Assange, I am the canary in the cage. He has been trapped by a big net, taken out of the sun and shoved in a cage.” She went on to say, “this could happen to every journalist, because it’s not a crime to publish the truth.”

Who is Julian Assange & why is he being extradited?

Julian Assange is an Australian journalist who founded the website WikiLeaks in 2006. Wikileaks published confidential government documents and images, bringing the information to public attention. In April 2010, the site leaked confidential US files, some of which showed footage of US soldiers in Iraq shooting and killing civilians from a helicopter.

Later the same year, Sweden issued an international arrest warrant for Assange, following sexual assault allegations made against him – he was detained in the UK, and then bailed. A long, legal battle ensued, and Assange chose to seek asylum in the Ecuadorean embassy in London – where he remained, without stepping foot outside, for seven years. Assange always maintained he made this decision to avoid being extradited from Sweden to the US, where he feared being put on trial for releasing secret US documents.

Assange was eventually arrested by British police on April 11, 2019, after Ecuador took "a sovereign decision" to withdraw his asylum status. While the sexual assault allegations have since been dropped by Swedish prosecutors, the US filed 17 new charges against Assange for violating the Espionage Act; Wikileaks said the charges are "madness" and "the end of national security journalism". Assange is now being held in Belmarsh Prison in London, while the legal fight to avoid extradition continues.