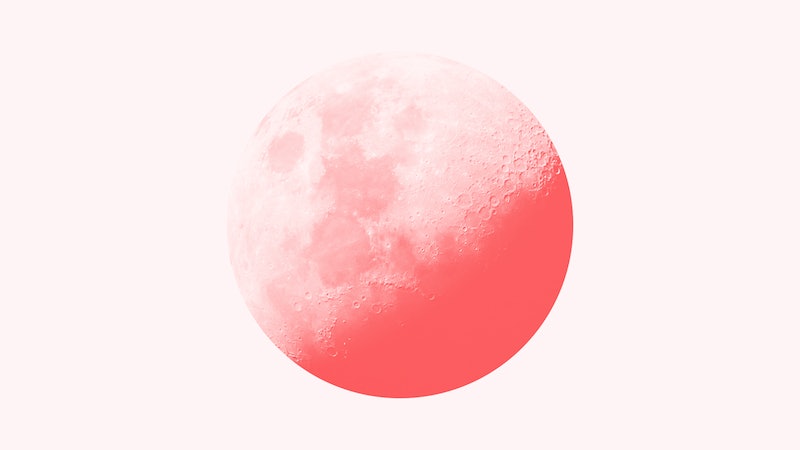 If you dabble in studying astrology or even just read your horoscope regularly, then you know the moon in astrology is a huge part of the daily cosmic scene — it rules over our emotions and feelings, our instincts and vulnerabilities, and the ways we feel safe and nurtured. As the moon moves through each of the 12 zodiac signs during its approximately 28-day cycle, it takes on the energy of each of those signs and can color our moods with the signs' qualities. Somewhere within your astro-dabbles, you may have seen the term "void-of-course" moon being mentioned, although its meaning can sometimes get a little convoluted. But knowing what a void-of-course moon means in astrology can actually be super helpful — and while you may not be able to define it just yet, I can guarantee you've felt its effects.

In simple terms, the void-of-course moon (sometimes just called the void moon, or abbreviated as VC or v/c) describes a period of time before the moon moves into a new sign during which it doesn't form any significant meet-ups with any of the other planets. It's sort of a planetary siesta for la luna, or a period of respite between all the moon-ruled intensity that usually comes along with the planet's travels through the zodiac. In a brain fog? Feeling totally unproductive? In need of a nap even though you already got a full night's sleep? Well, you might just be able to blame the void-of-course moon for your troubles.

What Does It Mean When The Moon Is Void-Of-Course?

The moon spends a little more than two days at a time in each of the 12 zodiac signs as it travels through the zodiac wheel (it completes its rotation through all 12 signs in about 28 days, which is a full moon cycle). As the moon moves through the zodiac, it forms planetary aspects with the other major planets rather frequently. Aspects are actually just angles in an astrology chart that are formed between two or more planets, and these angles represent different types of relationships. There are "hard aspects," which can result in challenges and tensions between the planets' combined energies, as well as "soft aspects" which are easier and more harmonious. Because the moon moves so quickly through the signs (it's the fastest moving of all the planets in astrology), it's constantly forming aspects with other planets, which ignites its power and subsequently affects our moods, our emotions, our energy levels, and more. But once the moon has completed the final aspect to another planet within a certain sign's realm, it's considered void-of-course until it enters the next sign. This marks a period of time when the moon is totally on her own, floating through the zodiac without any influence from any of the other planets that are usually there to bounce their energy off her. And that's why when the moon is void-of-course, we tend to feel a little lost, hazy, and scatterbrained ourselves.

Usually, because of how often the moon forms aspects to planets, the moon doesn't end up void-of-course until it's reached the very last degrees of a sign (if it even voids at all) — meaning the void moon will only last for a few hours or less at a time. But occasionally the stars align so that we have a whole day under the influence of the void-of-course moon. This makes for a slightly dizzying period that's not necessarily productive, but a good time to lean into your imagination, make time for solitude, and reflect on your own feelings and emotions. If you have an astrological calendar, look for the symbol VC or v/c to indicate periods when the moon is void-of-course — that way you can take a break from blaming Mercury retrograde for your mix-ups and shake your fist at the void moon instead.

How Does The Void Moon Affect Us?

As mentioned, the void-of-course moon is the moon flying solo for a short stint — during this time, the moon lacks support from the other planets in astrology that it is usually in contact with, making us feel a little hazier and less grounded than usual. The plans we make under the void moon aren't very likely to materialize, and our decision-making skills won't be at their finest, either, as we won't have a firm grip on reality and won't be doing things very efficiently. This can be frustrating, as it can feel like we just can't get anywhere while the moon is void — we'll often ended up wasting time and energy trying to do something that we'll inevitably have to correct or re-do later. According to astrologer Pam Ciampi in Llewellyn's 2020 Daily Planetary Guide, the void-of-course moon is defined as "nothing will come of this," which speaks to the way it hinders us from getting things done effectively. The moon doesn't have retrograde periods like some of the other planets do, but some astrologers liken the energy of the void-of-course moon to that of a retrograde due to the way its energy slows us down and mixes things up.

But just because a void-of-course moon lacks planetary support doesn't mean it's a lost puppy, roaming the streets without its guardian. You can also think of the void moon in a more liberated sense — like it's free of the influence of all the other planets. During the void-of-course moon, pamper the moon-ruled sides of yourself. Up the self-care, prioritize introspective time alone, and take time out to process what's happening in your life at the moment. The void moon can actually be a nice calm respite between planetary dramas that allows you to get in touch with your emotions and your imagination in a rejuvenating and restful way.

If you want to make the most of occasional void-of-course moon and align yourself with its dreamy vibes, here are some things to keep in mind:

Stick To Your Routine

When the moon is void-of-course, it can be challenging to start new things or focus on anything that requires a lot of concentration, as this period can make us feel low-energy and much less clear on the details. Of course, most of us don't have the luxury of taking the day off to sleep in every time the moon voids, so the best thing to do is to just stick to your routine and not stray from the ordinary. Going with the tried-and-true options instead of getting experimental and adhering to your usual schedule can help to ensure that things run more smoothly, offering some stability when the lunar energy is so ungrounded.

The void-of-course moon is undoubtedly a sleepy time, as it pushes us into our daydreams and encourages our imaginations to run wild instead of our conscious, analytical minds. Because these periods are an ideal moment for self-reflection and introspection, it's a great time to clear your schedule (if possible) and make some extra time for resting and pampering yourself. Pencil in some solo time to journal, take a long bath, or just lay in bed and doze off, allowing your mind to wander. The moon is all about emotions, so lean into your feelings and intuition and give your rational brain a rest. Now's the time to listen to your heart without judgment.

Remember what we said about the void-of-course moon meaning that "nothing will come of this"? Well, keep this in mind when the moon is void — as it's not a good time to sign contracts, finalize agreements, start new endeavors, or make any major decisions. The void moon totally skews our ability to see things clearly — our expectations can be unrealistic, we could be missing vital information without realizing it, or we could just totally space out and overlook something that really should have been considered. On top of it, anything that begins under the void-of-course moon just isn't built to last, so save your new beginnings and fresh starts for another day.

Take Advantage Of The Cosmic Loophole

Making major decisions or taking the first steps toward something important under a void moon isn't usually encourated — but the wavy, ethereal energy of the void moon can actually be worked in your favor, if you play it right. "This is the time period when the universe seems to be most open to loopholes," wrote Ciampi in Llewellyn's 2020 Daily Planetary Guide. "It's a great time to make plans you don't want to fulfill or schedule things you don't want to do." For example, if you need to have a tough conversation with someone but don't want to deal with aftershocks of repercussions, try to initiate it under the void moon, where its effects won't be as long-lasting. If there's something you need to do that you're unsure about or don't want to, now's a good time to schedule it without much effectiveness, too. The nature of the void moon can actually be a good thing if you know how to use it to your advantage.

More like this
The Best Self-Care Strategy For Your Zodiac Sign
By Marilyn La Jeunesse
Here’s Your Horoscope For Thanksgiving Weekend
By Mecca Woods
Here's Your Horoscope For December 2022
By Alexandria Lettman
Emily Ratajkowski & Pete Davidson's Astrological Compatibility, Revealed
By Nina Kahn
Get Even More From Bustle — Sign Up For The Newsletter