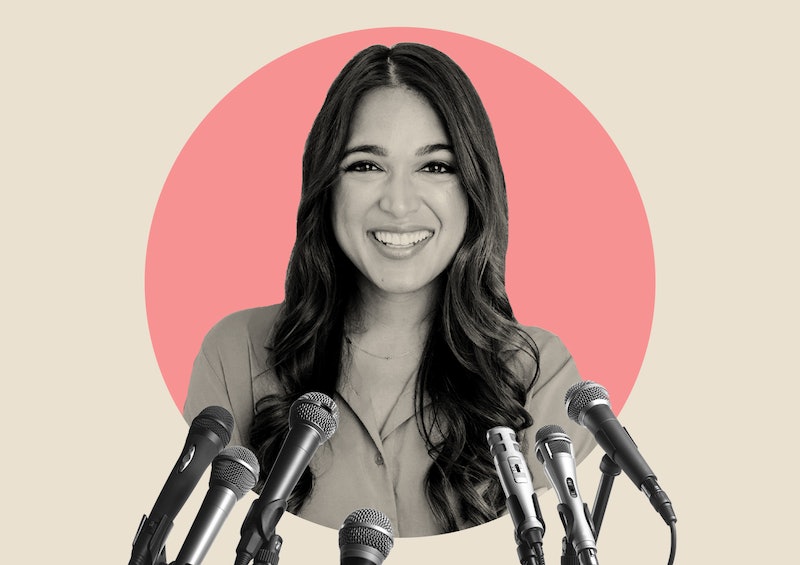 In Bustle’s Quick Question, we ask leaders all about advice — from the best guidance they’ve ever gotten to what they’re still figuring out. Here, Vrinda Gupta, founder and CEO of Sequin, tells Bustle what it’s like to be in a male-dominated field, how she gets pumped up for big meetings, and why she believes every woman has a billion dollar idea.

After spending six years as a product manager for many of Visa’s most popular credit cards, Vrinda Gupta applied for the company’s Chase Sapphire Reserve — and got denied. “There I was, new to the workforce, ready to get this credit card, ready to be on my path to financial freedom, but I just lacked credit history,” the 30-year-old tells Bustle. “Even though I had a great income and was financially responsible, I still got rejected from the card I built.’

It was in that moment Gupta pinpointed a major flaw in the way credit works. “I looked at Visa data and I saw that 70% of young women were spending like I had been: On debit cards or on credit cards that were in other people’s names, which means they weren’t building their own credit,” she says.

Gupta also realized that, even though women are historically better to lend to than men, credit cards are still designed to benefit the way men spend money, putting women at a further disadvantage. “Women are not getting fair access to credit, which is very directly related to access to opportunity,” she says. To help smooth this gender inequity, Gupta founded Sequin —the first debit card that builds credit for women — in 2019.

Unlike traditional debit cards, which do not build credit, Sequin fronts the money for purchases so you can go about your day spending as you normally would. In the background, Sequin repays themselves automatically, reports repayment history to credit bureaus — and voilà, you build credit. Here, Gupta shares her goals as a CEO, her favorite way to unwind, as well as who she calls every day for advice.

What was the process of building your own credit card like?

After I was denied for a credit card, I went to Berkeley Haas School of Business and got my MBA and became an entrepreneur, and then started Sequin during a summer internship.

I truly believe the world needs more product services designed by women and for women. There’s so much opportunity. In fact, every single woman, just because of her experience, has a billion dollar idea because most products and services really aren’t designed with you in mind.

If you’re using a product and you’re like, “Hey, this isn’t really working that well for me” it’s probably not you. It’s probably the way it was made, which means you have an opportunity to make a better product for yourself and for other women. That’s really exciting!

That is awesome. Is there anyone in particular you’ve turned to for advice while launching Sequin?

She’s amazing. She rebuilt a life for herself and our family, in America. She’s an educator and so aspirational. But her one fear has always been the financial system. She’s always kind of relied on my dad because she didn’t feel very confident in the realm of finances, so when I started working at Visa, it was a lot more to me than just a job. It was something I always felt was important: To be financially independent and to understand the system, because that was something my mom always encouraged.

On those days when I’m like “entrepreneurship is really hard” — and there are a lot of those days — I always call my mom and she says, “I feel so much more empowered in financial services because of the work that you’re doing and it’s important. Keep going.” In those low moments, talking to my mom is what keeps me going.

I love that. Where else do you source inspiration?

I get really inspired by women entrepreneurs who are breaking all types of ceilings, especially recently. You see these unicorn companies founded by women who have amazing stories. Even just hearing the challenges that they had and them kind of being vulnerable about it is inspiring.

This is why representation matters. I hope to be that for the next generation of entrepreneurs as well. I hope a young woman sees me and says “Well she did it, I can do it too!” That’s the best part of being on this journey.

Is there anything you struggle with as the CEO of a company?

Startup founders are overwhelmingly men, non-people of color, and non-immigrants. Sometimes I go into meetings and I see a prototype of what an entrepreneur “should” look like.

But I’ve realized that’s actually my strength. My style of leadership has always been more collaborative and more about the collective whole. And that has translated into how I want to run business and how I come across.

I’m working to step into the fact that there is not only a different way to lead that is successful, but in many ways a more effective way to lead, and I’m trying to feel confident that some of these hetero-normatively feminine ways that I’ve chosen to lead my company, build my product, and co-design it alongside our community, is actually a strength even though it’s different.

What do you do to get ready for big meetings, particularly ones full of the prototype startup guys?

I listen to a pump-up playlist that I made that has all of these women who I love. There’s a lot of Beyoncé, Cardi B, Lizzo, and Rihanna. I listen and I’m like, “Yes! Preach!” That’s blasting in my ears before these meetings; songs from women who are unapologetically themselves. It gives me a lot strength. I hope to meet one of them one day and say, “Thank you, you were there when I needed you.”

How about winding down after a long work week? What do you do to relax?

My Friday night ritual is going to hip hop class. Entrepreneurs are always analyzing data and using insight to chart a brand new path, so it’s nice to take a break from thinking and know that someone else will tell me what to do for a bit. I like to focus on the choreography. It’s so fun and so care-free and very centering.

It sounds like you have a packed schedule. How do you prevent burnout?

Burnout happens when you forget why you started doing something, so if you begin to burn out, I think it really helps to come back to your why. For me, my “why” is the importance of financial freedom for women. When I was rejected from the card I felt as helpless as my mom has always felt in the system.

I also realized if I don’t do something, my daughter is going to be sitting at the same desk one day, and the same thing is going to happen to her.

Any final words of advice, especially for future entrepreneurs?

Taking a leap doesn’t mean you aren’t scared. When you’re doing something new, you have to get in there, do it anyway, and eventually the challenges you thought were scary yesterday become not-so-scary today. Slowly but surely you start to conquer, one step at a time.