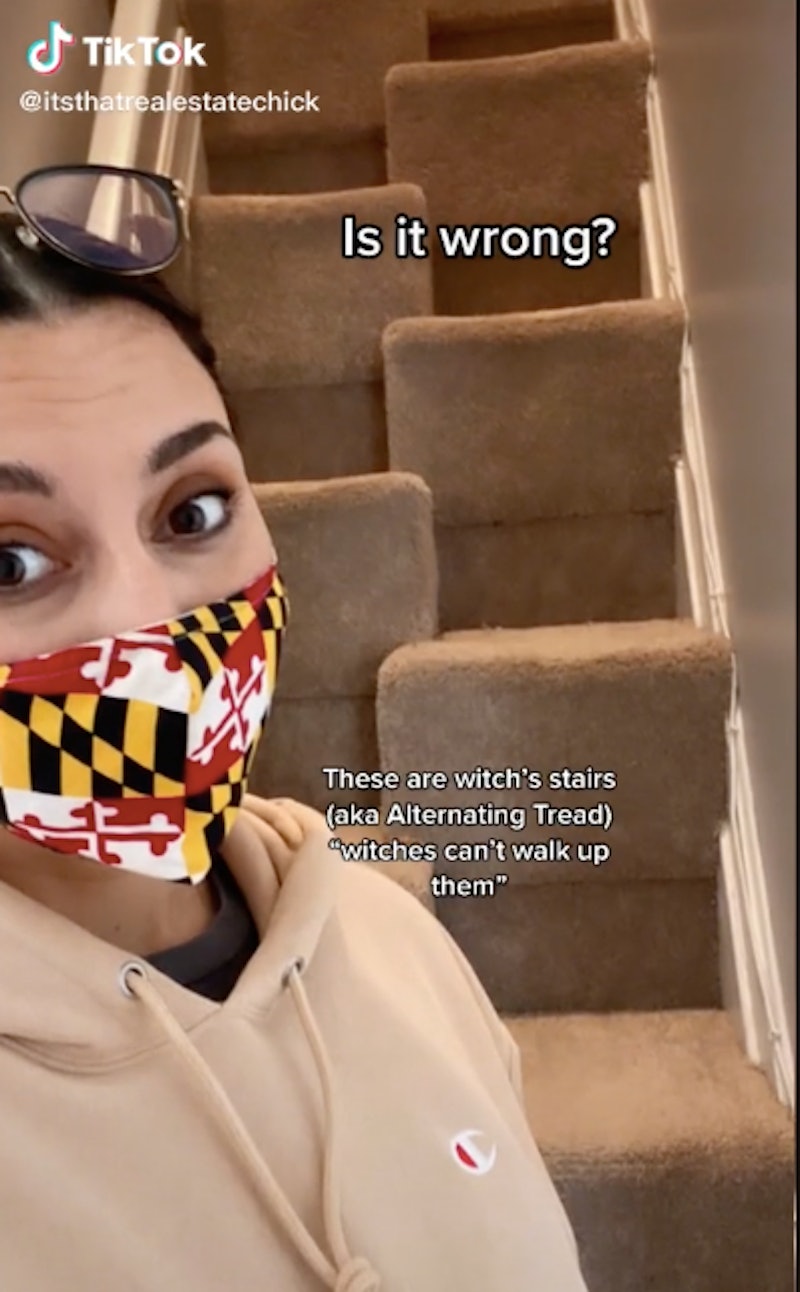 Once upon a time, the TikTok community was shook to their core after a video of “witches stairs” went viral on the app. If you’re not familiar with the term, no worries because over the years, these not-so-common stairs have definitely taken a backseat in terms of modern-day architecture. That’s why the people of social media were somewhat baffled when TikTok user @themistershade posted a video in March 2021 of carpeted witches stairs — which has now racked up 14.9 million views. “We thought about making an offer on this home until we saw these stairs,” the caption reads.

At first glance, the stairs give off an optical illusion because of how uneven the overall structure looks. Picture typical stair steps being split in half and then layered in a staggered pattern so the stairs take on a checkered form. The end result is a staircase that can a) save space in narrow homes and b) double as a workout on leg day. Plus, like traditional staircases, witches stairs come in all shapes and sizes to fit the homes that require more space saving.

So where did these stairs come from and why are they called “witches stairs” across the board? Can they be implemented into modern-day homes? Here’s everything you need to know about the viral staircase:

What Are “Witches Stairs”?

Witches stairs, or alternate-tread stairs, are intentionally uneven steps that make walking to the second story a bit different than if they were traditional steps. A trip to the comments section of the original video (above) and a scroll through widely circulated posts like this claim that these stairs originated in late 17th-century New England during the Salem witch trials, a period of hysteria in which women who fell under certain categories were accused of practicing witchcraft and subsequently executed.

The story goes that witches were not able to walk up these stairs, so residents in the area installed these staircases as a precaution. While there is no evidence to support that people actually believed this to be true, it has been made official by Reuters Fact Check that witches stairs and the rumors surrounding them are just that: rumors. In the March 9, 2021 article debunking the urban legend, religion and witchcraft historian Robin Briggs confirmed that among the “massive historical literature, nor the many manuscripts,” there has never been a mention of stairs to prevent witches.

In reality, alternate-tread stairs were built to maximize space in compact homes with their diagonally stacked make. If you just so happen to live in a smaller home, these stairs might be just the thing to ensure you have more room for activities. Just be wary of the leg work you’ll have to put in each time you walk up.

Oh and in case you, too, fell down the TikTok rabbit hole of witch-related content, allow me to introduce yet another New England concept: Witch windows. Not only are they common in New England, but they’re ideal for ensuring no witches make it through your windows without falling off their broom first. Plus, all the natural light. The more you know.