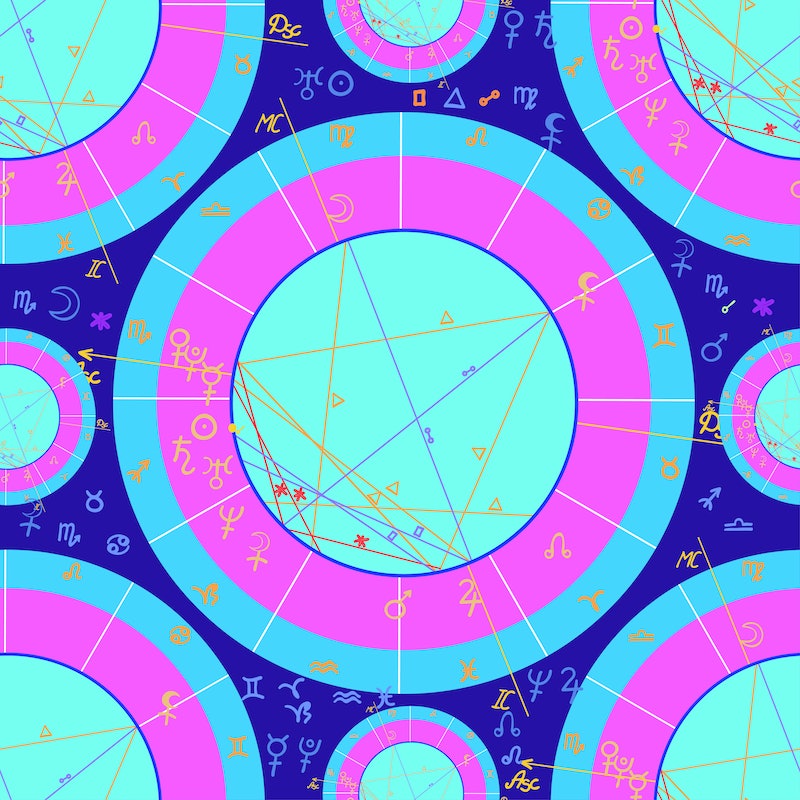 Astrology tracks the movement of and relationships between the planets and other celestial bodies and interprets how they influence us earth babies and our daily lives. If you're an avid astrology addict (or even just a casual horoscope reader), then you've almost certainly come across words like "trine" or "square" in the description of planets and how they're affecting us. These ever-changing relationships between planets in astrology are called aspects, and the five major planetary aspects are super important when it comes to understanding exactly how astrology affects us.

So, what are aspects in astrology? In short, they describe the angles that planets form to each other on the wheel of the zodiac as they move through the sky, and each of the angles means something different. While each planet in astrology has their own unique "personality" and governs over a different region of our life, the way they affect us has to do with what sign they're located in at any given time, as well as the relationships they're forming with each other. These relationships are known as aspects, and they're represented by the angles planets form with each other on the zodiac wheel. "There are five major aspects (trine, sextile, conjunction, opposition, and square)," astrologer Lisa Stardust tells Bustle. "Aspects are how the planets act when in different signs. They show how one gets things or takes action in life."

We can handle a little math for the sake of astrology, right? So here's the deal: If two or more planets are within 0° of each other on the zodiac wheel (or close to it), it's called a conjunction. If they're 60° apart, it's a sextile. Planets that are 90° apart form a square, and 120° apart form a trine. Lastly, two or more planets that are 180° apart (or directly across from each other in the zodiac wheel) form an opposition. Each of these angles have a different symbolic meaning, and you can also see these degrees visually represented on an astrological chart, like your birth chart.

Of the five major aspects, some are considered hard aspects, or angles that bring about more difficulty and struggle. Those are opposition and square. The easy aspects (sometimes known as soft aspects) are sextile and trine, and are considered to be gentler, and more positive and auspicious. A conjunction isn't generally aligned with either category, considering the strong potential for it to go in either direction depending on the planets involved. But remember, it all depends on the planets involved: You can certainly have a helpful square or a not-so-helpful trine. Each planetary meet-up will look a little bit different.

Aspects are essential when it comes to interpreting astrology, as they can totally change the influence and meaning of a planetary placement — so instead of just interpreting a single planet's meaning in a certain sign, we have to consider how they blend with other planets' energies. Are two compatible planets cozying up to one another in a harmonious conjunction? Or are they frustrating each other in a harsh-feeling square? For example, even though Venus is the planet of love and generally associated with positive qualities, if it's in difficult aspect with another planet, like Saturn for example, it could cause some upset in our love lives instead of bestowing us with its pure Venusian goodness.

While there are many different aspects that planets can find themselves in at any given time (not to mention so many more factors to consider with each aspect than could ever fit in a single article), these five biggies are a really good place to start.

"A conjunction is when two different planets link up together in the same sign," Stardust says. This hyper-focused aspect, which occurs when two planets are zero degrees apart, blends the qualities of the two (or more) planets and makes their combined energy in the particular sign they're sharing extra intense.

If the qualities of the planets involved work well together and get along with each other, it can be a great aspect, full of potential for high-energy and action. But if the planets don't get along so well or bring heavier, more challenging vibes, then being trapped in a small cosmic space together can cause some discord or amplify the dark feels.

This easy aspect is fun, full of good vibes, and undoubtedly positive. "A sextile is a friendly and flirty aspect between signs that are 60 degrees apart," Stardust says. "Usually they occur between fire and air signs, and earth and water signs." With a sextile, the sun is shining, the birds are chirping, and the situations at hand are happy ones. It's a nice break from the stress that other transits can bring and can offer us a nice opportunity to chill.

The only downside to the sextile aspect is that it's not the most action-oriented, so don't expect it to bring the energy for major shift. The energy of planets forming a sextile is usually easy and compatible, so it doesn't tend to bring much drama to a situation.

Trines, formed by a 120° angle on the chart, are generally considered the best and most auspicious aspect of them all, bringing luck, harmony, major synchronicity, and potential for positive changes. "The simplest way to understand a trine is understanding the elements. A trine occurs when planets in the same element (fire, earth, air, and water) aspect each other," Stardust says. When planets are working within the signs of the same element, they naturally get each other's motives, making their energy easier to work with.

"Trines are positive aspects that produce a positive outcome," continues Stardust. "The only issue is that they can be a little lazy in achieving their goals." The easy-like-Sunday-morning, good-vibes-only flow of a trine can sometimes result in our energy being a little too at ease — so the biggest mistake we can make with a trine is simply not taking enough initiative because we're too busy basking in the glow of the good vibes. Trines are to be taken advantage of, not slept on, so don't let these auspicious cosmic moments slip through your fingers!

Get ready for a lil' bit of cosmic drama, because just like the shape itself, a square aspect is chock-full of hard angles and sharp corners — so caution is advised. "A square is an intense aspect, which often dictates action," Stardust says. "Contrary to their reputation, squares are not necessarily bad. They just show that work will be involved in producing the favored outcome."

Considered one of the decidedly hard aspects at 90°, a square is bound to produce tension between the involved planets' energies. But a little tension can be helpful sometimes. This aspect simply illuminates a stressful situation that can be resolved with compromise and effort. By putting in the work and resisting the urge to be stubborn, the square aspect can be an opportunity to find a resolution to an issue — even if it's challenging to do so.

Lastly, let's talk oppositions, which — you guessed it — occur when planets are fully opposite each other on the zodiac wheel (angling at 180°). "An opposition occurs when two planets are in opposing signs, meaning they are found on opposite sides of the axis," explains Stardust. In an opposition, planets can find themselves butting heads.

With a whole zodiac wheel between two opposing planets, they're as far apart in the chart as can be — and because the two types of energy feel so distant and foreign to one another, this aspect can make it difficult for them to come together in harmony. Their wants, needs, and ideas may feel just as polar as their placement. That said, it's not all bad: Opposites attract, remember? So by seeking a balance between the planets' energies and trying to work symbiotically, there's potential for us to make an opposition run smoothly.

More like this
August’s Astrology Includes Uranus Retrograde & A Rare Taurus Conjunction
By Nina Kahn
Your Daily Horoscope For August 9, 2022
By Mecca Woods
The 4 Most Athletic Zodiac Signs
By Brittany Beringer
The 4 Most Forgiving Zodiac Signs
By Kristine Fellizar
Get Even More From Bustle — Sign Up For The Newsletter

This article was originally published on Jan. 26, 2019