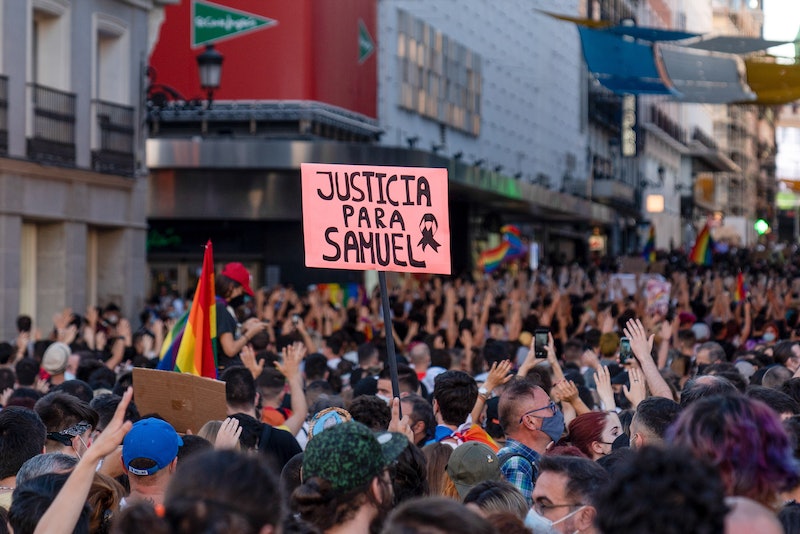 In the early hours of Saturday, July 3, 24-year-old nursing assistant Samuel Luiz was murdered outside of a nightclub in the Spanish city of A Coruña. As PinkNews reports, the killing occurred during the city’s LGBTQ+ Pride weekend and has sparked a wave of protests across Spain. Read on to learn more about the murder of Samuel Luiz and what you can do to support Spain’s LGBTQ+ community at this time.

What Happened To Samuel Luiz?

Per the Independent, Samuel Luiz was attacked on Saturday, July 3, during a night out with friends in the city of A Coruña. The attack took place following an argument with a stranger outside a nightclub that quickly escalated into a physical assault. Following the altercation, Luiz was left with injuries to his face. However, minutes later, the attacker returned with a group of 12 other people who proceeded to beat Luiz unconscious.

Prior to the initial attack, Luiz and his friend Lina had been FaceTiming another friend, named Vanessa. During the call, a man approached the pair and said, “Stop filming, you. I’ll kill you, f****t.” As PinkNews reports, the man became aggressive with Luiz before he had a chance to respond, and the pair’s friend Vanessa witnessed the stranger beat Luiz over the FaceTime video call. “The man punched him very hard and Luiz began to scream,” she recalled, adding, “I just listened to the blows and Lina shouted: ‘Leave him, he’s my friend, please leave him!'”

Lina has also shared her version of events. “I saw in the distance that a crowd of people were moving at high speed... When I arrived I found Samuel unconscious on the ground. [The attackers] were no longer there and had left him lying there,” she explained.

Luiz was taken to La Coruna University Hospital Complex where he later died from his injuries.

What Has Happened Since?

In the aftermath of the murder, local police launched an investigation into what happened by examining CCTV footage and questioning witnesses. A total of 13 suspects were later arrested, and, speaking on Twitter, Spain’s Equalities Minister Irene Montero said, “We must build among all of us a freer society in which we do not leave room for hatred.”

Elsewhere, Spanish Prime Minister Pedro Sánchez also condemned the murder and paid tribute to Luiz. “I’m confident that the police investigation will soon find those who murdered Samuel and shed light on what happened,” Sánchez tweeted on Monday, July 5. “It was a savage and merciless act. We will not take a step backwards when it comes to rights and freedoms and Spain will not tolerate this,” he added.

As the Independent reports, the killing of Luiz has sparked outrage across Spain, and multiple anti-homophobia demonstrations took place on Monday, July 5, in the cities of Barcelona, Valencia, Salamanca, Bilbao, Zaragoza, and Madrid, where there were several violent clashes between riot police and protesters.

Per the Guardian, Spain’s Policía Nacional announced on Tuesday, July 6, that three people had been arrested as “the alleged perpetrators of the violent assault that ended Samuel Luiz’s life.” In the official statement shared on social media, the police confirmed that the three suspects were aged between 20 and 25 and hail from the city of A Coruña where the attack took place. Further arrests have not been ruled out and the Spanish police also made clear that the investigation will remain open until all details surrounding the tragic death of Luiz have been clarified.

How To Support Luiz’s Loved Ones & Spain’s LGBTQ+ Community

According to the Spanish newspaper El País, Samuel’s father, Maz Luiz, called for attendees of the protests held in his son’s memory to donate food to the Red Cross. “I know that would have made my son happy,” he said.

During the protests, friends of Luiz wore T-shirts with the slogan “#JusticeForSamuel.” The slogan has since gone viral on social media around the world, and is being used by many to pay tribute to Luiz and condemn the homophobia that led to his death.

If you’d like to support anti-homophobia and pro-LGBTQ+ organisations in memory of Luiz, you can donate to Spain’s leading gay rights charity – Federación Estatal de Lesbianas, Gays, Transexuales y Bisexuales – here. Plus there are plenty of LGBTQ+ organisations to support here in the UK, too, including Stonewall, Switchboard, Mermaids, Galop, and many more.

More like this
What The UK Blocking Scotland’s Gender Recognition Bill Means
By Sam Ramsden
Gen Z Are Twice As Likely To Identify As Queer, According To New Data
By Sam Ramsden
Here’s What TikTok's "Mascara” Trend Is *Really* About
By El Hunt
Adam Lambert Called Out The George Michael Biopic Over Potential Casting
By Sam Ramsden
Get The Very Best Of Bustle/UK
Sign up for Bustle UK's twice-weekly newsletter, featuring the latest must-watch TV, moving personal stories, and expert advice on the hottest viral buys.