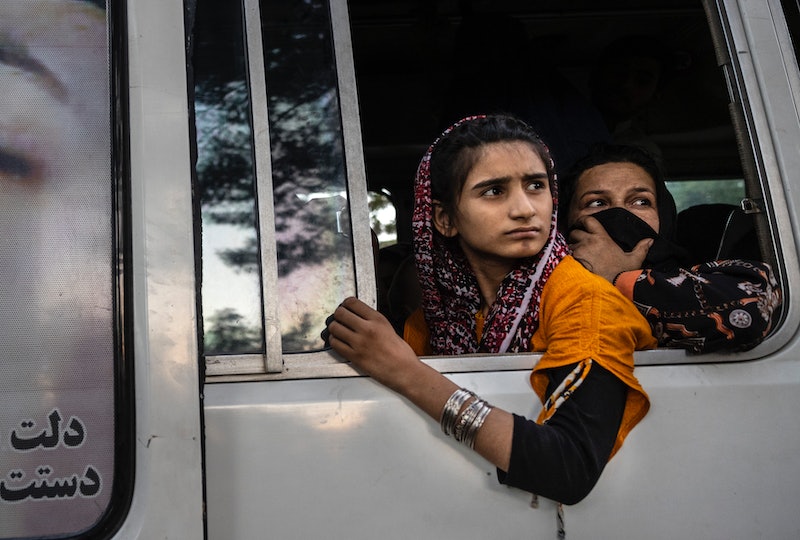 The Taliban emerged after a civil war fought in Afghanistan during the late 1990s. They seized control of the country in 1996, and ruled until 2001, placing Afghan nationals under strict Sharia law, resulting in the brutal oppression of women and minority communities.

Following the September 11 attacks on New York City in 2001, British and American troops were deployed to fight against the Taliban (who were reported to be sheltering Osama Bin Laden), removing the militant group from power.

By 2004, the Taliban had been significantly diminished; a new constitution had been put in place; and Hamid Karzai had become president. British and American military remained in the country to keep the Taliban at bay, fighting a resurgence of the militant group in 2015.

In February 2020, the U.S. signed an “agreement for bringing peace” to Afghanistan. This agreement (which has been criticised for sidelining the Afghan government) stated that the U.S. and its NATO allies, including Britain, would agree to withdraw their militaries within 14 months if the Taliban showed commitment to “a permanent and comprehensive ceasefire” and took steps “to prevent any group or individual, including al-Qa’ida, from using the soil of Afghanistan to threaten the security of the United States and its allies.”

On July 2, 2021, U.S. troops left Afghanistan, marking nearly two decades since their arrival. A few days later, on July 8, Britain followed suit, despite concerns that a civil war could break out.

Within a month, the Taliban took back control of Afghanistan almost entirely. On Aug. 15, they took over Kabul, and moved into the Presidential palace. Afghanistan is now bracing for a return to Taliban rule and, as a result, thousands of citizens are attempting to flee.

British and American troops have returned to the country temporarily to help ensure safe passage for UK and U.S. nationals living in Afghanistan, as well as Afghan Embassy staff and interpreters, via chartered flights from Kabul’s Hamid Karzai International Airport. However, Foreign Secretary Dominic Raab has been criticised for a delay in aid to UK nationals, due to the fact that he missed a phone call from his Afghanistan counterpart, Foreign Minister Hanif Atmar, two days before the Taliban secured Kabul. Raab, who was on holiday in Crete at the time, delegated the call to a junior minister, which was inevitably left unanswered.

The British government initiated the Afghan Citizens’ Resettlement Scheme on Aug. 18, which aims to resettle 20,000 Afghan refugees in the UK over a five-year period. The scheme will focus on women and children, as well as “religious and other minorities in greater danger from the Taliban,” per BBC News.

The scheme is facing criticism for not moving fast enough (it will only allow for 5,000 refugees to be resettled in the first year), including from some Conservative backbenchers. Pakistani women’s rights activist Malala Yousafzai told BBC Newsnight that Western countries need to move faster to “protect all those human and women’s rights activists” who are still in Afghanistan. Explaining that we need to “talk more about the solutions right now”, Yousafzai said she has been trying to reach out to global leaders who have “a role and responsibility” to “open their borders to Afghan refugees, to the displaced people.”

The situation has worsened rapidly since evaluations began, with reports that at least 20 people have died at Hamid Karzai International since Aug. 22, according to Reuters. On Aug. 23, there were reports that an Afghan soldier was killed during a gunfight at one of the airport’s gates.

In response to the ever-escalating situation, Prime Minister Boris Johnson held emergency talks with G7 leaders on Aug. 24. “It is vital that the international community works together to ensure safe evacuations, prevent a humanitarian crisis, and support the Afghan people to secure the gains of the last 20 years,” Johnson said.

Two days later, a terrorist attack killed more than 180 people, and left more than 150 injured at Abbey Gate near the Baron Hotel. A regional affiliate of the Islamic State group, IS-K, has since claimed responsibility for the attack.

13 American troops were also killed during the bombing, marking the first American casualties in Afghanistan since February 2020. On Aug. 30, documents from the Pentagon were leaked to Politico, which reportedly suggested that the gate where the blast took place was left open longer because “the UK wanted to move its personnel to the airport from the Baron Hotel.”

In response, the UK chair of the Defence Committee, Tobias Ellwood criticised the alleged claim. “If the scale of this attack was known beforehand, all gates should have been closed as a matter of protocol and they weren’t,” he told the Telegraph. “Which suggests either detailed intelligence was missing or huge risks were chosen to be taken anyway.”

British troops left Afghanistan on Aug. 28, followed by the American military on Aug. 31. This is despite a U.S. airstrike that took place on Aug. 29, which reportedly killed a civilian family, including six children and a charity worker. According to the Independent, a senior U.S. official said the strike was aimed at a vehicle between two buildings after “individuals were seen loading explosives into the boot.” The U.S. military has acknowledged the reports of the deaths, and is said to be investigating further.

A return to Taliban rule is especially concerning for women in the country as, under the former regime, women and girls were not allowed to attend school or work outside the home, and were unable to appear in public without full-body coverings and male escorts, as NBC News reports. Those who didn’t follow these rules were publicly flogged or executed.

Despite the Taliban saying that they would write laws to enable “women to contribute to the country in a peaceful and protected environment,” the feeling on the ground is one of fear.

There are a number of charities trying to offer help to those caught up in this conflict, providing food, shelter, and the necessities needed to flee from the now Taliban-controlled country.

You can also share your support on social media. The IRC has published a infographic that you can save and post to raise awareness about the issue. You could also write to or email your local MP demanding they take action and raise the issue in the House of Commons. Advice on how to do that can be found here.

Charities and organisations you can donate to include:

They’ve been responding to Afghanistan since 1988, and recently launched a $10 million appeal to raise funds to help their teams provide aid in areas of conflict.

Over 80,000 children have been displaced in the past two months due to the ongoing conflict, which they describe as “among the worst conflict-affected countries to be a child.” The charity has managed to reach over 602,000 children through donations.

Their teams are on the ground by distributing emergency food parcels, blankets, pillows, cooked hot meals, and powdered milk to new mothers. The charity has also set up a mobile health clinic to distribute primary health care and necessary medication.

Workers are on the ground providing essential life-saving supplies including food, water, medical supplies, and emergency kits to families and children attempting to flee.

The charity is working with communities in Afghanistan to find long-lasting solutions as well as providing life-saving support during this crisis. This includes financial support, kitchen and hygiene kits, emergency food parcels, and items like solar-powered lamps, stoves, and gas cylinders to keep them warm.

They’ve launched an emergency crisis appeal through LaunchGood to help their team on the ground to distribute food, shelter, and living essentials to those in need.

The UK for UNHCR has launched an appeal for donations to aid the UN Refugee Agency as they continue delivering support for the thousands of displaced Afghan nationals across the country. UNHCR teams are currently providing emergency shelter materials, food, water, and sanitary supplies as well as addressing the needs of newly displaced citizens.

The International Medical Corps has been in Afghanistan since its founding in 1984, and has continued to provide emergency and primary healthcare as well as “training to build skills and resilience.” They currently have staff throughout the country to provide lifesaving aid.