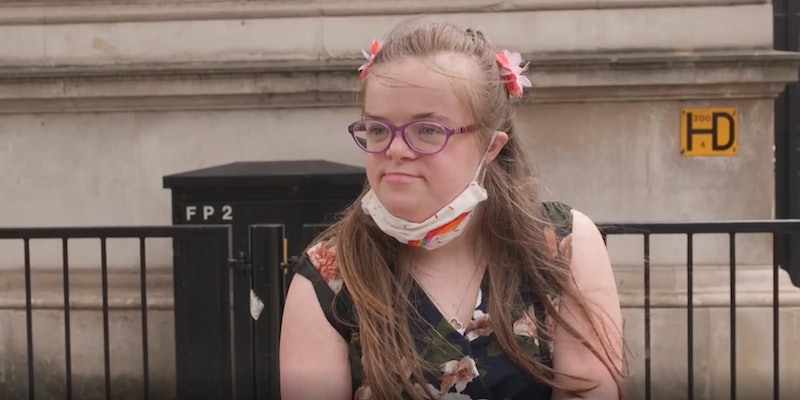 Heidi Crowter, a woman with Down’s Syndrome has taken the Government to court over a “deeply offensive” abortion law that permits the late termination of pregnancies where the foetus has Down's Syndrome.

As The Guardian reports, Crowter who hails from Coventry launched the legal challenge last year and will take on the newly-appointed Health Secretary Sajid Javid alongside fellow campaigners.

Read on learn more about the case and what Crowter’s legal challenge aims to achieve.

What are the details of the case?

Per the Daily Mail, Heidi Crowter, Máire Lea-Wilson, and her son Aidan, who also has Down’s Syndrome, are challenging existing abortion laws in the UK that were first introduced as part of the Abortion Act 1967.

During the case, which began at the High Court in London on Tuesday, July 6, the trio’s lawyer will argue that the Abortion Act 1967 is discriminatory and conflicts with the right to respect for private life in article 8(1) of the European convention on human rights (ECHR).

Addressing the High Court in London, Jason Coppel QC, who is representing the three claimants, explained that Crowter, who lives a completely independent lifestyle, has been “the subject of abuse” due to her disability, adding that “the existence of a law allowing abortion up to birth for babies with DS [Down’s syndrome] is a contributory cultural cause of this type of abuse.”

Crowter and Lea-Wilson raised over £100,000 in order to take the Government to court, and the hearing is scheduled to last for two days.

As it stands, the Abortion Act 1967 at the centre of the case allows pregnancy terminations after the time limit of 24 weeks if there is a “severe foetal abnormality” or a “substantial risk” the child could be “seriously handicapped.”

As noted in the Abortion Act 1967, the only other legal abortion permitted to take place after the 24-week period is if the mother is considered to be at mortal risk. As The Guardian reports, the High Court was informed by the claimants that Down’s Syndrome is currently the largest justification for late-term abortions.

Speaking of the Abortion Act 1967, Jason Coppel QC said the laws which fall under it perpetuate “negative cultural stereotypes to the detriment of people with disabilities, such as the first [Crowter] and third [Aidan] claimants.”

“They continue to suffer a serious diminution in the perception of the value of their lives, which affects all aspects of their day-to-day life. The effects of this negative stereotyping were also felt by the second claimant [Lea-Wilson] as carer and parent of the third claimant,” he added.

What have Heidi Crowter & Máire Lea-Wilson said about the case?

Speaking to the press outside London’s High Court on Tuesday, July 6, Crowter said she finds it “extremely offensive” that abortion laws in the UK don’t respect her life. “I won’t stand for it... I want to change the law and I want to challenge people’s perception of Down’s syndrome,” she explained.

Elsewhere, fellow claimant, Lea-Wilson, said she wants her son Aidan to “grow up knowing he’s not someone people have to cope with.” She continued, “he’s not a burden to society, he is a wonderful human being in his own right. And so I want the law to change so that the rules for a typical baby apply for those with Down’s syndrome.”

More like this
Gen Z Are Twice As Likely To Identify As Queer, According To New Data
By Sam Ramsden
Here’s What TikTok's "Mascara” Trend Is *Really* About
By El Hunt
Pret & Costa’s Coffee Is The Strongest On The High Street, According To Which?
By Sam Ramsden
Ben & Jerry’s New Sundae Flavours Are A Chocoholic’s Dream
By Sophie McEvoy
Get The Very Best Of Bustle/UK
Sign up for Bustle UK's twice-weekly newsletter, featuring the latest must-watch TV, moving personal stories, and expert advice on the hottest viral buys.