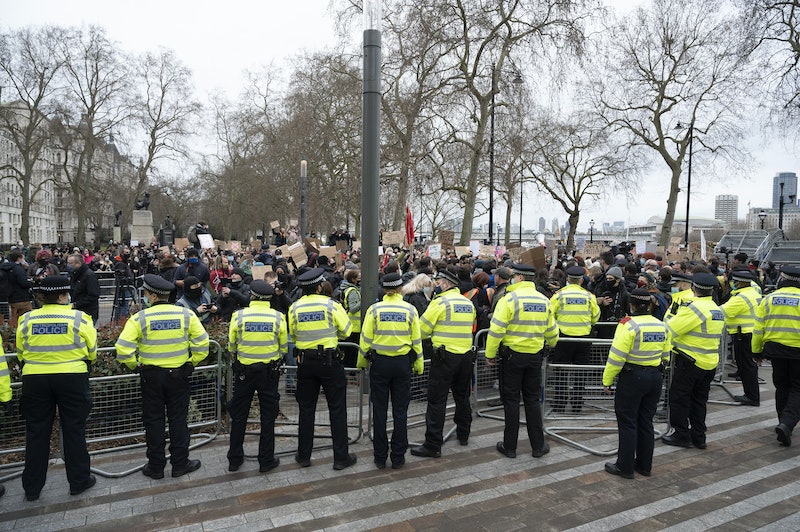 A bill ordered by Home Secretary Priti Patel that could see more power given to police at protests is heading for the House of Lords. The bill passed its second reading (the first chance MPs got to vote on a proposed law) on March 16 before MPs backed the legislation by 365 votes to 265 in a third reading on July 5. The Bill will now go to the House of Lords for more scrutiny before returning to the Commons.

In light of incidents that took place at a vigil for Sarah Everard on March 14, 2021, many are concerned that the new measures proposed in the Police, Crime & Sentencing Bill could mean protests or similar public gatherings will become more difficult to organise and less safe for attendees. So what is the Police, Crime & Sentencing Bill, why it was first proposed, and what it could mean for the future protesting in the UK?

What Is The Police, Crime & Sentencing Bill?

The Police, Crime & Sentencing Bill, which was introduced in the Commons on March 9, is a 307-page document proposing a number of changes to the way crime and punishment works in the UK.

According to the government, the bill will help "to crack down on crime and build safer communities" by giving police “powers and tools they need to keep themselves and all of us safe” as well as introduce “tougher sentencing for the worst offenders” and “improve the efficiency of the court and tribunal system.”

Some key provisions within the bill include doubling the maximum sentence for assault of an emergency worker and introducing life sentences for “killer drivers who wreak havoc on our roads.” Section four of legislation also aims to revamp trespassing laws which could see Roma, Traveller and Gyspy communities facing hefty fines up to £2,500 and a criminal record.

While dozens of amendments to the bill were rejected by Commons on July 5, it will now go to the House Of Lords for further scrutiny, where peers will have another chance to try to insert changes before the legislation returns again to the Commons. Some of the changes that could see a green light, via BBC News, include strengthening the law on pet theft and violence against shop workers. What’s more, ministers are considering whether harassment should be considered a separate offence.

According to the government’s “protest powers factsheet,” the Police, Crime & Sentencing Bill “will allow the police to take a more proactive approach in managing highly disruptive protests causing serious disruption to the public.”

Ministers also stress that they want to control demonstrations that cause “intimidation or harassment" or "serious unease, alarm or distress to bystanders".

It uses the Extinction Rebellion protests as an example.

The key provisions that are drawing the most attention are:

What Have Critics Said About The Police, Crime & Sentencing Bill?

A number of MPs, faith communities, charities, and human rights organisations have raised concerns about what they’ve described as the “anti-protest” bill, with Labour's shadow Home Office minister Sarah Jones saying the Bill "went too far".

Per BBC News, she said: "The point of protest is to capture attention, protests are noisy, sometimes they are annoying, but they are as fundamental to our democracy as our Parliament.”

The comments come in light of what took place at the Sarah Everard vigil on Clapham Common earlier this year. On March 14, women came together to mourn and protest the death of Everard, a 33 year old who went missing while walking home. A police officer has since been arrested and charged with Everard’s murder.

The police presence and actions at the Clapham Common vigil have been criticised and Prime Minister Boris Johnson has said he was “deeply concerned” by footage from the event. Videos showed women being dragged away, handcuffed, and forced to the ground. For this reason, there are worries that more police powers will make protesting even more unsafe for protestors.

Sisters Uncut (the direct action group that took over the organisation of the vigil after Reclaim These Streets had to cancel due to “lack of constructive engagement from the Metropolitan Police”) have made their opposition to the the Police, Crime & Sentencing Bill clear via social media. “The police abuse the powers they already have, yet the government plans to give them even more powers in the #PoliceCrackdownBill. We must resist,” they tweeted on March 14.

On June 22, MPs and Peers in parliament’s joint committee on human rights (JCHR) published a report that warned parts of the bill could go against human rights. The chair Harriet Harman stated: “One of our most fundamental rights is to protest. It is the essence of our democracy. To do that, we need to make ourselves heard. The government proposals to allow police to restrict ‘noisy’ protests are oppressive and wrong.

“The government put forward new powers in areas where the police already have access to powers and offences which are perfectly adequate. The government has served up confusion where clarity and precision is essential.”

The move to resist quickly sparked ‘Kill The Bill’ demonstrations across the country, including Bristol where hundreds gathered at Bristol’s College Green to demonstrate against proposed plans on March 22.

What began as a peaceful si- in turned violent. Avon and Somerset police issued a statement condemning the events, confirming that 20 officers were injured during the incident – two seriously – and seven arrests had been made.

Home secretary Priti Patel also condemned the “unacceptable scenes in Bristol” as well as the “thuggery and disorder by a minority” stating via Twitter, “our police officers put themselves in harms way to protect us all.”

The Bristol mayor, Marvin Rees, criticised the violence as counter-productive, via The Guardian, stating that the “lawlessness on show” will be “used as evidence and promote the need for the bill”.

After condemning the violence, he said: “I recognise the frustrations with the police, crime, sentencing and courts bill. I have major concerns about the bill myself, which is poorly thought-out and could impose disproportionate controls on free expression and the right to peaceful protest.”

Despite Labour Party leader Keir Starmer telling MPs to vote against the bill, according to the Guardian, stating the bill contained “next to nothing” on combating gendered violence, MPs backed the bill once again this July.

In response, Kill The Bill protests were reignited on July 7 outside Parliament Square to challenge the new laws.

Politicians including Diane Abbott and David Lammy have also spoken out against the bill.