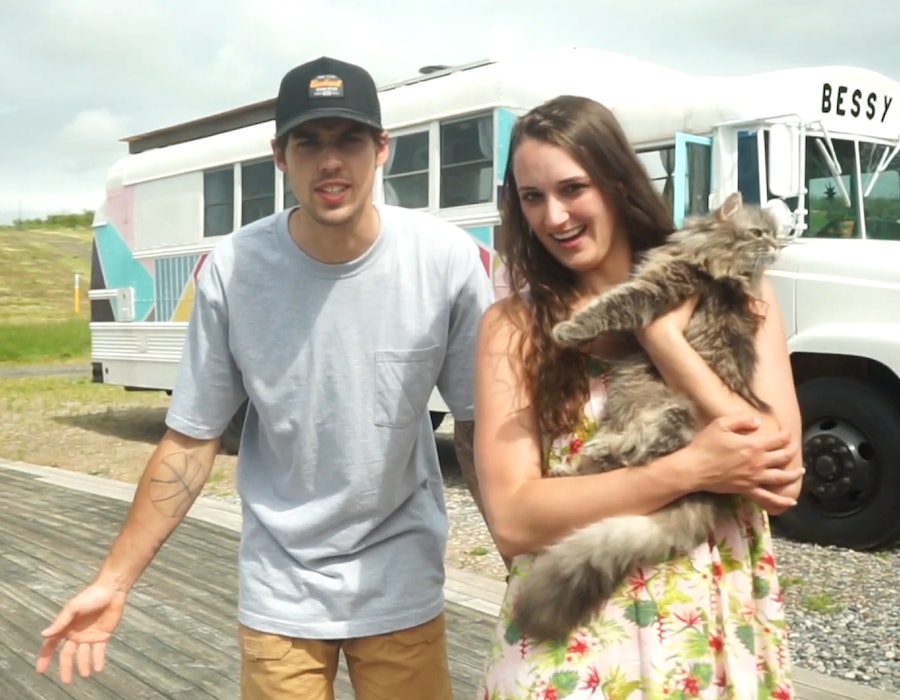 The pandemic has forced many Americans to rethink their priorities, especially when it comes to their living arrangements. The news has been full of stories of people leaving densely populated cities for quite literally greener pastures. And while COVID-19 and economic instability may have been an extra push to many, the growth of remote work opportunities coupled with revenue streams from content platforms like YouTube, Instagram, and TikTok has long been leading thousands of Americans to rethink the corporate rat race.

Kelsey Cuddy and Jamie Percival are among the wave of unanchored millennials and zoomers seeking a more active lifestyle outside a concrete jungle. The pair met while Kelsey was studying in the U.K. for her master’s. They spent eight months refurbishing a run-of-the-mill yellow school bus and have been on the road for the last few months. The pair took Bustle behind the scenes of their home to give us a glimpse of what it’s really like to live in a converted school bus.

Kelsey and Jamie nicknamed the bus Bessy and traded in the familiar mustard yellow for an abstract pastel color palette. They took an incremental approach to the bus life, living with Kelsey's parents for eight months while they converted the vehicle and spending several weeks acclimating to the tiny living arrangement. Some $26,000 and many little adjustments later, Bessy is full of enviable details. There's the roof deck for lounging, ample storage for basic needs, solar panels for electricity, a convertible work station, a fully functioning kitchen and shower, and most importantly that coveted minimalist aesthetic where everything has a purpose and no space is wasted.

Since embarking on the journey, they've traveled through nine states with the goal of hitting every single state in the United States. While their adventures have been full of unexpected delights, the couple also discusses the challenges of living on the road, from minor accidents to logistics of parking and refueling.

You can keep up with Kels and Jay’s travels on their Instagram, their blog, and their YouTube channel.

Relocated is a series from Bustle where we follow daring individuals who choose to live off the beaten path.