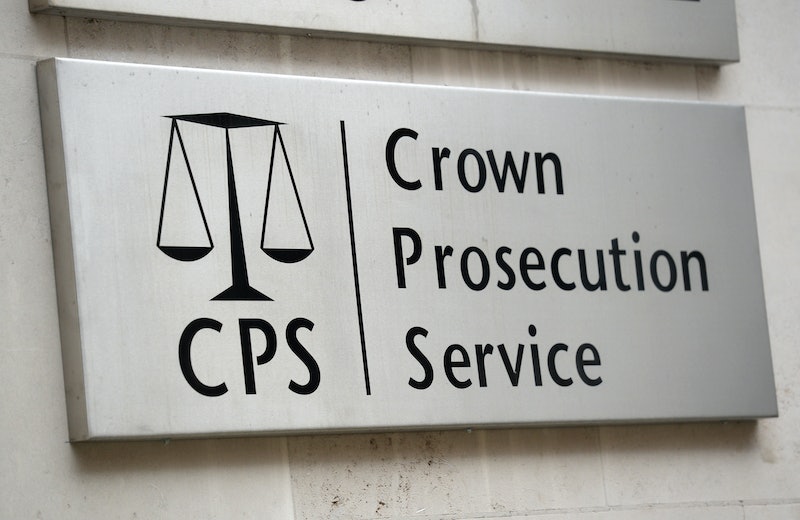 This week, a judicial review will look into accusations that the Crown Prosecution Service has dropped “weak” rape cases that it thinks are unlikely to win. The Centre for Women’s Justice (CWJ) and End Violence Against Women (EVAW) coalition first announced they’d be bringing legal action against the CPS in 2019, after a whistleblower revealed that rape cases were being routinely dropped in order to meet targets. Here's what you need to know about the Crown Prosecution Service trial on rape cases.

Bonny Turner’s case is being used in the trial; she was raped in 2016, but her case was later dropped. Speaking to Sky News this week, ahead of the judicial review, Turner said: “For me justice isn't just about the outcome – it doesn't come from thin air. Justice comes from a just process every step along the way, and I've not experienced a just system along the way.”

What Is The Case Against The CPS?

The case against the CPS will look at how rape is prosecuted in England and Wales and the way that victims of serious sexual assaults are treated. The Centre for Women’s Justice (CWJ) and End Violence Against Women (EVAW) have said that the CPS evaluates each reported rape, and only takes cases to court that it thinks will win.

An account of a CPS whistleblower was submitted to the court, detailing workshops they’d attended that focused on how to meet conviction targets by not taking on “hundreds of ‘weak’ cases from the criminal justice system, which are less likely to find favour with a jury.” The whistleblower's account said the CPS has “a new 'risk-averse' approach to the prosecution of rape."

The human right’s organisations that are bringing action against the CPS have raised over £100,00 to cover legal costs. After the High Court decided not to hear their case in March 2020, the Court of Appeal overturned that decision in July 2020. It’ll be brought before judges on Jan. 26 and 27.

What The Coalition Have Said

The coalition of human rights groups have said that the alleged change in prosecution practise is leading to a “collapse in cases going to court, discriminates against women and girls, and is a major failure to protect their human rights.”

Rape prosecutions are reported to be at a record low, per the Times, dropping year on year since 2016. According to the CPS, in 2018/2019 there was a 27% drop in rape convictions. The CPS said this was "due to a far wider range of factors involving the police that are now the subject of a government review,” and not a change in how the CPS prosecutes rape.

However, up until March 2020, reports of rape have increased by almost a third in four years, per the Guardian. It's during this same period that the rate of prosecution has fallen by 60% to the lowest figure on record.

"There’s huge concern about this sudden collapse in prosecutions, and although there are a number of different factors, the key factor we say is the training. They wanted to change the direction, and bring about a change of approach even if it was 'a touch on the tiller'," Harriet Wistrich, director of CWJ, told the Guardian. "The problem is, even if it’s just a very slight change, when you go from the top down it has a massive butterfly effect by the time it hits the bottom. The director of public prosecutions [DPP] seeks to blame the police, but in fact the police say they are tearing their hair out and building strong cases that still get dropped,” Wistrich added.

What The CPS Has Said

In response to the accusation that a change in practises has lead to a drop in rape cases going to court – in particular those cases that the CPS deem "weak" – the CPS said there’s been no change to its approach, per Sky News. The CPS added that an independent inspector didn’t find evidence of risk-averse decision making in choosing which cases to go to court.

A CPS spokesperson told Sky News: “The principles of the merits-based approach are enshrined in the Code for Crown Prosecutors, which guides every charging decision. Along with the police, we remain committed to making real, lasting improvements to how these horrific offences are handled, so every victim will feel able to come forward with confidence that their complaint will be fully investigated and, where the evidence supports, charged and prosecuted."

What The Victims Have Said

Ahead of the case being brought in front of the High Court, some rape victims have spoken about having their cases dropped. One victim told the Guardian that she was only 17 when her partner was physically and sexually violent towards her. Her case was dropped two years after she reported it. "I don’t have words for how betrayed I feel by the system," she said. "I feel like I was so silenced. I was gaslighted, essentially – gaslighted over and over again. It’s left me with more scarring because now he is walking around thinking that he’s won."

Another said she was held at gunpoint before being was assaulted. Years later she reported it, but her case was dropped. She told the Guardian that a letter from the CPS said while "it was clear that she had not consented, it was not clear her attacker had been aware of her lack of consent. The letter noted that she had not said 'no' to her attacker, and said the way she had described the incident with the gun 'indicated that it was not a serious threat.'"