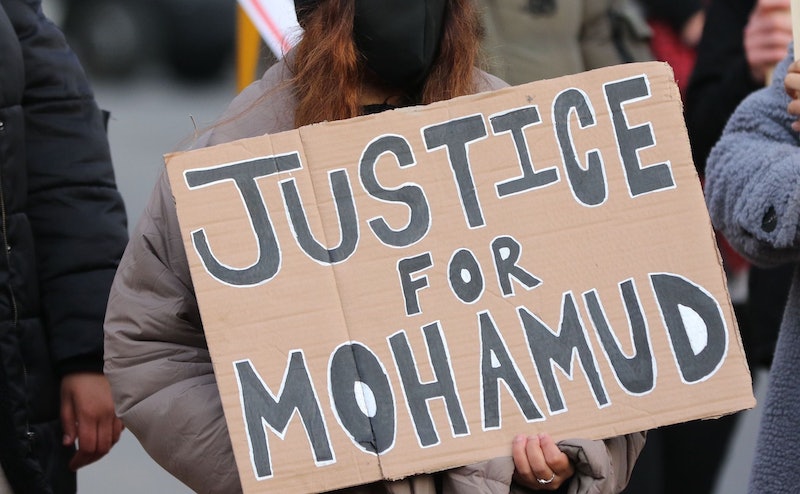 On Jan 8. 2021, Mohamud Mohammed Hassan was arrested after a disturbance was recorded in his home in South Wales. Hassan was released from Cardiff Bay police custody the following morning (Jan. 9), however, just hours later he was discovered dead in his home. Since then, an independent investigation has been launched into the circumstances around his death, but what is happening with Mohamud Hassan's case?

Hassan is described by his family as a "lovable", "fit and healthy" 24 year old who was soon to become a father. They believe that his death was a result of being assaulted whilst in custody and are now demanding answers and urging South Wales Police to release the police camera footage from the night of his arrest.

What Have Mohamud Hassan's Family Said About His Death?

On Jan. 11, Hassan's Aunt Zainab Hassan told BBC Wales that he was covered with "lots of wounds on his body and lots of bruises" when he was released on Jan. 9.

"He didn't have these wounds when he was arrested and when he came out of Cardiff Bay police station – he had them," she said to BBC News. "Nothing we do is going to bring him back but we will not rest for a second until we have justice."

The family's solicitor, Hilary Brown, says they have made a complaint to the IOPC.

"We want somebody to try to explain to us why a young, healthy man was arrested by South Wales Police with no apparent injuries to his body and as a result of being released from Cardiff Bay police station... he was badly marked with bruising and cuts, and within hours was dead," said Brown, via BBC News.

What Have South Wales Police Said About Mohamud Hassan's Death?

On Jan. 11, South Wales Police released a statement describing Hassan's death and "sudden and unexplained." They add: "Early findings by the force indicate no misconduct issues and no excessive force."

On Jan. 12 the IOPC released a statement explaining that "an interim report from a post mortem examination is awaited." It also stated that "preliminary indications are that there is no physical trauma injury to explain a cause of death, and toxicology tests are required."

The IOPC's Director for Wales Catrin Evans has said that his team want to "reassure people that [they] will carry out a thorough and independent investigation into the contact police had with Mr Hassan."

Evans added: "We will be keeping his family, South Wales Police, and the Coroner updated throughout the course of our investigation."

On Jan. 15 South Wales police constable Jeremy Vaughan released a statement to the press expressing his condolences to Hassan's family. "I know many people want to understand what led to his tragic death on Saturday, January 9, particularly the circumstances surrounding his arrest on the Friday before, his time at the police station, and his subsequent release from custody," he said. "We did this not because we thought that police officers had done anything wrong, but because it was the right thing to do."

He added: "As Chief Constable I am determined that we should pursue the evidence wherever it takes us."

Following increasing pressure to release both CCTV and body-cam footage, South Wales police state that it has "provided all relevant CCTV footage and body-worn video to the IOPC who are conducting an independent investigation" and "footage cannot be released by South Wales Police while the IOPC is investigating."

What Are Protestors Demanding?

Hassan's death has ignited protests and petitions from Black Lives Matter campaigners who believe the incident is an example of police brutality in the area.

Hundreds of protesters took to Cardiff Bay on Jan. 21 brandishing placards reading 'Justice for Mohamud' and 'All Lives Won't Matter Until Black Lives Matter.' At the time of writing (Jan. 27), more than 2,000 people have signed a petition demanding the IOPC to immediately release all police officer body camera and CCTV footage relating to the initial arrest. A woman is now facing a £500 fine for organising the protest outside Cardiff Bay Police station during the pandemic.

The petition, organised by Lee Jasper, former Deputy Mayor of London, argues that the "levels of trust" and "confidence" in the police have deteriorated further.

"British black communities have very little confidence in the processes of police complaints, independent investigations by the IOPC or the ability of the coroner's inquest process to deliver justice," he writes. "With huge national tensions developing between British black communities and the police, it is vital that there is complete transparency and accountability in relation to critical incidents that give rise to public concern."

He adds that "post the murder of George Floyd" and "the rise of our Black Lives Matter movement" it is vitally important that new standards of police accountability and transparency are put in place with immediate effect.

One signatory wrote, "Another black man has lost his life for no reason except Institutional racism from the top down. Nobody is ever held to account."

What Happens Next With Mohamud Hassan's Case?

During a First Minister's Questions (Jan. 12), Wales First Minister Mr Drakeford responded to the Cardiff protests stating he expects the IOPC investigation to be "done rigorously, and with full and visible independence."

He added: "I’m glad that the family have secured legal assistance to them in order to pursue their very understandable concerns.

"And if there are things the Welsh government can do – then I will make sure that we attend properly to those without prejudging in any way the outcome of the independent investigations that now need to follow."

The latest statement from the IOPC comes via The Voice on Jan. 25. They say the impartial and independent investigation is "ongoing" and still in its early stages.

"We have been provided with a preliminary post mortem report and initial toxicology results. We also have extensive footage including body-worn video and CCTV from multiple cameras and various sources including local authority, the police force and private outlets," a spokesperson told The Voice.

"We are painstakingly reviewing all of this evidence in order to help piece together what happened and this essential work will take some time. At this stage of the investigation it would not be appropriate to discuss any further evidential detail."

More like this
Here’s Where The NHS Nurses’ Strike Currently Stands
By Sophie McEvoy
Gen Z Are Twice As Likely To Identify As Queer, According To New Data
By Sam Ramsden
What The UK Blocking Scotland’s Gender Recognition Bill Means
By Sam Ramsden
The UK Government Is *Finally* Banning Conversion Therapy
By Sophie McEvoy
Get The Very Best Of Bustle/UK
Sign up for Bustle UK's twice-weekly newsletter, featuring the latest must-watch TV, moving personal stories, and expert advice on the hottest viral buys.