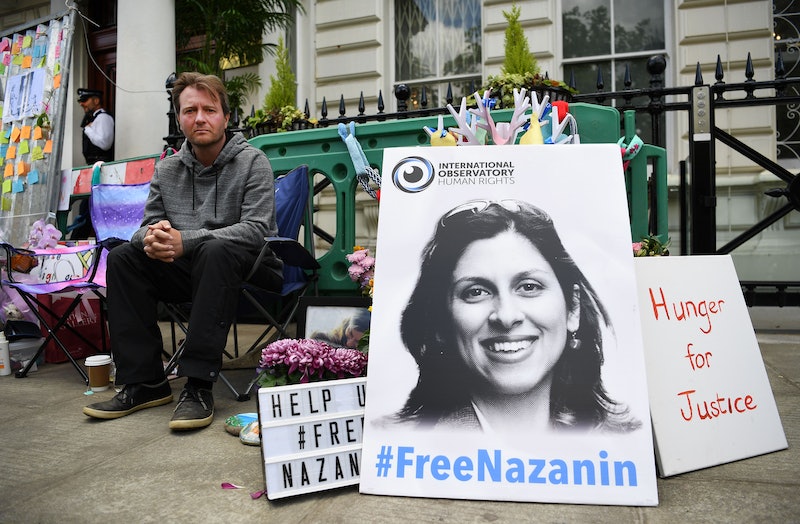 On April 3, 2016, Nazanin Zaghari-Ratcliffe was arrested by members of Iran's Revolutionary Guard while attempting to return to the UK from Iran with her then 22-month-old daughter. For five years, her husband Richard Ratcliffe and her family have been fighting for her release. On March 7, 2021, it was reported that, after serving five years in prison and under house arrest at her parents, Zaghari-Ratcliffe had been released. . However, just a few days afterwards, on April 26, she found out her sentence had been extended by another year, and has since lost another appeal for release by an Iranian court in October. As Richard Ratcliffe’s vows to continue his hunger-strike in support of his detained wife, here’s what is happening with Nazanin Zaghari-Ratcliffe right now.

Who Is Nazanin Zaghari-Ratcliffe?

Prior to her arrest, Zaghari-Ratcliffe was a project manager for the Thomas Reuters Foundation, a charitable arm of the Canadian news conglomerate that worked to "advance media freedom, foster more inclusive economies, and promote human rights." Before this, she worked for the BBC World Service Trust (now known as BBC Media Action), an organisation that aims to "strengthen the capacity of journalists, and others working in media and communication, through training and long-term mentoring."

The reasons behind Zaghari-Ratcliffe's initial arrest were not known at first, but after two months the Iranian authorities accused her of being (per the Guardian) "a ringleader in a revolt against the Islamic republic" and running "a BBC Persian online journalism course which was aimed at recruiting and training people to spread propaganda against Iran."

Zaghari-Ratcliffe, her family, the BBC World Trust, her current employer, and the UK government strongly denied the charges against her. Her work for the BBC World Service Trust was purely administrative; she helped book Iranian and other students onto courses, and she was in Tehran with her daughter for a family visit only.

Following her first arrest, Zaghari-Ratcliffe was reportedly placed in solitary confinement. Amnesty International states that Zaghari-Ratcliffe was denied access to a lawyer until three days before her trial in September 2016. She was sentenced to a five-year prison term in Tehran's Evin Prison and has since "suffered a serious decline in her physical and mental health" as Amnesty International writes.

In an open letter written in September 2016, Zaghari-Ratcliffe described the heartache she was feeling after the decision was made that her daughter should return to the UK to start school. "I have no hope or motivation after my baby goes … There is no measure to my pain," she wrote.

In March 2020, Zaghari-Ratcliffe was granted temporary release due to fears for her safety when the coronavirus crisis hit Iran. She served the last year of her sentence under house arrest at her parent's house.

What Is Happening With Her Case Now?

After serving five years for the charges brought against her in 2016, Zaghari-Ratcliffe was released in April 2021. However, just a few days later, she was found guilty of new charges. The Iranian court has accused her of being involved in propaganda activities against the Islamic Republic for allegedly attending a demonstration in London outside of the Iranian embassy in 2009.

This has result in a year-long prison sentence and an addition year-long travel ban. These are separate charges from her first arrest.

Efforts to appeal these charges have failed, meaning Zaghari-Ratcliffe could be sent back to prison at any time. Although she is currently at home with parents, her husband told the Guardian on Oct. 16, “Technically, she’s now just waiting for the phone call, saying, ‘Turn up at this prison on this day’. There’s a sword hanging over us now, it will at some point fall. It’s clearly a signal that the ball’s in the government’s court to do something.”

What Is The UK Government Doing?

In August 2016, then-prime minister Theresa May reportedly "raised concerns" with the Iranian president, Hassan Rouhani, but to little effect. Since then, the UK government's efforts have continued to fall short of securing Zaghari-Ratcliffe's release.

Boris Johnson has been widely criticised for hindering Zaghari-Ratcliffe's chances at freedom due to a statement he made as foreign secretary in November 2017. Johnson mistakenly said that Zaghari-Ratcliffe was “simply teaching people journalism” during her time in Tehran, something she, her family, and her employer have always vehemently denied. He later issued an apology and confirmed that Zaghari-Ratcliffe was visiting Iran for a family visit only. Johnson visited Tehran in December 2017, but was unable to secure anything concrete.

Zaghari-Ratcliffe's husband and lawyers have been critical of the government's response to her arrest. In a January 2020 feature for the Guardian, Richard Ratcliffe told the newspaper: "The government’s failure to settle this case is not because they do not care. It is because they do not care enough. There is no lack of sympathy, it is just that sympathy is not going to get us home."

In March 2019, Johnson's successor Jeremy Hunt announced that Zaghari-Ratcliffe would be given diplomatic protection "making the case a formal, legal dispute between Britain and Iran," the BBC writes. The BBC's diplomatic correspondent James Landale said that, although this new status will not force Iran to do anything, it will allow Britain to more easily raise Zaghari-Ratcliffe's case in international spaces such as the United Nations.

In response to the latest charges in April 2021, Johnson wrote in a tweet that Iran’s decision “cruel, inhumane and wholly unjustified,” adding Zaghari-Ratcliffe “must be allowed to return to her family in the UK and we will continue to do all we can to get her home.”

Richard Ratcliffe has resigned to extreme measures as result of his “disillusionment” with the UK government’s strategy to bring Zaghari home. Three weeks after his wife lost the appeal against her latest conviction, he began another hunger strike that he hopes will urge the UK government to act. As of Friday, Nov. 5, he had completed 13 days of his hunger strike and is reportedly determined to continue. “This is not a coup. It is not a game, but a hunger strike,” Richard Ratcliffe told reporters outside theForeign, Commonwealth and Development Office (FCDO) in London, where he also sleeps in a tent.