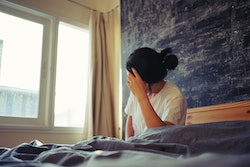 After four years, two general elections, Brexit, and a pandemic the UK's Domestic Abuse Bill is finally in the last stages of going through parliament. It’s been described as a once in a generation opportunity and hailed as life-changing for abuse victims and their families.

While it’s taken a long time to get to this point charities have highlighted that it couldn’t come at a more essential time, as the UK enters another lockdown and those vulnerable to abuse may feel trapped at home with perpetrators. For the first time, the Domestic Abuse Bill will create a statutory definition of what abuse is that will include economic, emotional, coercive, and physical abuse.

What Is The Domestic Abuse Bill?

First published in 2019 by Theresa May’s government, a draft of the bill laid out “123 commitments, both legislative and non-legislative,” the government writes. These were designed to:

The bill includes an amendment that rules out “consent for sexual gratification” as a defence, which will ban abusers using the "rough sex defence" when committing serious harm in England and Wales.

On March 1 the government announced that the bill would also include an amendment which will mean abusers who use non-fatal strangulation could face up to five years in jail. The Guardian reported that one of the main concerns was that strangulation and suffocation doesn’t always leave visible injuries. This makes it difficult to prosecute under existing laws. Similarly, threatening to share intimate images and videos is set to become an illegal offence.

Where Does The Bill Currently Stand?

After going through the House of Commons and House of Lords where a number of amendments were proposed, the Domestic Abuse Bill is expected to receive royal assent this week (ending May 1.)

The bill is in its last stage before being inscribed into law and some charities have shared their thoughts on ensuring that it's as effective as possible. On March 1 the government took on the recommendations of the charity Refuge who said it must consider image-based sexual abuse and coercion. The charity runs the National Domestic Abuse Helpline and said, “threats to share intimate images of survivors can have devastating, long-term consequences. Until sharing intimate images without consent is explicitly outlawed, these threats will continue to be used by abusers as a tool of coercive control.”

In a statement about the change, Hetti Barkworth-Nanton, chair of Refuge said: “This is a significant moment for women experiencing domestic abuse who have been threatened with the sharing of their private intimate images, and we are thrilled that the government has recognised the need for urgent change. Our research found that 1 in 7 young women have experienced these threats to share, with the overwhelming majority experiencing them from a current or former partner, alongside other forms of abuse.”

While Refuge acknowledges this amendment is a step in the right direction, the charity added that the bill must also make sure to protect migrant women, regardless of their immigration status, from homelessness when fleeing an abusive situation.

Similarly, the government has been criticized for not pursuing legislation as part of the Bill which would create an automatic register for domestic abusers and stalkers. The Guardian reported that instead of creating a specific stalking registry the government has pledged to improve procedures already in place that monitors dangerous stalkers and abusers.

Laura Richards, the founder of stalking advisory service Paladin told the Guardian, “That is a huge insult to victims and families and all of us who’ve been campaigning on this. It does feel like the backstep, because there is no mandatory inclusion of serial offenders.”

It’s expected that the Domestic Abuse Bill will receive royal assent and be inscribed into law before the start of May 2021.

The bill is a massive step in the right direction for providing victims and their families with the support they need and deserve. Domestic abuse organisations have argued that the bill is particularly essential at the moment as a result of restrictions relating to the pandemic.

It’s estimated that two women a week are killed at the hands of their current or ex-partners in England and Wales. However, in the first three weeks of lockdown the charity Counting Dead Women reported that 14 women were killed by men. Women's Aid said that of the people they spoke to who were living with their abuser during lockdown, 61% said the abuse had worsened. The National Domestic Abuse Helpline reported a 66% increase in calls, and Refuge saw a 957% increase in web traffic in just three weeks in May.

While lockdown has been the best option to ensure people are safe from COVID-19, it’s locked many victims inside with their abusers, cut off from support, and their loved ones. The government has provided £30 million in extra funding to support and rehouse victims of abuse.

The pandemic has already delayed the Domestic Abuse Bill, but by the end of this week the final form may be written into the law.

More like this
Here’s Where The NHS Nurses’ Strike Currently Stands
By Sophie McEvoy
What The UK Blocking Scotland’s Gender Recognition Bill Means
By Sam Ramsden
Gen Z Are Twice As Likely To Identify As Queer, According To New Data
By Sam Ramsden
The UK Government Is *Finally* Banning Conversion Therapy
By Sophie McEvoy
Get The Very Best Of Bustle/UK
Sign up for Bustle UK's twice-weekly newsletter, featuring the latest must-watch TV, moving personal stories, and expert advice on the hottest viral buys.

This article was originally published on July 7, 2020