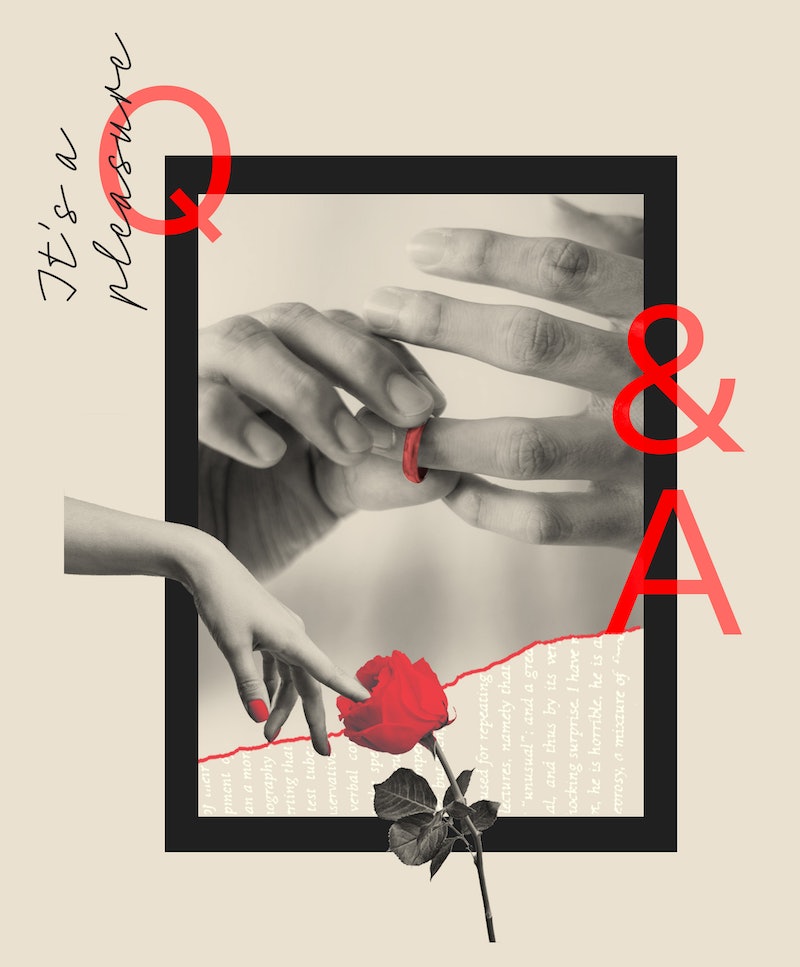 Q: I have been involved with a married man for almost seven years. It started off innocently: I contacted him after moving across the country to the city where he works, where I barely knew anyone. He was an old college boyfriend, and things ended amicably — I’m friends with all my old boyfriends. I had a couple hours before picking my child up from school, and invited him for lunch. I had been to the gym, hadn’t showered, no makeup — was not trying to impress, just thought we would trade pictures of our children and catch up. We didn’t end up meeting that day, but started texting. We texted for four months before finding the time to meet. When we did, things changed quickly.

My husband cheated on me, and I would have bet my life I would never be in this position. I was always a firm believer in closing one door before opening another. You can call me naïve or stupid, but I thought this man and I would work on ending up together. However, he hasn’t left his wife. This man says I am and always have been The One, but he will not be selfish and ruin his children’s lives (the youngest of the three is 20 and in college). He says they are his heart and soul and it would kill him to destroy their opinion of him. It would also destroy him financially. He insists there is a someday for us — he says three years minimum. In the meantime, I get to see photos of him and his wife in Aruba and California and Florida, at events, etc., not at all looking pained to be there. I love him, but waiting is killing me. Do you trust that? Would you have your heart broken every weekend, holiday, event, vacation? Most importantly, where do I find the strength to say, “Find me when you’re ready for something serious with me and me only?” Which I do say constantly — but cannot stick to? It’s been a happy/lonely six and a half years. I don’t want to waste any more time if he isn’t serious.

A: The man IS serious — ABOUT HIS WIFE. He’s very, very, very seriously in a relationship with his wife. I do not care one bit what he has told you. It means nothing. Zero. Look, I am sure that on one level he would love to end things with his wife and magically be taking you to Aruba. I would also love to move to Rome. It’s not going to happen! The logistics just aren’t there and they never will be unless I upend every single part of my life or magically come into millions of untaxed dollars. People do not, as a general rule, like to upend their lives. It hurts so bad. It hurts them and it often hurts the people they love. It’s why we hate breakups and firings and death and endings of all kinds. The prospect of your children hating you and losing all your money is grave indeed. On top of that, he has absolutely no — NO — reason to end his marriage and be with you. Why would he? He’s getting everything he wants from you anyway. In fact, he’s getting more! He doesn’t have to put you in his will or show up to the bad, scary doctor’s appointments. He doesn’t have to be a sparkling conversationalist at your work holiday party or navigate your dad’s poor boundaries. He doesn’t have a single reason to end things with his wife to be with you. He’s already with you.

You might be thinking, “Oh, Sophia, but he does have a reason! My feelings! My wishes!” He doesn’t care. He does not care about your feelings any more than he cares about his wife’s feelings. And let’s remember something: he has been cheating on his wife for at least six and a half years with at least one person. (I’ll let you fill in the rest of my implications of the words “at least” with your imagination.)

I’m going to give you some real tough love. I know that receiving tough love frankly sucks, but if I were in your shoes, reaching out to someone for advice, I would want to hear the actual excruciating truth of it. I’m not saying I’m right and you’re wrong or that I understand something about your situation that you don’t, but I am about to be honest about my take.

Despite his words, this man’s actions could not make it clearer that he is not and never will be serious about enacting the changes required for you two to have a life together. (Just the two of you.) Many, many, many people get divorced and remain on good terms with their kids — maybe not after they cheat for a decade but sometimes even then! I suppose I could understand that a person might be reluctant to divorce when they had young children. (As a child of divorce, I don’t think it’s actually as big of a deal as parents think, but whatever!) But his youngest child is 20! Twenty years old. Old enough to get married and divorced themself! If he were actually worried about his children’s opinion of him, he wouldn’t have been cheating on their mother for six and a half years. I think that excuse is full bullsh*t. I don’t know about his finances, but it seems like they’re more important to him than anyone in his life’s feelings (including you). In short, I think this man is both cruel to the people around him and ultimately a weenie. If I had money to burn (even move-to-Rome kind of money), I’d bet a good chunk of it that this man will never leave his wife.

There is already a person out there who believes their “love” with him is enough. That person is going to freaking Aruba.

But ultimately that doesn’t matter to me. Enough about him! Let’s get to you. I don’t think you’re naïve or stupid. I think you’re hiding behind those words and your perception of the relationship’s beginning — as you see it, innocent and not your fault — in order to evade any kind of responsibility for your actions. I think you’d vastly prefer for me (and anyone else who you’ve told about this relationship) to focus on the facts about how things started rather than interrogate what came next, which is, to be clear, years of you making the same choices over and over.

I am not here to be a moral compass for you or anyone else. If you want to participate in the harm of others and harm of yourself for years, that is up to you to square away. All of us do bad things, all of us harm other people. But I think it’s seriously worth being honest about your role here. You are participating in an affair just as much as he is. You are part of the harm to this family. You can try to put as much of the blame on him or on “love” as you’d like. But the truth remains the truth. You’re doing something that’s not great.

I think it’s worth noting that this is the same exact type of harm that was done to you all those years ago. It might not feel as fresh right now, but you must know how painful it is to be on the other end of an affair. I can’t tell you what you owe his wife, and it’s certainly possible — or likely — that if you hadn’t been with your partner, he would have found another person to cheat with. I also understand fully that you believe you are each other’s person, and the fact that he is married is heartbreaking to you. To me, that doesn’t absolve you. There is already a person out there who believes their “love” with him is enough. That person is going to freaking Aruba.

Do I think you’re rotten and deserve to suffer for all of eternity? No! No, no, no! I don’t think you’re evil for falling for someone who is married to someone else. I absolutely believe you’re allowed to wallow in the sadness, injustice, and grief of this situation. But it’s unfair for you to think that what you’re doing is fine simply because he keeps claiming he’ll leave his wife after many years of being with you behind her back. The situation is not fair or kind or loving to either of you! Instead of treating one person with love, he’s treating two people with the false approximation of it. He should not have gotten involved with you seven years ago. He could have stopped talking to you because it was disrespectful to his marriage, gotten divorced, sorted his feelings out with a therapist, figured out why he wanted to cheat on his wife, leave, and then once all that was addressed, come back to you. He didn’t because he’s a coward. But you are in this, too.

You are giving up everything for a man who won’t risk anything for you.

I would hope that if I were doing something so selfish, so painful to others — and it seems to me that when she finds out, she will find it very painful — that it would at the very least bring me pure joy. I would hope that if I were willing to risk my character for something, as you are doing, it would make me happy, happy, happy, happy. Or it would, like, save someone’s life or get me a $7,000 Target gift card. Instead, you sound miserable. This relationship sounds awful. It’s not the relationship of anyone’s dreams, least of all yours. How would you feel if your own child got into a relationship like this? You’d probably pull out your hair and stamp your feet and wake up at midnight to scream at the sky. I know I would. I would be irate if my child behaved like this. As if you have no control, as if you have no choices, as if this dipsh*t man who treats you poorly is worth your good character and years of your life. You are giving up everything for a man who won’t risk anything for you.

I’m begging you to leave this man, block him on every single platform that exists including LinkedIn, and start living your life for yourself. Should you leave and this man responds by actually leaving his wife — which would shock me — please ignore him. He’s a cheater and a coward and he is only realizing that his manipulation game with you was up. He has had the option to leave for years and yet he hasn’t. You have bountiful evidence that he is not a good partner. You deserve a good partner.

Leaving him will be painful, and it will probably force you to ask yourself hard questions, but it can also be a turning point. You can choose to put yourself first, to recognize the hurt you’ve caused and the hurt others have caused you, and to dig into why this relationship worked for you for so long despite being half-alive. As you get those answers, so much will come into focus: your own happiness, your own needs, your own goals, your own timeline. Dare to imagine the life you want. Start building a world in which there is only space for people who love you well.