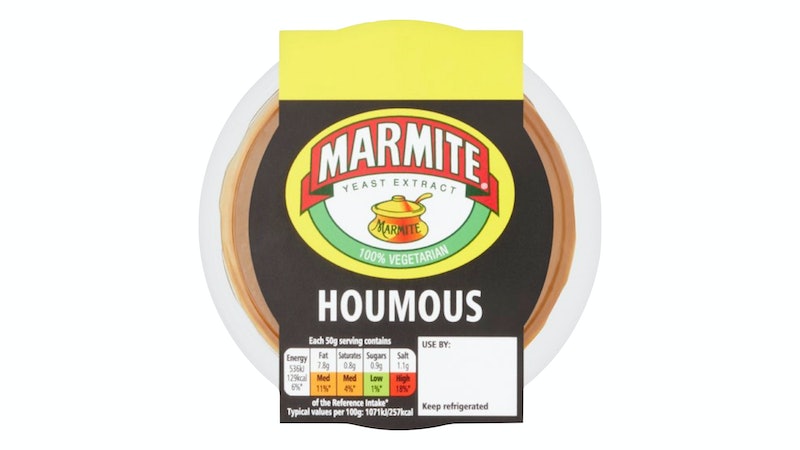 You know when you look at some new-fangled invention and wish you'd been bright enough to create it? Well wait until you hear about Marmite Houmous, the latest combo product to hit the shelves at Tesco.

Allow me to stoke the fires of controversy and say that the much-beloved puree of chickpeas, lemon, garlic, tahini, and olive oil can be kind of boring. So news that Tesco are currently selling a considerably improved version (well for Marmite fans anyhow) is a breath of flipping fresh air.

For many, the mere scent of Marmite will send the saliva glands into overdrive. This means that any utterance of a product impregnated with its umami-laden goodness will have them rushing to the shops screaming "TAKE MY MONEY." Luckily for those on a budget, this 200g tub of heaven comes in at a pocket friendly £1.50. Meaning you can buy several at once.

However, reviews of Marmite Houmous have of course been as divided as you'd expect. On one side you've got Twitter users professing their excitement and delight. On the other side... well, I've not seen such vitriol in quite a while.

Aside from the fact that haters gunnna hate on Marmite no matter the product, one slightly controversial factor being flagged by many Twitter users is that Marmite Houmous contains dairy. "As @marmite and houmous are famously both vegan why on earth does Marmite Houmous contain cow's milk?" one disappointed tweeter wrote. Another said: "Marmite is vegan. Hummus is vegan. Why the F*CK isn’t Marrmite Hummus vegan?!?!"

However, if any plant-based Marmite fans feel a bit forlorn, remember that Marmite Peanut utter exists and, yes, it's vegan.

Marmite Houmous
Tesco
Two classics in one tub.
More like this
Tacos Are Chef Kay Kay’s True Love Language
By Maxine Harrison
The Finger Lickin’ Good KFC x HYPE Collab Serves A Bucket Bag For Chicken
By Darshita Goyal
I Tried The $20 TikTok Viral Oishii Strawberries — Here's What I Thought
By Sophie Hanson
Trust Me, Pickle Martinis Are The New It Drink Of The Season
By Emma Carey
Get The Very Best Of Bustle/UK