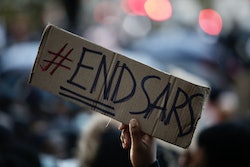 America isn't the only country going through a wave of popular demonstrations against police brutality. The End SARS protests in Nigeria, demanding the disbanding of and accountability for the notoriously violent Special Anti-Robbery Squad (SARS), began in early October after a man was reported killed during a stop-and-search operation on Oct. 3. They've now captured worldwide attention; people like Beyoncé and Chimamanda Ngozi Adichie have expressed their solidarity and fury, with Adichie writing in The New York Times, "Nigeria is murdering its citizens." SARS was officially disbanded by the government on Oct.11, but demonstrations continue, demanding accountability and changes in the Nigerian security forces. It can be difficult to know where to donate to help SARS protestors, but there are a few places that can help.

SARS was formed in 1992 as an anonymous, elite crime unit of 15 officers whose official mandate was to combat armed theft, Al Jazeera reports. Since then, the BBC reports, SARS officers have been accused of robberies, attacks, and murders, and are known for targeting innocent citizens, according to The New York Times. In October, the #EndSARS movement became a phenomenon, with demonstrators in Nigeria and ex-pats showing up in the thousands, as well as taking to Twitter to demand attention from celebrities and politicians. The movement has been spearheaded in part by several women, DJ Obianuju Catherine Udeh (known as DJ Switch), writer Jola Ayeye and podcaster Feyikemi Abudu, who've been filming police violence and organizing medical help and funds, according to TIME.

The government has previously promised to disband SARS and done nothing, Amnesty International reports. "Such abuses will only be prevented when SARS officers are held to account for their actions and face disciplinary or criminal punishment," Osai Ojigho, director of Amnesty International Nigeria, said in a statement. And activists across Nigeria still face curfews, governmental bans on gatherings, and violence from security forces. On Oct. 22, at least 12 people were shot and killed at a protest at Lekki Gate in Lagos, Nigeria's capital, Amnesty International told the BBC. Witnesses told Reuters that soldiers were seen firing directly into the crowd.

It's hard to feel as if you can do anything to help — but here are some places to donate to help out SARS protesters.

Both Ayeye and Abudu are part of Feminist Coalition, a collective in Nigeria formed in July 2020 to protest against police brutality. They're at the forefront of fundraising for the demonstrations, collecting donations via bitcoin. Thus far they've raised over $200,000, per a graphic posted on their Twitter, and have pledged to be fully transparent about how they use the donations. If you're not familiar with how to donate via bitcoin, you can also donate via GoFundMe.

Nigerians away from their home have formed Nigerian Diasporans Against SARS to collect funds to fuel the fight against SARS and demand real change. They use their donations to fund grassroots organizations like Feminist Coalition, medical supplies company LifeBank, and Nigerian philanthropists The Kokun Foundation, all of whom are dedicated to helping activists. They've also published a full disbursement record of how they're spending donations on their Instagram, so you can see where your money is going.

The Assata Collective is a mutual aid fund raising money to help queer and transgender Nigerians in the fight against SARS. It's based in the American South, and they're sending funds directly to queer Nigerians who've been impacted by SARS and the protests. LGBTQ+ people in Nigeria have regularly been abused by SARS officers, Michael Blaise, a Nigerian queer activist, told OUT Magazine — but they're also facing violence from other people at marches. You can find a PayPal and Cash App to donate to on their Instagram, and they're committed to being open about where the donations are going, without endangering any of the recipients.