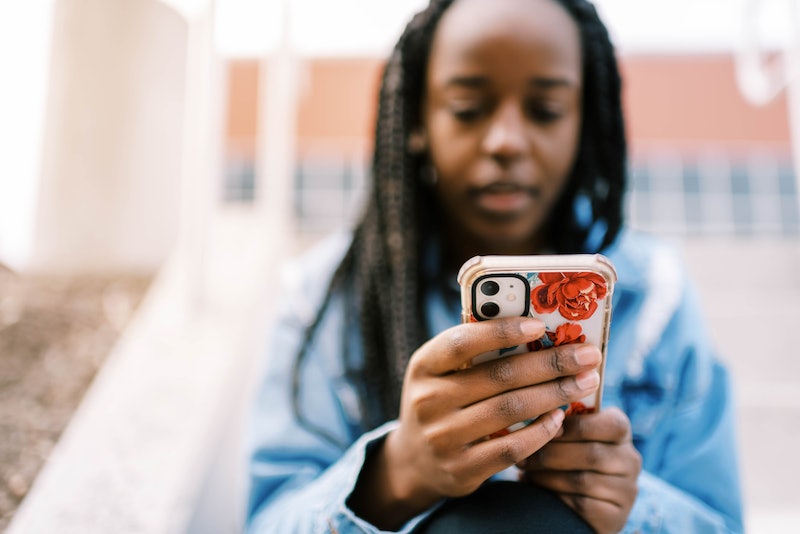 Though you might have had a brief affair with phone calls from time to time, friends and family typically know to text you if they need you. So when your phone comes to life with a call from an unknown number, you might get an exotic rush of “who is calling me?” nerves. More often than not, that number you haven’t saved is probably spam — even if it’s familiar looking.

Since at least 2017, per NPR, mobile phone users have been receiving calls from phone numbers that mimic their own (think: your area code and the first three digits of your number). If you’ve been asking yourself, “why do I keep getting calls from numbers similar to mine?” and hoping it’s some kind of numerology magic, you’ll be disappointed to learn that it’s just a clever tactic that spammers use to get you to pick up. And it works.

“This is a scammer's way of trying to evoke an emotional response and inspire you to answer your phone,” cybersecurity expert Kristina Podnar tells Bustle. “After all, studies show that if we see a phone number similar to ours, we will answer it.”

Getting calls from phone numbers that look like yours, but aren't loaded into your contacts, might make you curious enough to answer. Maybe a loved one was hurt and it’s the local hospital. Maybe your partner lost their phone and borrowed a stranger’s to get in touch. Or maybe you left your journal at a café and the person who found it (and who now knows all of your secrets) is trying return it to you. Or something.

The tactic is called “neighborhood spoofing,” and is used by robo callers and marketers. It works via scammy programs that make their outgoing phone numbers appear to be from the same area code as the person they’re try to reach. By calling someone who may not realize it's a scam and saying they need to hand over their bank account or credit card details, the scammers dupe people out of their cash.

These scams do work. "Grandparent scams" pinpoint senior citizens, asking for money and sometimes succeed at robbing grandparents’ bank accounts by posing as a family member. In one case from 2017, a 82-year-old grandmother lost $32,000 from a scam. A 2020 survey by Truecaller Insights, an app that blocks spam calls, found that in the last year, as many as 56 million Americans have fallen for a phone scam and lost money as a result. That number is up from 43 million in 2019.

While neighborhood spoofing might seem a totally illegal practice that should be stopped, Podar says that the Federal Trade Commission (FTC) has a tough time tracking these scammers and spammers down, as many of them are overseas. “The FTC doesn't even have authority over their geographic location,” she adds.

Podnar advises not to answer your phone if you don’t recognize the number, as a legit caller will leave a message and give you an opportunity to call back. You can also register your number with the National Do Not Call Registry, which tells telemarketers not to call you, but doesn’t block them from doing so. “It is doubtful that scammers will comply with the request, but it might help you to screen out some telemarketers and deal with the scammers more easily.”

While a call from a number similar to your own might be tempting to pick up, it's probably not worth answering. Send that baby to voicemail and screen all unknown calls before dealing with any robotic voices.

More like this
26 Ghost Story Podcasts To Get You Ready For Halloween
By Jessica Booth, Mia Mercado, JR Thorpe and Emma Carey
20 Smart Devices Under $35 That’ll Change The Entire Vibe Of Your Home
By Emma Carey
Here's How To Get Your iPhone To Update Automatically Forever
By Emma Carey
Why Everyone Is "Soft Tagging" Friends On Instagram Right Now
By Alexis Morillo
Get Even More From Bustle — Sign Up For The Newsletter

This article was originally published on May 8, 2018